Uncovering the mysteries hiding in your favorite snacks.

How to Be a Femme Fatale 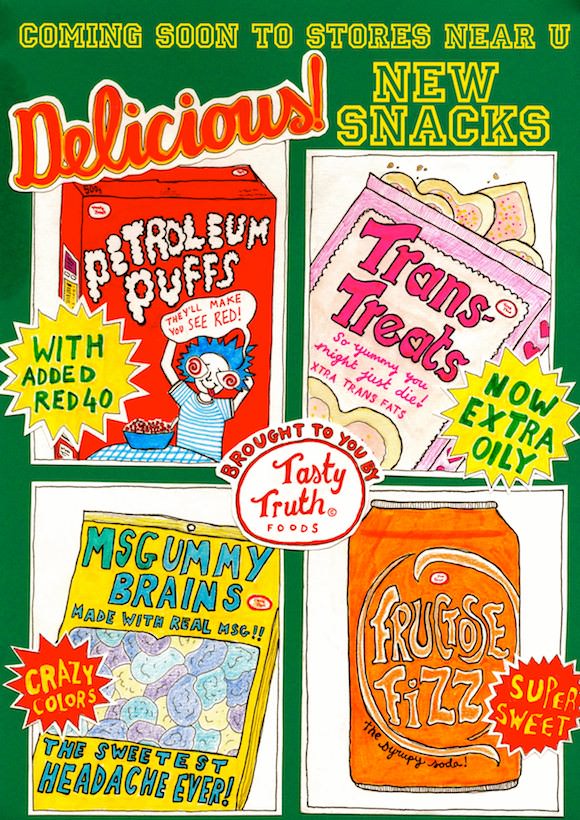 It’s another full, normal, ridiculously busy day. You get up at 6 AM (this, in itself, is enough of an accomplishment to warrant going back to bed). You go to school, take a math test, present your biology project, and maybe head to basketball practice/play rehearsal/a tutoring session. You clatter into the kitchen the second you get home, throw your backpack on the floor, and open the fridge. You have tons—TONS—of homework, but you’re STARVING and you need a snack immediately before you can even think about doing anything else.

You pour a glass of milk, and stir in some high-fructose corn syrup, corn syrup, water, cocoa, sugar, potassium sorbate, mono- and diglycerides, xanthan gum, polysorbate 60, vanillin, artificial flavor—if your mom keeps it in the house.

I love snack food. Pretty much all of it. I especially love Oreos, chocolate milk made with Hershey’s syrup, and Cool Ranch Doritos, which are, in order, the components of this particular after-school snack. These foods have a few things in common—they’re the edibles Most Likely to Be Found in a Really Good Snack Cupboard, they’re PROFOUNDLY DELICIOUS, and they’re processed food.

People talk a lot about processed food these days. We hear about it all the time, and never really in a good light. But what is processed food, anyway? What’s all the fuss about?

Processed food just means food that’s been modified in any way that alters its original form. If you cut up a banana and put it in your freezer to make smoothies with later, you’re processing it. Food is processed for lots of different reasons—our orange juice is pasteurized, for instance, which means it’s heated to kill harmful bacteria that might be lurking in it. Processing can be a good thing.

When the media talks about processed food, though, they’re often referring in a negative way to food that’s been through a LOT of treatments—food that has been studied, tinkered with, and includes freaky-sounding or difficult-to-pronounce ingredients; food that has extra chemicals and/or additives that some people have questions about. What are those extra chemicals? Why are they there? How does something as simple as chocolate syrup have more than three ingredients—cocoa, sugar, and a dash of deliciousness? I mean, really: what’s high-fructose corn syrup, and why the hell is it the first ingredient in my Hershey’s syrup?

High-fructose corn syrup is a sweetener made from corn. It is even sweeter than granulated or cane sugar, and it is everywhere—it’s in your Coke and Pepsi and Mountain Dew. It’s in your Capri Sun. It’s in your Froot Loops and jam and ketchup. It’s in so much of our food—even food that we don’t think should be sweet, like soft white bread.

As for why it’s there: well, like many things in our society, it mostly boils down to dolla dolla bills, y’all. I know this will come as a major shock, and I hope you’re sitting down for this, but most food companies tend not to be exactly super interested in our health and well-being so much as they are in making money. (Yes. I know. You’re stunned.) And one of the best ways to make money is to create a product that people not only crave, but that their desire for is almost insatiable—and to keep manufacturing costs as low as possible.

Enter high-fructose corn syrup (among many other ingredients), which is much cheaper than sugar. God knows I love me some Coke and cookies, but nutritionists have been down on the ingredient for years. While it is FDA approved, some studies have tried to establish a link between the syrup and some types of diabetes and heart disease, but the conclusions are often hotly contested. It probably won’t surprise you to learn that the Corn Refiners Association of America takes issue with such findings.

Once I dug in online, I realized that high-fructose corn syrup is just the tip of the chemically altered iceberg. I wanted to know more about some of the mystery ingredients I see on food packages every day. Now y’all, I’m not saying “DON’T EAT PROCESSED FOOD EVER” and I’m not saying “ALL FOOD MANUFACTURERS WANT YOU SICK AND UNHEALTHY,” but I do think it’s good to know a little bit about some of the ingredients we put in our mouths on the regular. So here we have a li’l list of some really common processed-food ingredients, what they’re used for, and what rumors surround them. Let’s be clear here: ALL of these ingredients have been cleared by the FDA, meaning they are all considered safe to eat, no matter how many syllables they have. (But let’s also remember that the FDA has approved some ingredients that are banned elsewhere.)

What it is: One of the most common dyes in food, used to make it more colorful, and therefore tastier-looking. It’s made from…petroleum. Delicious.
Found in: candy (M&Ms, Starburst), cereal (Lucky Charms, Reese’s Peanut Butter Puffs), drinks (Mountain Dew Code Red, some varieties of Hi-C), drugs (cherry-flavored NyQuil), and snacks (Nutri-Grain bars, Jell-O, Little Debbie Swiss Rolls).
Rumor mill: Scientific opinion is conflicted, but there are health advocates out there who worry that artificial dyes might be increasing hyperactivity and aggression in children who are sensitive to them. Yet another reason not to share your candy with your little brother.

What it is: A lightly sweet or almost flavorless food additive in the form of a powder. It’s made from rice, corn, wheat, or potatoes, and it’s used to thicken foods.
Found in: You name it. Sports drinks, salad dressings, soups, Splenda. It’s everywhere.
Rumor mill: Maltodextrin by itself is generally considered harmless, unless you are allergic, have celiac disease, or are gluten-intolerant (some maltodextrin is made from wheat).

What it is: An artificial sweetener used in “diet” foods to provide a sweet flavor with less calories. Fun fact: after aspartame is ingested, it breaks down into methanol and then formaldehyde.
Found in: diet soda, breath mints, gum, sugar substitutes like Equal and NutraSweet, and many products advertised as “sugar free”
Rumor mill: Aspartame courts a lot of controversy. It has a baaaad reputation. People have said it is responsible for maladies ranging from headaches to cancer, but scientific studies have not supported this claim. And as for the methanol/formaldehyde: this effect is not limited to foods with aspartame. Citrus fruits like oranges and grapefruits break down similarly.

What it is: a type of salt that can be quickly absorbed by the body
Found in: Gatorade, Powerade, and non-dairy creamer
Rumor mill: No one appears to object to this additive on health-related grounds. It’s a multisyllabic ingredient that just looks like it might be something weird.

What it is: a salty-tasting flavor enhancer
Found in: Many delicious snacks, like Doritos, Cheetos, and McDonald’s french fries. Almost everything at KFC has MSG in it. Certain flavors of Pringles, nearly all Campbell’s soups, Marmite, Lipton Instant soup mix.
Rumor mill: MSG is a hot-button issue—many people claim it gives them headaches and makes them dizzy. There is no definitive proof online that MSG is unsafe, but I can sure find online groups that think it’s the devil. Restaurateur David Chang has a LOT to say about what he believes is the defamation of MSG.

What it is: fats that have been cooked at a very high heat with added hydrogen. They’re used to extend shelf life in foods and be a cheaper replacement for butter and lard. These are what are known as “trans fats.”
Found in: margarine, cake mixes, Bisquick, fast food (french fries again), some TV dinners
Rumor mill: No rumors this time—excessive consumption of trans fats can lead to clogged arteries, heart disease, heart attacks, and strokes if consumed on a regular basis. Our bodies don’t know how to process trans fats. Trans fats lower good cholesterol and raise bad cholesterol, and everyone (science, the government, consumers) agrees on that. For once. That’s why nearly every tasty-looking product at the grocery store that doesn’t have any trans fats will LOUDLY advertise this fact. However! A little bit isn’t going to lead to all of these side effects, and most of us only get a little bit, thanks to so many companies completely doing away with the ingredient.

Food is fascinating. When I was digging around online, I started finding all kinds of weird facts about the stuff I eat every day. For instance:

My research led me into some strange territory. (I had no idea, for instance, what I was getting into when I dove into the world of aspartame.) There are a lot of worried people out there, many with legitimate health concerns and a few with ideas that border on conspiracy theories. Some are so against/freaked-out by additives and chemicals that they won’t touch anything that didn’t come out of their own garden with a 10-foot pole. And it is kind of scary that we don’t really know what we’re eating all the time, but personally, unless you have a serious or life-threatening allergy, I don’t think getting obsessed about it is the answer. There are some processed foods that make me really, really happy, and I think happiness-making is a valuable quality in food. I think the key here is moderation—y’know, we shouldn’t eat Oreos after each meal, but a handful after school once in a while? You’re gonna be fine. I don’t want to demonize all food that is not raw kale, but then, our health depends in large part on what we put in our mouths. Knowledge of food, nutrition, and ingredients gives you the power to make informed choices, and making informed choices is important…even if the only informed choice that I make when I see Cool Ranch Doritos is “GIMME.” ♦