The Gos gets freaked out. 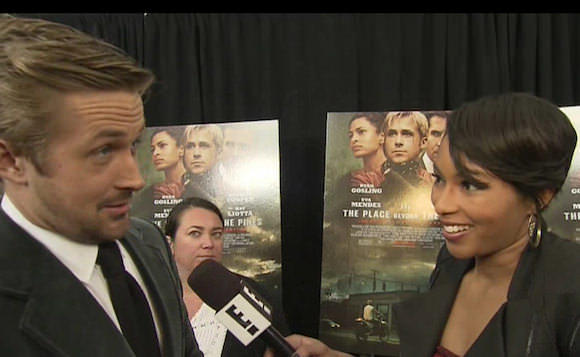 Last week Ryan Gosling dropped a bomb on planet Earth by subtly announcing he was taking a hiatus from acting. “I need a break from myself as much as I imagine the audience does,” Gosling said in an interview with the Associated Press. The idea of a world without Gos freaked people out so much that a British video-on-demand service created a special helpline (called the Gosline) for fans who were devastated by the news. (When you call the number, you hear a recording of Gosling’s lines from The Notebook, including “It’s not gonna be easy, it’s gonna be really hard.”) This Thursday at the New York premiere of the actor’s new movie, The Place Beyond The Pines, E! News correspondent Alicia Quarles asked the actor what he thought of the Gosline. After admitting he didn’t even know what it was, he said he was experiencing his own “feelings of freaked-outness.” 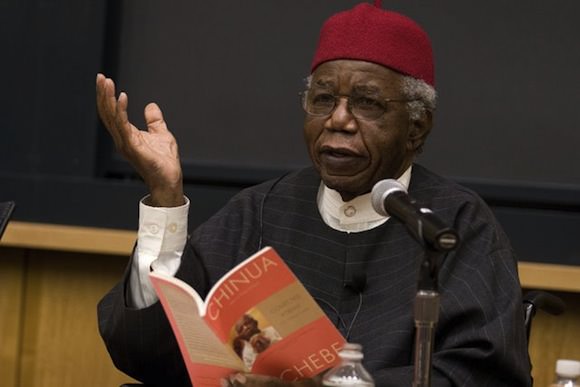 Chinua Achebe, author of novels like Things Fall Apart and Arrow of God, died last week at the age of 82. My pal Oroma put together a playlist of Igbo music in his honor. You should really just read the introduction she wrote on her site, but you can listen to it here.

Fresh Air also posted this excerpt from a 1988 interview with Achebe, in which he discusses the responsibility that comes with telling stories of oppression and struggle, as well as the significance.

This week saw the unveiling of the third and final installment of Wes Anderson and Roman Coppola’s series of commercials for the Prada fragrance Candy, starring Léa Seydoux. It features the kind of whimsy and care for cinematic detail that both directors are known for (cross-section sets, carefully considered color palettes, ’60s-inspired everything, etc.). Watch all three episodes back-to-back here and learn how to say “banana split” in French. (OK, apparently it’s just “banana split.”)

The graffiti artist/painter Jean-Michel Basquiat’s reported girlfriend* from the late ’70s and early ’80s, Alexis Adler, recently let the website Animal into her downtown Manhattan apartment. She shared the same space with Basquiat, who died when he was 27, more than 30 years ago. In this short video posted by Animal on Thursday, Adler shows off incredible, never-before-seen photos of Basquiat and some of his “lost” artwork, including a gold trench coat of hers that he streaked with paint while she was sleeping (“It added to its beauty,” she says while she models it). It’s another reminder that Basquiat was one of America’s great painters. And today, Adler helps supervise New York University’s embryology laboratory, which is badass in and of itself. 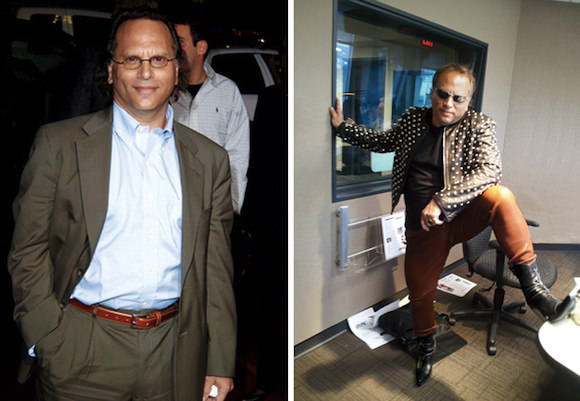 Buzz Bissinger, before (left) and after the worst of his shopping addiction.

Buzz “H.G.” Bissinger is the author of Friday Night Lights, the best-selling book that later spawned a movie and one of the greatest television series ever—not to mention, thank goodness, the career of Taylor Kitsch (aka Tim Riggins). Until April’s GQ dropped, almost no one knew Bissinger also was an EXTREME SHOPPING ADDICT. In a lengthy confessional posted this week to the magazine’s website, he admits that in the years between 2010 and 2012 ALONE he spent more than half a million dollars on clothing. He describes a need to wear Gucci, which not only landed him in the front row of its show at Milan fashion week, but also in shopping rehab. High fashion practically broke the guy’s spirit, and eventually Bissinger had to come to grips with what was fueling his addiction. It’s a tragic tale of conspicuous consumption and rich-person privilege. It’s also one of the most fascinating, craziest stories I’ve read in years and offers up an alternate-universe version of YOLO: “FROW” (fashion front-row).

Did you know there’s a whole bunch of theories about possible deeper meanings behind Stanley Kubrick’s The Shining? A documentary released this week called Room 237 (after the scary haunted room in the movie’s fictional Overlook Hotel) explores these hypotheses and the people who came up with them. Some of the theorists believe Kubrick meant the 1980 movie to be an allegory for Native American genocide, some imagine it’s a metaphor for the Holocaust, and others think it was Kubrick’s own long apology for allegedly helping the government fake the Apollo 11 moon landing. Room 237’s director, Rodney Ascher, told the site Slashfilm that the ideas behind the documentary were “puzzles” even to him “until they came together” in the movie. What does it all mean?! I can’t WAIT to find out.

A panel from a graphic novel by My Chemical Romance’s Gerard Way.

Retired mall-goths, scene kids, and marginally punk musical-theater geeks around the world are mourning (more than usual) this week thanks to the recently announced permanent hiatus of My Chemical Romance. On Monday, front man Gerard Way issued a heartfelt goodbye on TwitLonger. “My Chemical Romance is done. But it can never die…. Because it is not a band—it is an idea.” And the idea does seem to be living on. According to Vulture, Way is set to release a graphic novel (co-authored by Gabriel Bá) called The Umbrella Academy: Apocalypse Suite, which NME says is based on MCR’s last album, Danger Days: The True Lives of the Fabulous Killjoys. The MCRmy (of which I am a member) may have preferred a proper farewell tour (fans even started a petition for one!), but, even without one, it’s not the end of the world. To borrow some of Way’s own words: You really need to listen to me because I’m telling you the truth. We will be OK. TRUST ME. 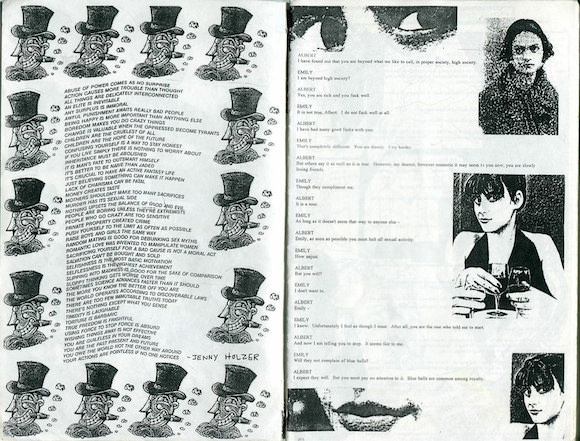 Sheila Heti’s novel How Should a Person Be? was one of my favorite books of last year, and her voice—the way she blends her own experiences into fiction to make sense of the world as she sees it—is the one I’m most excited about in contemporary Canadian literature. So imagine how excited I was Tuesday when Flavorwire posted pages of a feminist zine Heti made in the ’90s. Heti writes, “We need…to promote the art created by young girls. I want it to prove that the shit published in teen magazines and the sappy stories that win high school English contests are not the best we have to offer.” ♦