A video game about a teenage feminist, plus more things you always wished existed.

Gone Home, a “story exploration” video game for PCs coming out later this year, is just too cool not to share with y’all! The game, set in 1995, moves through the house of teenage riot grrrl Sam Greenbriar and her family, who have all mysteriously disappeared. Sam’s story unfolds through art, zines, and music, which is cool enough on its own, but this week the gamer blog Joystiq announced that Gone Home’s soundtrack will feature original music by the pioneering riot grrrl bands Heavens to Betsy and Bratmobile. I can’t wait for the release!

And in other sort-of music news: A David Bowie-themed café opened in Japan. 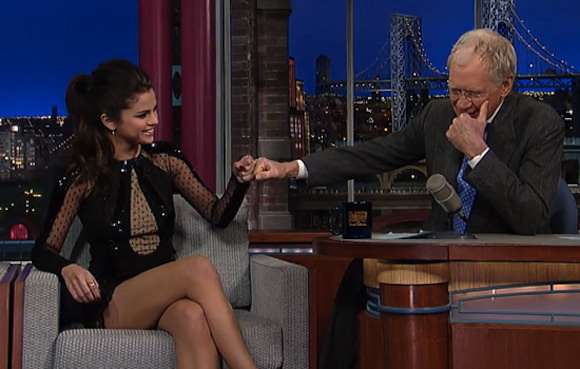 I’ve yet to see Spring Breakers, but I feel like there’s already enough press about it to make up an entire semester’s curriculum for a college course called something like “Deconstructing Shots of Neon Boobs.” Here is a Huffington Post link, which will bring you to a ton of other Spring Breakers-related links. Here is a piece from Slate about how the movie treats its black characters. And here is a video of Spring Breakers star Selena Gomez dissing Justin Bieber on Letterman. OMG, SHE’S SO SASSY AND SMART. I love JB, but I like to imagine their relationship had a kind of Tracy Jordan/Liz Lemon dynamic, with her having to continually remind him what it means to be polite and tactful and stuff, and him asking for snacks and trying to get secret boob action mid-hug.

Nicki Minaj interviews herself in this amazing video for Elle. She gets the “dance_blessed” girl down PERFECTLY.

Chag sameach, fellow Jews! Here is the story of Passover in Rugrats form, courtesy of Buzzfeed. 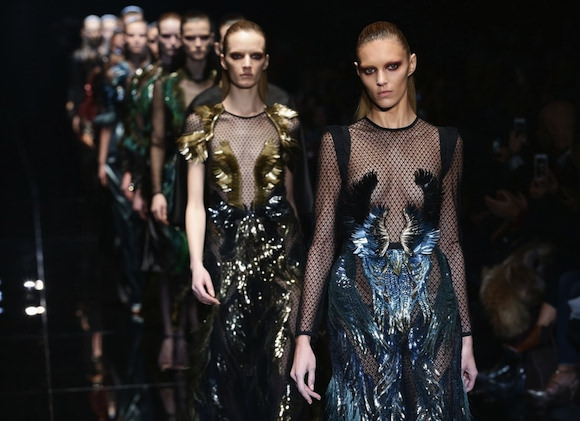 Pointing out the continued and obvious omission of women of color on fashion runways is a pretty infuriating thing to have to do in 2013, when a lot of people act like we’ve solved the problem of racism forever, yay! One glance at any fashion magazine will tell you that women of color are still underrepresented in advertisements and features. Non-white models were almost completely missing from the fall 2013 runway shows that happened over the past couple months, and this week Buzzfeed posted statements from a few of fashion’s top casting directors about why that was the case. Sure, a collection is the designer’s vision, but a huge team—casting directors included—generally executes that vision. I’m mostly disappointed with their responses, particularly the way so many of them referred to race as “trendy” (gross). Some of the casting directors did stump for diversity, including James Scully, who selects models for designers including Stella McCartney, Lanvin, and Jason Wu. “A mix of diversity makes the show and clothes more interesting,” he said—then sort of left it at that. Contrary to popular belief, diversity doesn’t happen because you want it to, but because you actively work to make it happen. Surely the fashion industry can do better.

Last Sunday’s verdict in the Steubenville, Ohio case—in which two teenage boys were found guilty of raping a 16-year-old girl who was unconscious—has given rise to a lot of voices as people try to work through their feelings, most of which are some form of anger. Anger at media outlets that focused on and showed compassion for the rapists and not the victim. Anger at Steubenville’s residents, many of whom turned on the victim when she implicated two of their high-school sports stars. Anger that we live in a culture that can refuse to take rape victims seriously or actively work to prevent rape from happening in the first place. Roxane Gay, a writer and all-around marvel, used empathy to frame the Steubenville case and the reactions to it in this intelligent and thoughtful essay. It reminded me that empathy is sometimes tricky, and that my role in a movement for progressive change is not always easy. 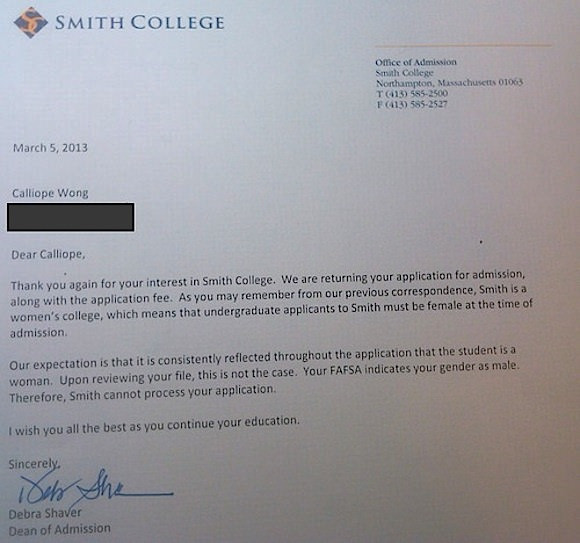 The letter Calliope Wong received this month from Smith College.

Calliope Wong, a friend from my Connecticut high school, is applying to colleges and universities. She fell in love with Smith College, an all-girls school in Massachusetts, and applied—only to have Smith return her application. Twice. Why, you might ask? Well, Calliope is male-to-female trans*. Smith wouldn’t consider her as a prospective student because her application for federal student aid says she’s male, which is a label that’s unlikely to change unless she undergoes sex-reassignment surgery. After Smith returned her application the first time, Calliope rallied the school to accept students like her on her Tumblr, (wisely) explaining that being required to undergo genital surgery in one’s late teens is “unreasonable and not modeled on the real life struggles of transwomen.” Her application to the school was returned a second time earlier this month, but she hasn’t given up yet. This week she vowed to keep pressuring Smith, for her own admission and “for the transwomen to come, who should inherit a better and more just system.” 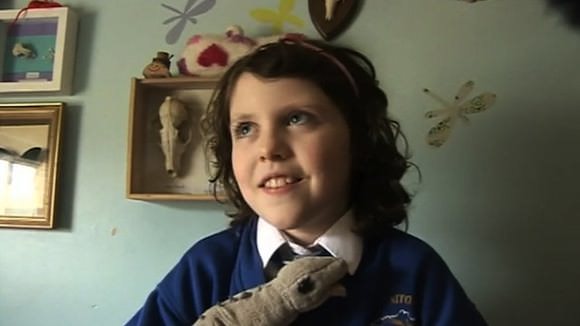 Four years ago, fossil enthusiast Daisy Morris, then four years old, saw what she believed was a dinosaur bone on the beach near her home in England. This week, the whole world learned she was right all along when a scientific paper officially announced her discovery of an approximately 125-million-year-old species of flying reptile. To honor her contribution to paleontology, scientists named the dinosaur Vectidraco daisymorrisae. In a video clip from the BBC, a grown-man fossil hunter admits he’s “a little bit jealous because it should’ve been [him] that found it,” and the presenter says Daisy was “in the right place at the right time.” But Daisy’s mom says Daisy had been fossil hunting since she was three, and that was exactly what she was doing the day she found a fossil. That doesn’t sound like a coincidence at all. ♦