A tribute to Special Agent Dale Cooper, in dessert form.

In the second episode of Twin Peaks, when Special Agent Dale Cooper talks to his boss on the phone and waxes poetic about the Lamplighter Inn because “they’ve got a cherry pie there that’ll kill ya.” I watched that show without prior knowledge of the plot (the best way to watch it, imo), and I honestly believed that line was a clue—that someone had poisoned Laura Palmer via cherry pie. I became obsessed with every reference to cherry pie on the show. It turns out I was totally wrong and the good people of Twin Peaks, Washington, just take dessert very seriously (as they SHOULD). There is nary an episode where someone isn’t chowing down on a slice of pie or a stack of doughnuts.

As a tribute to Dale Cooper, I’ve created the perfect hybrid snack: the cherry pie doughnut. Yes, this is really “just” a doughnut-shaped pie, but on the other hand, you guys, this is totally a DOUGHNUT-SHAPED PIE! These would be great to serve during a Twin Peaks viewing party or whenever you need a sugar jolt, like when you’re solving murders for the FBI. 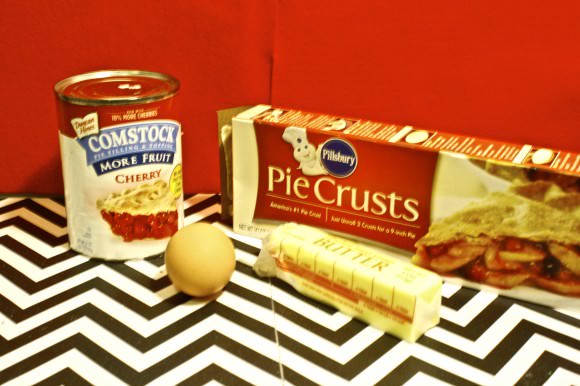 Ingredients:
• 1 can of cherry pie filling
• 2 packages of refrigerated pie crusts (Each package should have 2 rolled-up crusts. Find ’em near the cookie dough.)
• 1 egg
• Butter or cooking spray (for greasing your pan)
• Optional: granulated sugar

Equipment:
• A doughnut pan (or a muffin pan + some aluminum foil)
• A baking sheet
• A round cookie cutter (or a drinking glass) whose circumference (at the rim, for the glass) is larger than the cups in your muffin/doughnut pan
• A small bowl
• A spoon and a knife
• A whisk (or a fork)

How to make them:

2. If you have a doughnut pan, like this one, grease that with your butter or cooking spray. If not, grease a muffin/cupcake pan.

I don’t have a doughnut pan, so I improvised using aluminum foil, which I’m about to show you how to do. If you are lucky enough to own a special pan JUST for all the doughnuts you are making and eating all the time, Dale Cooper and I salute you, and you can ignore all the tinfoil parts of these instructions.

3. Non-doughnut-pan havers: Rip off a piece of foil about 5 inches long and smush it into a cute little ball. 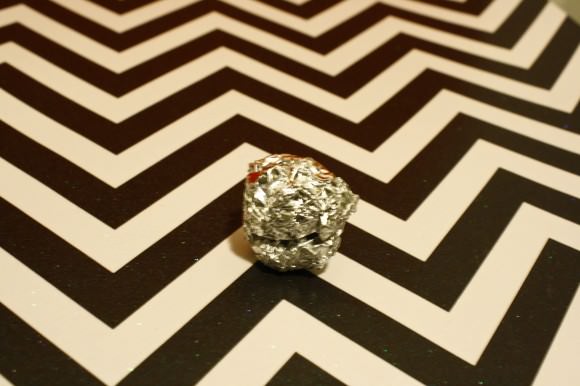 4. Repeat to make enough balls to fill your muffin tin—one per cup. Grease them with butter or cooking spray, like you did to the pan. 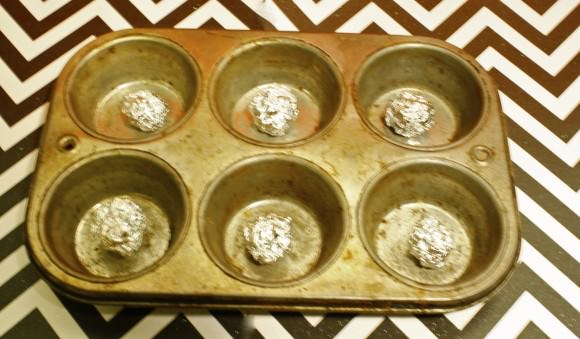 5. Unroll one of the pie crusts onto a flat surface. Using your glass or cookie cutter, cut out circles from the crust. 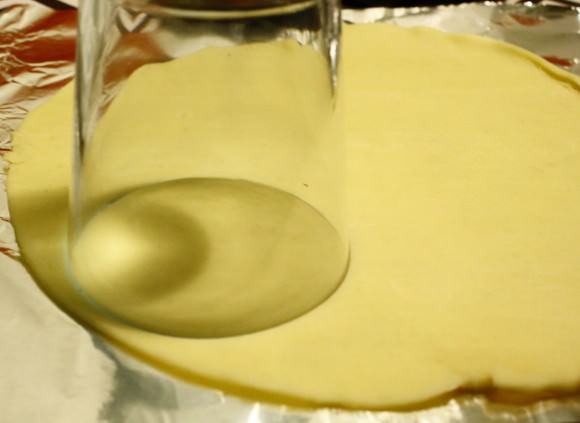 (The circles have to be a good half-inch larger, all around, than the cups in your muffin/doughnut tin, so there’ll be enough dough to go up the sides of the cups. If you don’t have a glass or cookie cutter big enough, you can just cut out adorably imperfect (call them “rustic”) circles with a knife.)

6. Repeat with all 4 pie crusts. You should get six circles from each one. 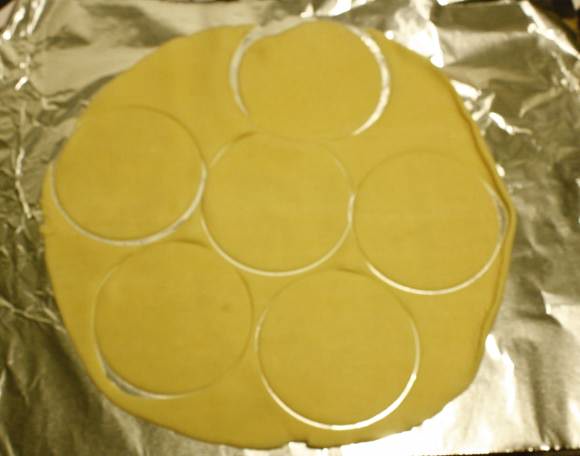 7. Place one of your aluminum-foil balls in the center of a dough circle. 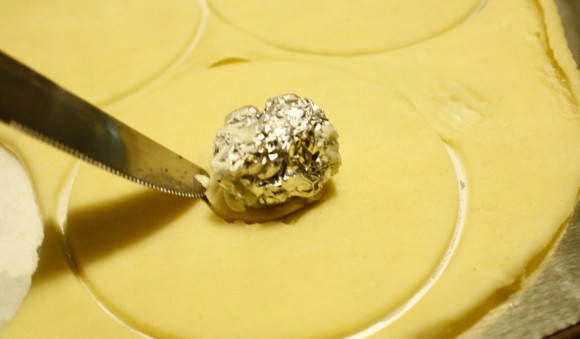 Cut around it, so your dough takes on that familiar doughnut shape. 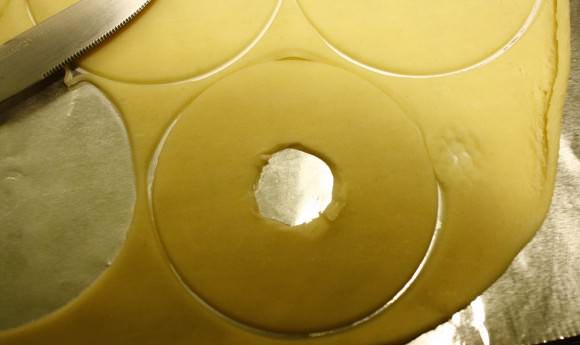 8. Take half of these dough circles you’ve made and press them into your tins, WITH the foil balls in the center. 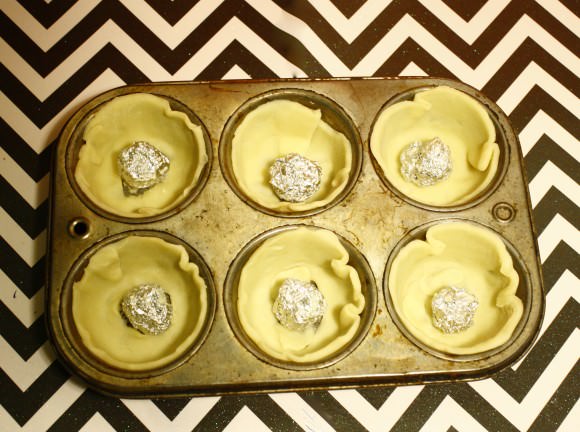 9. Spoon some pie filling into each little dough cup—enough to fill each one about halfway. 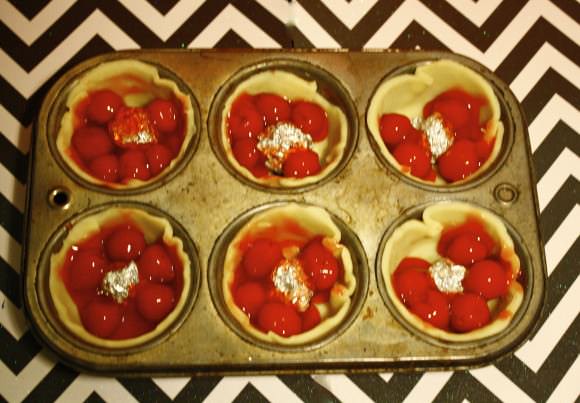 10. Top the pies with the remaining dough circles. You should see the foil balls through the little porthole in these top crusts. 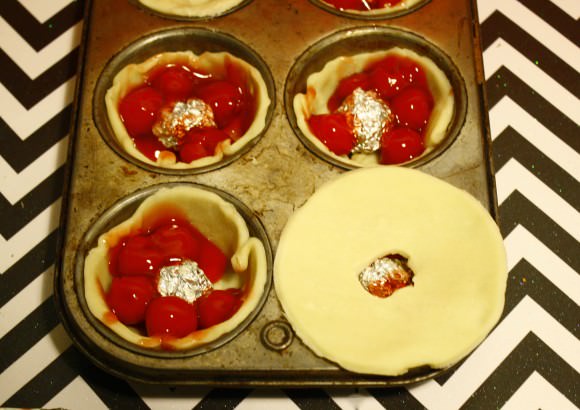 11. Use your fingers to crimp the top crust and the bottom crust together at the edges. 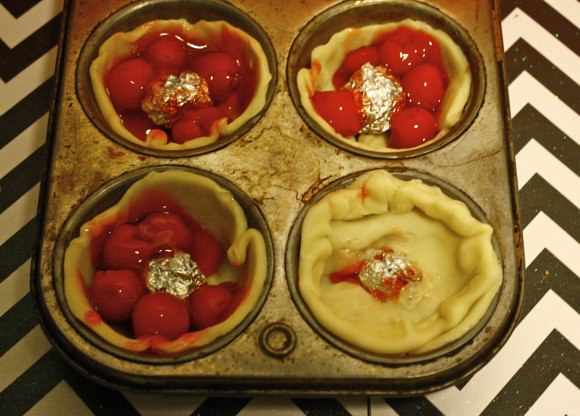 12. Now I’m going to ask you to do something which may upset these snuggly baby doughnut pies you’ve created: reach into each one and rip out its heart, by which I mean the foil ball in its center. Don’t worry; you’re gonna put it back. 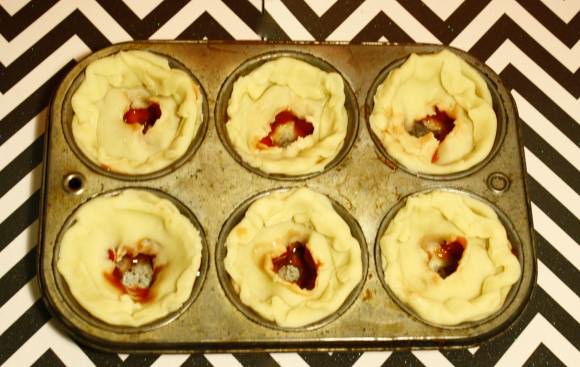 13. You will have some excess dough left over from steps 5–7. Use bits of this dough to build walls around your doughnut holes, connecting the top and bottom crusts in the center. 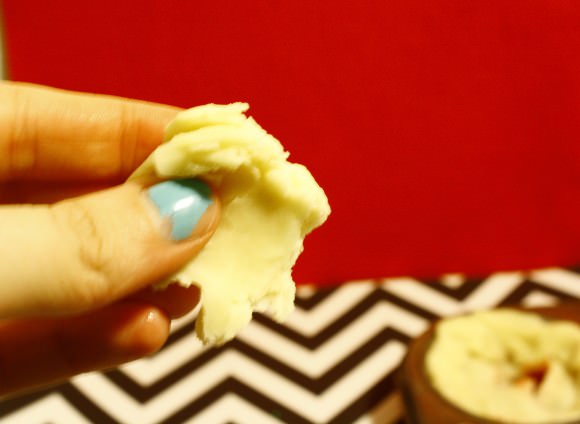 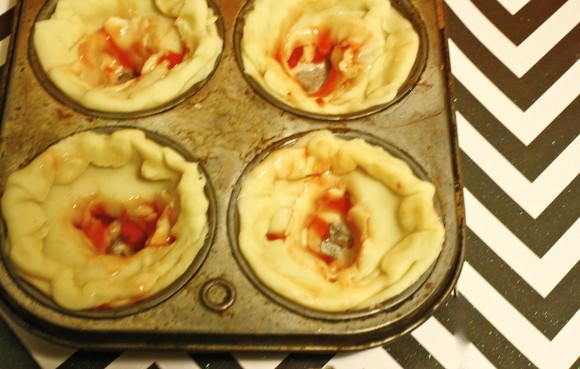 Be sure to seal the edges together all around, top and bottom, to keep these mini-pies in a doughnut shape and to prevent the filling from leaking out and splattering all over your oven.

14. Crack your egg in a bowl and whisk it. Now, many learned pastry chefs will scoff at my methods, but since we’re all just lazy teens here who don’t own pastry brushes and other luxurious cooking tools, I advise you to dip a finger or two in the egg and rub it over the top crust of each pie/doughnut. This makes it so when they come out of the oven they’ll be all glossy-looking and pretty. 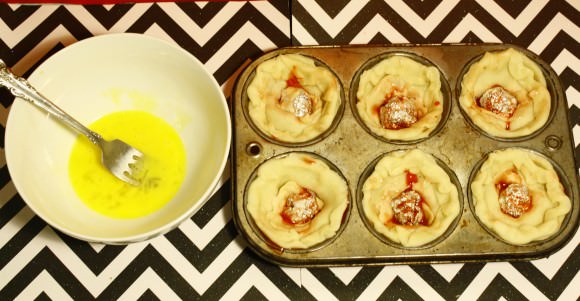 15. OPTIONAL BONUS STEP: For an extra-shiny, crunchy, sweet top crust, sprinkle some sugar on top of your pie doughnuts.

16. Place your tins on a baking sheet and bake for 12–15 minutes, until slightly golden.

17. After they’ve cooled, remove the foil balls from the centers. 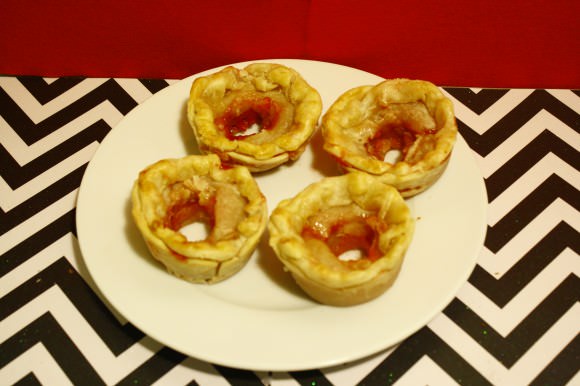