From Here to Violet Stardust

David Lynch’s movies are weird, surreal, dark, creepy, nightmare-inducing, haunting, and beautiful. He’s the kind of director who creates scenes so wonderfully disturbing, they will bury themselves in your mind and stay there, sometimes for years (in my personal experience). Luckily, some of those unforgettable images are of cool lady characters with great LEWKS (like Perdita Durango, whom you will meet below). If you haven’t already, watch these films, take notes, and good luck trying to figure out some of the mysteries that have had me WTF-ing over the years. 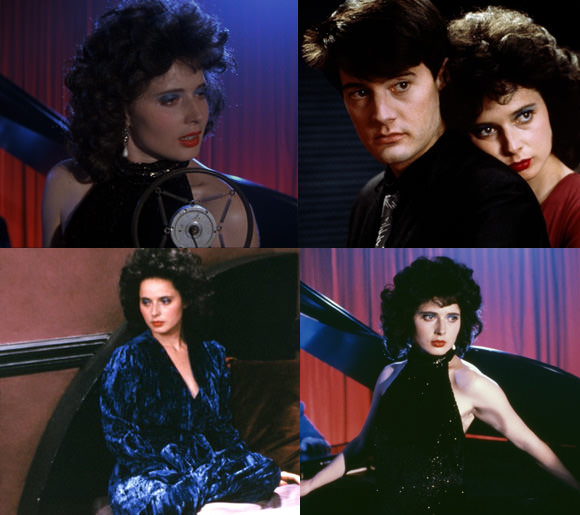 In Blue Velvet (1986), a college dude named Jeffrey Beaumont (Kyle MacLachlan) finds a severed human ear while taking a walk in his quiet hometown (guh-ross). Curious, he decides to investigate with the help of a detective’s daughter named Sandy (Laura Dern). He ends up discovering a twisted and seedy underworld that includes oddball characters like tortured lounge singer Dorothy Vallens (Isabella Rossellini) and drug-huffing pervert Frank Booth (Dennis Hopper). Jeffrey is quickly seduced by Dorothy, and why wouldn’t he be? Look at this lady’s style: long sparkly gowns for crooning some tunes, dewdrop-pearl earrings, bright-blue eye shadow, and, of course, a blue velvet robe. One like hers would be the perfect thrift store score, but this dress from Chicwish is the next best thing. 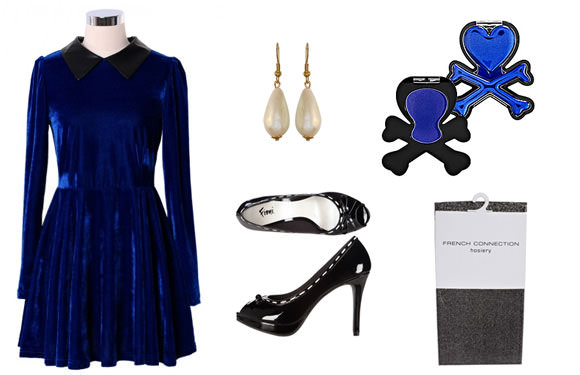 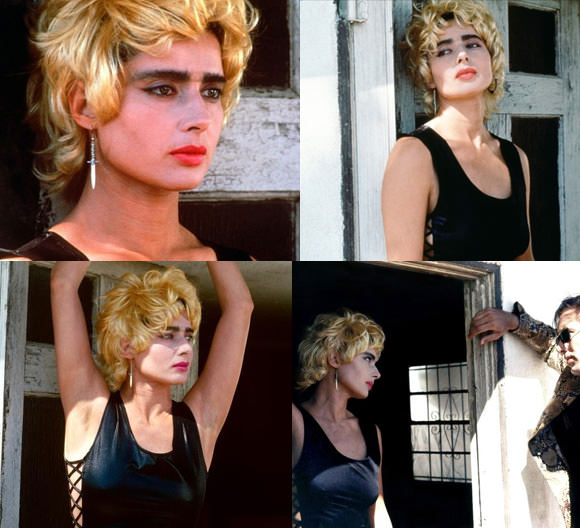 Wild at Heart (1990) introduces us to fresh-out-of-jail Sailor (Nicolas Cage) and his boo, Lula (Laura Dern), who become lovers on the lam when Lula’s mean mama puts a hit out on Sailor. As we know, I LOVES me some lovers-on-the-run movies, and this one is no exception. Plus, it has my all-time favorite Lynch character, Perdita Durango (once again, Isabella Rossellini). Perdita is an old acquaintance of Sailor’s and a truly badass femme fatale. She reminds me of old-school Madonna: bleached-blonde hair with dark roots, thick brows, and all-black clothing. What a dream babe! A sexy dress like this one from ASOS and suspender tights (which are totally my jam lately, FYI) are perf for vibing Perdita. Don’t forget to mismatch your earrings like she does! 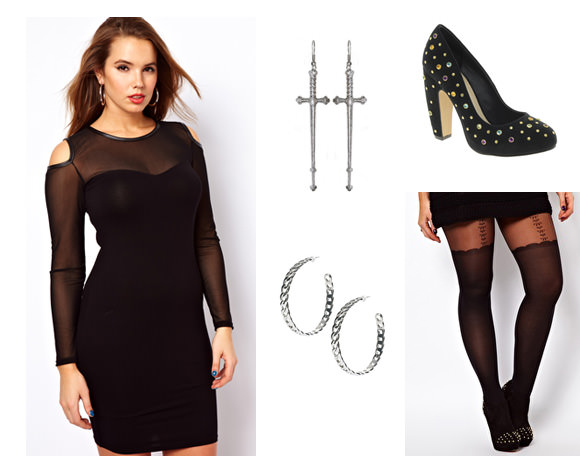 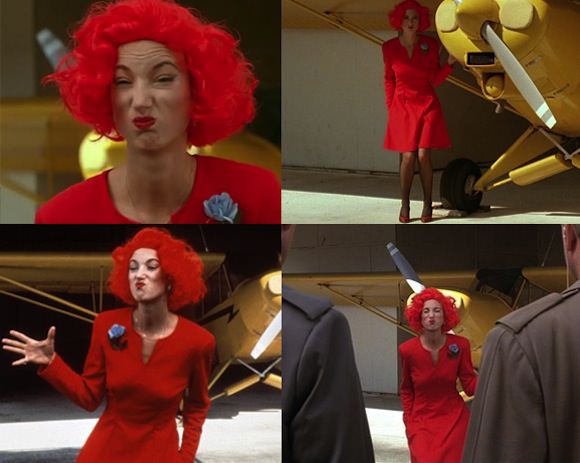 Twin Peaks: Fire Walk With Me (1992), the prequel to the beloved cult series, opens with two detectives receiving comedic clues about a murder from a brightly dressed woman named Lil. Lil makes strange faces while doing interpretive dance, which serves as a code for the men to decipher. While you might wanna take fashion cues from more-prominent characters like the infamous and doomed Laura Palmer, I personally love Lil’s style. I mean, LOOK AT ALL THAT RED! It is literally head to toe. The detectives figured out most of Lil’s messages, but the significance of the blue rose remains a mystery. The best part of her look is definitely that ’do, so if you’re feeling like having a “red period,” pick up some of this Manic Panic hair dye and get to bizznass. 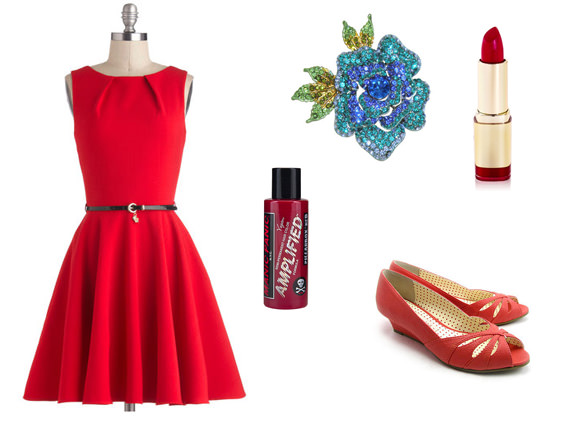 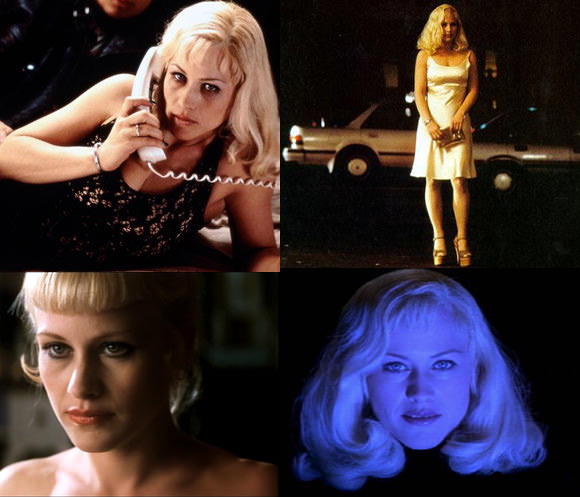 Lost Highway (1997) is an unusual tale—does that even need to be said?—about Fred Madison (Bill Pullman), a saxophonist accused of his wife’s murder. After being thrown in jail, he mysteriously transforms into mechanic Pete Dayton (Balthazar Getty). When police discover Pete and not Fred in the cell, Pete is released and gets caught up with some shady characters, including a gangster named Mr. Eddy and his mistress, Alice (Patricia Arquette, who also plays the aforementioned dead wife). I love Alice’s simple white dress and her big, chunky, totally ’90s platforms. I’m obsessed with Topshop’s platforms, but these ones from Urban Outfitters are pretty cute and a total bargain. 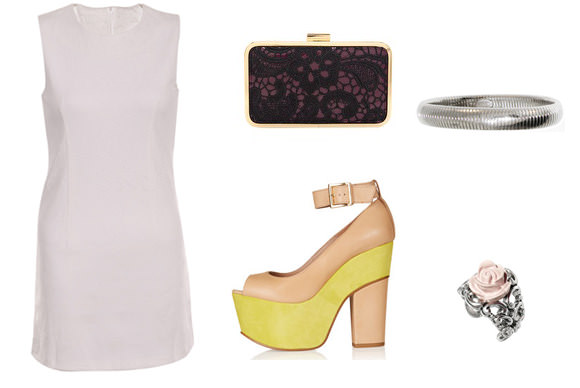 Once you’ve got the wardrobe, you can look for a weird, unsolvable mystery of your own to go with it. Although, according to the laws of Lynch’s universe, it might find you first. ♦