Mystery Club: The Case of the Stolen Kiss 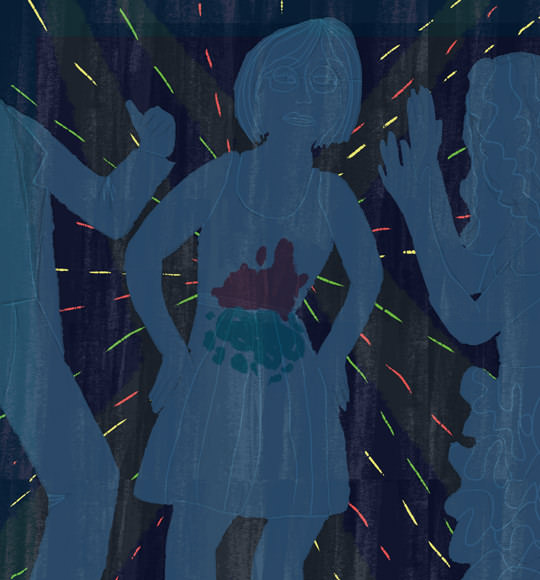 You can read part one of this story here.

Benny stood in the darkness, stunned. Did that just happen? he wondered. He couldn’t be completely certain; he’d never been kissed before, so he had nothing to compare it to. But he was pretty damn sure someone had just kissed him. There had been lips on his lips. That’s what kissing is. Oh my god.

It a took a while for Benny to realize how loud it suddenly was. Everyone was yelling. There was the sound of something crashing, like a table or a bunch of chairs. Benny snapped to attention. What was going on? Why had the lights turned off? How many minutes had passed? Benny cursed himself. How could he have lapsed into such a daze? Vigilance was the most crucial tenet of Mystery Club, but thanks to that kiss he’d been standing there like an idiot, oblivious and absorbing nothing.

He quickly tuned in to the chaos around him. There was another crash, followed by a trill of girls’ laughter. Mr. Gadhavi was shouting, “Nobody move! Everyone stay where you are!”

Then, just as suddenly as they’d gone out, the lights came back on.

Fitting in
no one does it better
than YOU, dancers
you dancers on drugs
I only fit in
when I’m surrounded by shadows
I am one of them.

—a poem by Calvin Harker

Calvin Harker wasn’t there to dance. He was there to write poetry. He found watching other people dancing very inspiring, and tonight was better than usual, because half the student body was on drugs. Everyone was in their own little world: spinning, whirling, freed from their usual urges to conform. It made great material.

Calvin stood in the corner of the gym, listening to a group of students gossiping nearby. Apparently, someone had called the police about a drug dealer in the girls’ bathroom. They weren’t shutting down the dance, thankfully, but they were blocking all the exits so they could search people on the way out. Everyone was whispering about who the narc could be.

“I think it was that priss Constance Bouchelle,” someone was saying.

“It was probably Scooby-Doo,” said Cam Davis, the beefiest dude in school.

Calvin knew he was talking about Benny Flax. Benny was the founder and president of the Riverside Mystery Club, which was generally thought to be the dorkiest club in school. But while Benny may have been a dork, Calvin knew he wasn’t a narc. Benny believed in justice and honor, not tattling. In fact, Benny would be the last person to call the police. If the guy had one flaw, it was that he had too much pride. He liked to do things himself, his own way. He’d never involve authorities if he could help it.

Calvin considered stepping in to defend Benny, but decided not to. Safer to keep in the shadows.

Virginia didn’t have to look—she knew the dress was ruined. It was bad enough that Skylar Jones had spilled punch on her, but now she was pretty sure she’d fallen into an entire cake while the lights were out. Oh well, at least I’ll stand out now, she thought. Virginia loved standing out, something that had proved impossible at this stupid dance. Someone had declared it Opposite Day, and people were taking it weirdly seriously, wearing clothes inside-out, fast-dancing to slow songs and vice versa, and basically doing everything as bizarrely as possible. How could a girl distinguish herself amid such chaos? Not that Virginia cared anymore. Something way more interesting was happening now.

“Benny!” she shouted. He didn’t seem to hear her. He was staring down at the ticket table, overly interested in a smear of cake frosting.

Benny looked up suddenly, taking her in. “Did you just…” His voice trailed off.

Benny looked from the frosting on the table to the mess on Virginia’s dress.

“Why are you gaping at me like that?” Virginia asked. “Did someone hit you over the head?”

“Someone kissed me,” Benny said. He hadn’t meant to say it, it just came out. Benny didn’t have much practice being secretive. As Mystery Club president, it was his task to unravel the secrets of others, not to possess them himself.

“Someone WHAT?” Virginia yelled. Then she burst out laughing, like this was the most hysterical event to occur in history.

Benny clenched his jaw. Virginia’s inappropriate laughter was one of her more irritating qualities. His eyes flickered again from the cake smear to her ruined dress. And this time, she noticed.

Thankfully, Benny was spared having to answer. At that moment, the ancient principal stepped timidly to the stage and began stammering into the too-loud microphone. “Just a little mishap with the power connection. Everyone proceed as normal. Dance as normal. Proceed with the evening of dancing.”

“Cotton-Eye Joe” blared from the speakers, and everyone groaned. But within about a minute, people were milling around the dance floor again. A pair of janitors placed WET FLOOR signs around the crashed refreshment table. Everything was returning to normal.

“Well this is anticlimactic,” Virginia said. Shouldn’t there be an unconscious body somewhere? Or someone shouting that their precious ruby necklace had been stolen? Virginia looked around and sighed. “I guess it was just a power outage. Or somebody’s plot to sexually assault you.”

“I wouldn’t call it an assault…” Benny said.

So it was a good kiss, Virginia thought, wondering if she should have taken credit for it after all.