My father is going to drink himself to death, and I just have to live with it. 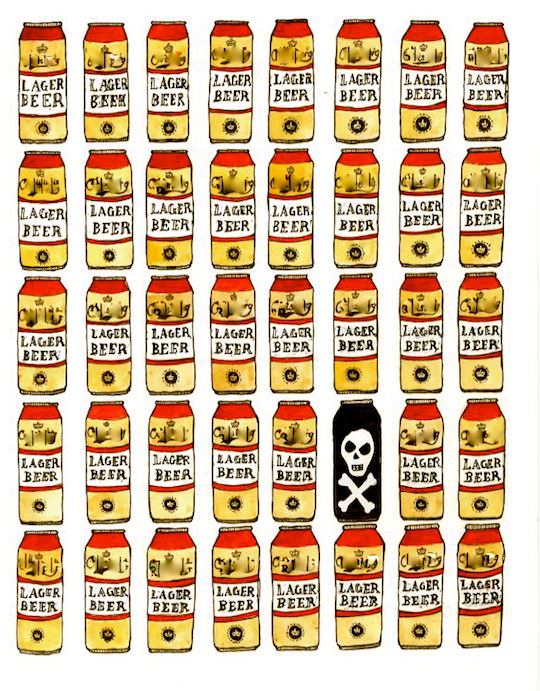 My father is an alcoholic. And for almost 20 years, as far as I was concerned, that was no problem. It was just another thing about him: he loved the Beatles and racing cars and drinking constantly. He drank Pastis on vacation in France, vodka whenever he had money, and golden cans of lager at all other times.

After my brother was born, it was decided that my mother would go back to work while my dad stayed home with us, mainly because he had forgone any kind of a career over the previous decade in order to play guitar in bands with his brother. He would spend his days cooking tomato sauce, cleaning the house, and downing cheap wine from cartons that he had stored on high shelves, out of our reach. I always understood that Stoffer—which is what everyone calls him, and which he likes to be called, so I will do so here—was an alcoholic, but the word meant very little to me. His drinking was completely out in the open; he was honest about it to the extent that he’d sip from what he called “a traveler” (basically a mini bottle) every morning on the walk to school. “Ahhh,” he’d say to us, jokingly, “breakfast of champions!” It didn’t bother me, because it didn’t seem to infringe on our relationship. He was always there to pick us up from school and correct our homework and play catch in the park with a cigarette behind his ear and an open container by his side.

It dawned on me years later that his drinking had been a huge factor in my parents’ divorce, which happened when I was six, but even that had barely changed anything: my parents moved to apartments on the same street in West London, so the four of us were often together. Stoffer still came over to walk us to school every day, far beyond the point of necessity. Once I was older, he’d hold my uniform blazer under his arm while I had a quick cigarette before class. Then he’d kiss me on both cheeks and say, “Do the right thing today, OK?” He never appeared drunk—to this day, I’ve seen him tipsy maybe three or four times.

Then, a few years ago, everything changed. I was 19, returning home from a summer abroad to find him standing at the gate looking pin-thin and noticeably shrunken. He told me he had a doctor’s appointment booked for that very afternoon. That appointment turned into a referral to a specialist, who promptly sent us straight to the hospital. We found out that Stoffer had cirrhosis, a liver disease that causes scarring of the organ tissue and can be fatal if not treated. He was only 57, but he looked more like 75. His rickety limbs were covered in lesions where his skin had become dry and irritated. The doctor said that if Stoffer quit drinking immediately, he had a chance of recovering; if not, he would suffer complete liver failure or any of a number of equally serious complications within two or three years. I immediately burst into tears. Stoffer, on the other hand, was entirely unperturbed. “Thank you, doctor,” he said, standing up. “But I’m a rock & roll musician, I’ve been drinking and smoking since I was 10, and I’m just about having a ball.” It was the answer I would’ve expected from him, but I freaked out. I felt like my eyes had snapped open to an evil I couldn’t believe I’d never noticed before.

When I was 15, my mother coaxed my brother and me into spending an afternoon at Alateen, an offshoot of Al-Anon, which is a support network for people whose lives have been affected by someone with a drinking problem. My mum wanted to make sure we hadn’t developed any deep-seated issues as a result of Stoffer’s alcoholism. The meeting was interesting, and the people were nice, but I was sure it wasn’t for us—then I noticed my brother sobbing as we left. I asked him what was wrong, whether he’d wanted to talk more about Stoffer. “No,” he said, wiping his eyes. “It just upsets me, listening to those stories. I feel bad for those kids—it must be awful. Dad isn’t like that at all.”

At the time, I felt almost proud that this was true. But after I found out what he’d done to his liver, and after I’d heard him proclaim that he had no intention of changing his behavior, things started to look different. I reconsidered things from my childhood that I had previously glossed over. Stoffer made it clear to us when we were little that childcare bored him “to tears,” and while he was essentially a loving and devoted father, he was also irritable and moody. Despite his laxity on things like watching TV and brushing our teeth, he would spank us when we misbehaved, and he would occasionally lose his temper over what seemed like trivial matters. I started modeling when I was 12, and I remember once talking about a photo shoot that my friend had just done. Stoffer didn’t approve of my modeling—he thought it was “banal”—but he suddenly got nasty and laid into me for not booking as many jobs as my friend had: “You’d better raise your game, Esmerelda, or you’re going to go nowhere.” (He doesn’t remember this.) I chalked that up to Stoffer being a jerk rather than a drunk, but now I wondered if his drinking had altered his perception of reality, as well as my own.

More frustrating was his attitude: he’d been given another chance and the time for action was now, but he seemed to have no interest in taking any. I boiled with anger. I was angry at my father’s parents for having allowed him to get away with a lifetime of drinking; I was angry at my mother for having married him in the first place; I was angry at myself for not having noticed his illness sooner. But mostly I was angry at him. He and I were close. When I hit my teens, I suddenly shied away from my mother, especially when it came to discussing personal stuff—I felt like we no longer understood each other. She always seemed disappointed in my grades or my hair or the short skirts I wore to school. In the meantime, Stoffer and I developed a genuine rapport that I didn’t have with anybody else. My brother, my father, and I became a sort of gang, and Stoffer transitioned from parental figure to something like an older brother. We’d sit around his house, listening to Jimi Hendrix records, and I talked to him about things I never discussed with my mother: boys, sex, periods, drugs, dreams, nightmares. My friends adored him, and whenever they came over he would hang out with us, smoking pot and giving my girlfriends advice on how to handle their latest crushes. “The lying little bastard!” he’d interject during the telling of a boyfriend scandal. Or: “He should be so lucky!”