Just the Two of Us

An early Mother’s Day card from the only child of a single mom. 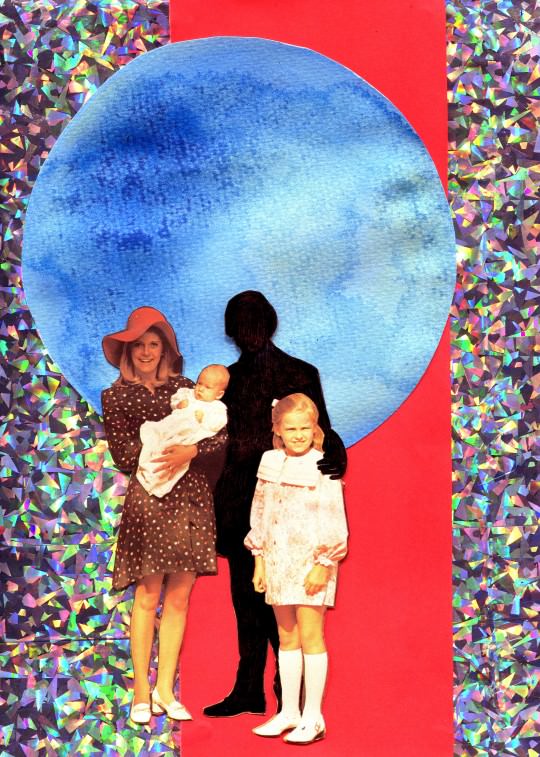 It wasn’t my mom’s vision of what she wanted for my childhood, watching big chunks of my family life break off and melt into nothing. But these things happen. Over the course of three years, starting when I was 12, my parents separated, rejoined, lost money, and finally divorced.

My dad moved out. I never wanted to live at his house so I didn’t. I saw him once a week for dinner, but my mom was the one who raised me through high school and into college. She and I stayed in our old house, which she was now solely responsible for maintaining. She was also suddenly 100% in charge of feeding, clothing, and watching over me, her only child. This was all happening as I was becoming an official teenager—a defining moment in almost any mother-daughter relationship, but the departure of our family’s third member meant no one could act as a buffer and a foil to offset any intensity between me and Janet.

It’s been noted that by the time they split up my parents’ relationship was long past its expiration date: They were trying to make it work for my sake, because that’s what “good parents” in a “good family” do. My mother still expresses regret that that she wasn’t able to provide me with the family she’d pictured for all of us nor the feeling of stability that she imagines would have come with it. To her, family meant a “warm house” in a “nice neighborhood” with a mom and a dad. What we ended up with instead is a two-person team: a single mother and her only child.

“I had a tough time letting go of the dream of home, safety, and family,” my mom said when I talked to her about all this stuff again for this article. “For so long, I walled myself off from the harsh realities. Then, as a cockeyed optimist, I held out the hope for redemption. I thought it would be better for you if I held the family together. It was unspeakably tough to face facts, move forward and take care of us.”

When I hear her talk like this now, it hits me how hard it must have been for her to simultaneously mourn her failed marriage and her vision of the “perfect family,” get her shit together to take care of the two of us, and deal with my anxiety as all these tumultuous changes were happening in my life. The dissolution of my parents’ marriage was one thing, but I accepted it and moved on quickly. My dad was always more of a hardass, so there were ways in which their divorce made the house a lighter place for me to live. What truly unsettled me was the financial insecurity that followed, where we had to sell our dream home after owning it for only nine months, not to mention cut back and re-evaluate every dollar we spent as a family. Things that used to be givens, like annual trips to my visit my cousins and my private school tuition, were now uncertain extravagances. As my mom was dealing with splitting from her husband, losing her job, and the house she could no longer afford gathering dust on the market, I broke down in angst frequently, always at home, always at her.

“Wahhhh,” I’d fake-sob. “You don’t even understand, today was sooo hard and I have sooo much homework, I can’t even touch a pan right now.”

“I pay for this house,” she’d reply. “Do you like living in this house for free?”

I would glare at her over another one of her gourmet dinners, blaming our nightly meal for my high school weight gain (when really it was all the beer I had begun to drink on the weekends). Every Sunday night, inevitably stuck on an essay due first period the next morning, I would take her to task for sending me to a prestigious all-girls high school—because, even though the education was fantastic and I knew it, it was, like, totally ruining my liiife and it’s your fault!!! When she sent me opportunities to do paid graphic design work for her and her friends, which both funded my funtimes and built my portfolio, I bitched endlessly about the workload. Basically, I was insufferable. And yet she suffered me.

My mom: “Dylan, I think you’re being too hard on yourself here. You’ve always been a great kid, with a good work ethic and remarkable authenticity. I love that about you. When it came to giving you guidance, it was actually easier with your father out of the picture. Everything became so clear. My voice was true. I knew what to do. I could see your confidence and faith in yourself building.” All right, Janet’s pretty spectacular. To stick up for, and to stick by, the mess that I was is an act of extreme trust and love that I still feel unworthy of.

Eventually, though, I got the new picture. My dad’s sudden absence meant a lot of things, obviously, but one of them was losing around a third of our household workforce. “It was down to the two of us,” my mother said. “We both needed each other, and I needed you to pitch in. Anyway, it was the right thing for you at your age, even in an intact family.” I mean, she has a good point. And I’m thankful that I was forced to finally take responsibility for the stake I had in the physical and emotional state of our household. If I didn’t put in my share of cleaning the floors, earning my own spending money, and walking the dog (who was technically mine, after all), who else would? And if I was feeling like a brat (approximately 73 percent of the time between the ages of 12 and 18), acting on that feeling would drag 100 percent of the house down, because there was no one else at home for either of us to interact with (besides Sammy, who was actually a really good buffer when he needed to be).

My friend Aki’s parents divorced around the same time as mine, and when we lived together we had a lot of late-night talks over bowls of cereal (hashtag college) about what it was like growing up with a single mother. I asked her for another one of those sessions, without the cereal this time, for this piece.

“Why were we so shitty, anyway?” I asked her.

“After my parents’ divorce, as I was on the brink of becoming a teenager, I began to see my mom as an individual being, rather than the holy, unblemished, and infallible mother that I wanted her to be. I wasn’t ready for that,” Aki said. “My mom used to say that I was punishing her for being a person. I used to scream back some asinine teenage remark, but by the time I hit my late teens, I began to realize that that was exactly what I was doing. I was punishing her for living her own life out of anger over the lack of control I had over mine.”

Our new life had lessons for my mom, too. “What I learned about relationships didn’t save a marriage that was doomed by a chasm in values and loss of trust,” she said. “But I became a better person. I understood for the first time how to express my needs while honoring others. I asked you to consider my feelings and contribute. Seeing you now, I’m kinda happy about that.”

Just like with Aki and her mother, I had a hard time adjusting to this new version of my mom, this woman who trusted me and treated me like an emotional equal. A mom who expected me to consider her feelings as well as my own. But I had to start seeing her as a person, not just as Mom, so that I could eventually feel like an adult with her. I was called on to act like a grown-up before I really was one, but it helped me mature in a way that I’m proud of now.

On each of my birthdays, my mother reminds me of a theory that she holds dear: that before each person is born, the future-baby spirits choose who their parents will be. I’ve always been baffled by her fondness for this notion, since her own mother was depressed, unstable, and unsupportive. Why would anyone consciously choose such a mean mom?

“Well, needless to say, when I first heard that little adage, I nearly retched,” she told me. “How messed up was I to pick my mom? I have lots of regrets. I just try and leave them in the rearview mirror. But one decision I’m endlessly happy about: to be a mom. I was overwhelmed about being pregnant, then it was you. And I knew.” If I had picked her, she said, she was going to be worthy of that choice. “When I stepped outside myself and watched myself with you, I marveled. I knew I was doing pretty good. I didn’t know I had it in me! Mother’s Day is my favorite day of the year now.”

Whether I chose Janet Tupper way back when I was a speck of cosmic dust, or if it was just the luck of the draw, I couldn’t have hoped for anyone better to have on my team. Just me and her, figuring it all out together: that’s what family looks like to me. And it feels like this is what we were supposed to be all along. ♦