A thank-you note to an artist who was always there when I needed her. 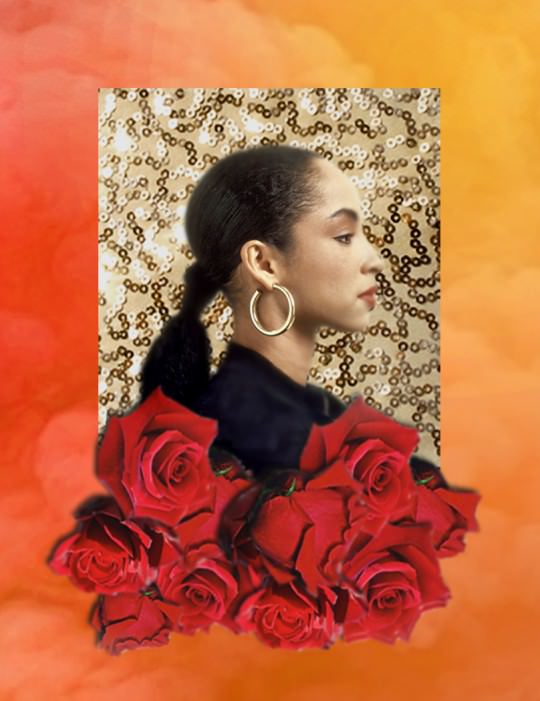 In my old house, in my bedroom closet near the ceiling, there was a shelf where my family kept their music. Somewhere between my father’s jazz and soul and my mama’s Joan Armatrading were the Sade records, and growing up, it seemed like every party at my house ended with their music. I have vague memories of sneaking out of bed and watching my parents sway to the melancholy sound of their songs long before I was old enough to appreciate them.

Then one Saturday morning, while rummaging through our collection of VHS tapes, looking for something to occupy myself before The Magic School Bus started at 7 AM, I found one with my mom’s recordings of music videos. To be honest, they didn’t really hold my attention—until I got to the mermaid. She was sitting on a rock and singing some soul-stirring sadness that I just couldn’t hear because I was so mesmerized. I thought Ariel was the only mermaid! I was thrilled to see this creature with brown skin and brown eyes and black hair like me and my mama and the other women who looked like us. As usual, I sat too close to the television and took it all in. The underwater kiss with her man made me cringe a little, because, at eight, people kissing on screen made me ashamed to have eyes, but holding her breath for that long? Definitely a real mermaid. My mother was so amused by my certainty regarding her existence that my parents kept the myth alive for as long as they could, right along with the Tooth Fairy and Father Christmas. Thus Sade, lead singer and primary songwriter for the band of the same name, became my own piece of magic.

Nine years later I had my first real heartbreak. The boy I was dating at the time had gotten into a minor car accident with his ex on New Year’s Eve and I was so concerned for his well-being that it took a little while for the naïveté to wear off. After it did, I felt like the “King of Sorrow”:

I ended up breaking up with him over text. Like an unexpected rainstorm, Sade’s music suddenly poured over me, and the lyrics finally had significance. There I was at 17, thinking that I had just endured the worst heartache in the history of the entire world, and then I listened to “Love Is Stronger Than Pride” and “Somebody Already Broke My Heart.” The songs molded my misery, giving it form but also containing it. I remembered my mama going through the divorce all those years ago and, oh god, I could relate. Thinking of how she kept her head held high throughout that ordeal really straightened my spine, and Sade seemed to place my story right next to hers. “I am my mother’s child,” I told myself as I cued up “Keep Looking” for the umpteenth time.

Her voice reminds me of a Tuesday morning in autumn: comforting, calm, and clear, with just enough wind and worry to keep me hanging on her every word. Even at 8, while I watched my parents dancing when they thought I wasn’t looking, I knew that some of life’s beauty, once witnessed, can hold us captive forever. Now it’s as if Sade has been there through everything: when I met my last boyfriend (“Smooth Operator”), and finally dated him (“Kiss of Life”), and decided I loved him (“Cherish the Day”), and broke up with him, cried, and got over him (“Love Is Stronger Than Pride” again), and then saw him in a magazine with his new girlfriend (“Is It a Crime?”), after which I realized how much I actually still resent him.

Last year, I read that VH1 ranked Sade at number 30 on a list of the “100 Greatest Women in Music,” and I had an eye-rolling fit: how could they position her so far away from the top five?! (Then again, Fiona Apple was 55, so what do they know?) I suspect the reason she wasn’t ranked higher is because, despite her one-name status, she remains something of an enigma.

I’m used to being able to access any information I want about anyone in the world in a matter of seconds—especially anyone who’s been famous for longer than I’ve been alive—so I’m always intrigued and kind of pleased when I try to Google something about Sade and come up terribly short. Here’s what I know: she was born Helen Folasade Adu in Nigeria, and later moved to London. Her middle name reportedly means “honor confers a crown” in Yoruba (because her parents surely understood how majestic their daughter was). She studied fashion design at St. Martins College, and some time in the early ’80s, she met the members of her band—guitarist/saxophonist Stuart Matthewman, keyboardist Andrew Hale, and bassist Paul Denham. They had a breakout hit in 1984 with “Smooth Operator,” which has probably been stuck in your head since I mentioned it a few paragraphs ago, and have won four Grammys. She has a partner named Ian Watts and a 16-year-old daughter from another relationship, they live in rural England, and other than that, I’m not so sure.

So yeah, Sade is clearly not desperate for the limelight—a decade passed between the release of Lovers Rock (2000) and her latest, Soldier of Love (2010). (Also, is the fountain of youth in her backyard? She’s 51 in this video for “Babyfather.”) I have a massive amount of respect for that kind of self-preservation, and I also think it makes her music more interesting: instead of inviting me into her experiences, she opens the door for my own feelings. I can appreciate the full magnitude of the songs right at the point in my life when I needed them most—when I can relate to the pain of heartbreak, of loneliness, and of everything I sacrifice to avoid them. “Haunt Me” could be an ode to friendship—“If it’s help that you need / never dare to doubt me”—but for me it’s about self-reliance, an appeal to my more-resilient self to overcome the ocassional depression and keep rising. In an era when everyone is compelled to share so much of themselves, it’s refreshing to see someone draw the line between performance and self, to be a human being rather than a commodity. It means she knows her own value, but she doesn’t buy her own hype; she’s obviously the namesake of her band, but she isn’t looking to be bigger than anyone else.

It’s this combination of confidence and humilty that I admire most. As a writer and poet, I always want to compose poems that Sade would approve of. “I only make records when I feel I have something to say,” she says in her official bio, and I concur. She’s taught me to love and privilege my words and the emotions they evoke, and for that I’ll be forever grateful. So this is my way of giving Sade the number-one spot she deserves. ♦