I’ve become obsessed with the dark side of Disney. 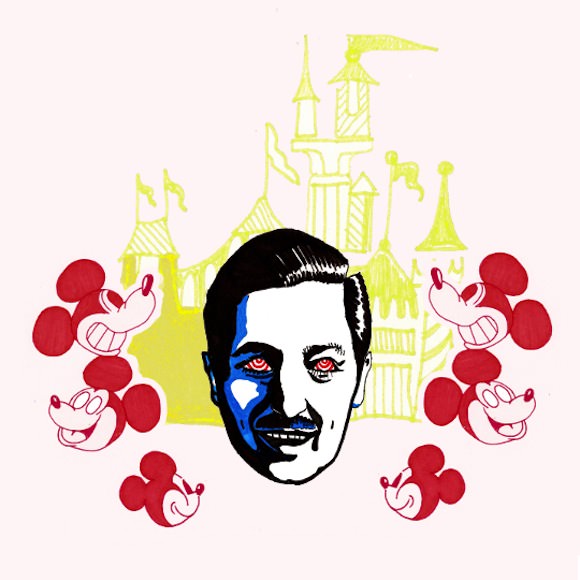 The Walt Disney Corporation has, for the better part of the last century, been the world’s leading purveyor of family-oriented entertainment; today it’s fair to say that the name Disney is synonymous with childhood and fairy tales. Also, the first penis I ever saw was on the cover of a VHS copy of The Little Mermaid. I was seven years old. The penis was very whimsical (it was gold and it sparkled!), as one might expect a Disney penis to be, and figurative rather than literal: on the cover of the video, in the background, just behind Ariel and Prince Eric, there was a castle with a spire that was undeniably phallic. Or would have been if I had known what a phallus looked like back then, which I didn’t. The summer between second and third grade, I watched The Little Mermaid at least once a day. The video’s case was always just lying in the middle of the living room floor, so I’d probably looked directly at the castle hundreds of times. It wasn’t until later that year when I overheard several adult members of my family discussing a rumor about a hidden penis on that cover while pointing out the offending spire that I even knew that there was something unseemly about it. 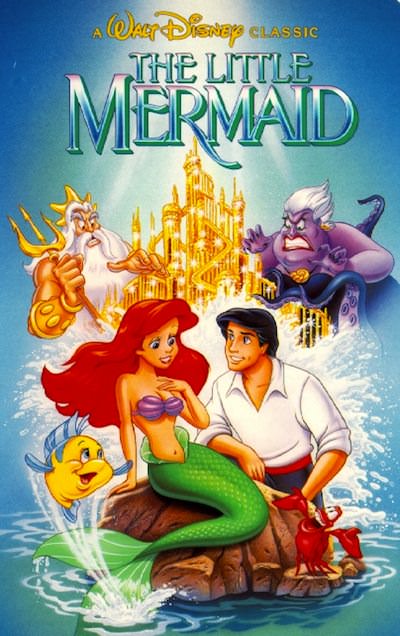 The 1990 VHS cover art. See if you can spot the offending spire!

This news was funny to me for the same reason that I it was funny when kids cussed in front of teachers—it was wildly inappropriate, and that made it deliciously entertaining. I wasn’t traumatized by this subliminal penis (but I am obsessed with castles to this day, so feel free to interpret that any way that you’d like), and I wasn’t at all disillusioned with Disney or The Little Mermaid after finding out about it—I continued to buy into the Disney fantasy, the magic, and the “happily ever after” of it all. But this was both the first time I saw what was possibly an illustration of a penis and the moment I began to realize that Disney is sort of twisted.

Disney dismissed any similarities between the male reproductive organ and the Little Mermaid spire as coincidence. Of course that’s what they would say, though, so who knows if they’re telling the truth. But Disney’s wholesome image is so painstakingly constructed that it’s alarming and in some cases kind of exciting to find out that there may be a darker side to the company—a company that was built almost 90 years ago by brothers Walt and Roy Disney around the idea of good, clean fun.

Recently, I’ve been actively searching for weird stories about Disney. My curiosity was sparked a couple of years ago after reading an article about actual human remains being found in the Haunted Mansion ride at Disneyland. Though Disneyland’s spokespeople deny it, there have been rumors for years that visitors have been scattering the ashes of their deceased loved ones, likely Disney über-fans, in the park’s ghost themed attraction—a notion that is at once touching and unsettling. But even before I started collecting strange Disney anecdotes, peculiar details about the company’s movies, theme parks, and Walt “everyone knows this dude is cryogenically frozen” Disney had sort of trickled down to me over the years.

When I was in high school, for example, the big Disney-related gossip was that there were secret sexual messages hidden in Aladdin and The Lion King. There is this balcony scene in Aladdin where you can allegedly hear Aladdin say, “good teenagers take off their clothes”:

…and in The Lion King there’s a scene where leaves float up into the sky and appear to spell out the word sex:

At a sleepover when I was 14, the party’s host dug up her old VHS copies of these movies and we watched the supposed risqué scenes over and over again. This was my nerdy, Disney-loving crew’s version of playing records backwards and listening for demonic messages. It was kind of thrilling to think we were uncovering something lewd, that we were in the know.

As it turns out, the questionable moments in Aladdin and The Lion King were actually innocent and simply misinterpreted by viewers like my friends and me, who were maybe hoping to find something scandalous. However, 1977’s The Rescuers (a kid-friendly animated movie about two mice who help save an orphan girl while wearing really awesome hats) did briefly feature a small photo of a topless woman in the background of one scene, presumably inserted by some devious, bored, or perhaps disenchanted member of the production staff. As the movie’s two main characters fly through New York City, the topless woman appears behind them for a split second—it happens so quickly that you’d have to play the movie in slow motion to see it. After discovering the image in 1999 (after it came out on VHS, allowing people to for some reason play it in slow motion, carefully studying each frame), Disney recalled all home video copies of The Rescuers; the topless woman was removed from the subsequent rerelease of the movie.

This kind of intentional mischief is rare, though; most of the disturbing stories about Disney’s products are as insubstantial as The Lion King’s floating leaves, held aloft by flights of fancy. But there’s one Disney creation whose creepiness is overt and persistent: the jewel in the company’s crown, Disneyland Park.

Opened in 1955 in Anaheim, California, Disneyland was designed to be a mini paradise, “the happiest place on earth,” as the official tagline goes. Walter Disney, a prolific cartoonist and animator whose already considerable influence in Hollywood was on the rise, was inspired to design the park after visiting some lame, boring amusement park with his two daughters. “I will build a park way doper than this. For I am Walt Disney,” he probably didn’t say. His park would be perfectly clean and perfectly organized, and it was more than just kiddie rides—Walt designed it to trigger a sense of nostalgia and warmth in older visitors (one of the park’s attractions, Main Street, U.S.A., resembles an early 20th century American town square). The park was also meant to offer an escape from the real world—according to a book by David Koenig called Mouse Tales: A Behind-the-Ears Look at Disneyland, Walt even got the city of Anaheim to agree to never construct any buildings that would be visible from inside of the park’s gates, so as not to disrupt the fantasy world he’d created.