How I fell in total love with my own body.

Elfy and Ozma Go to Earth 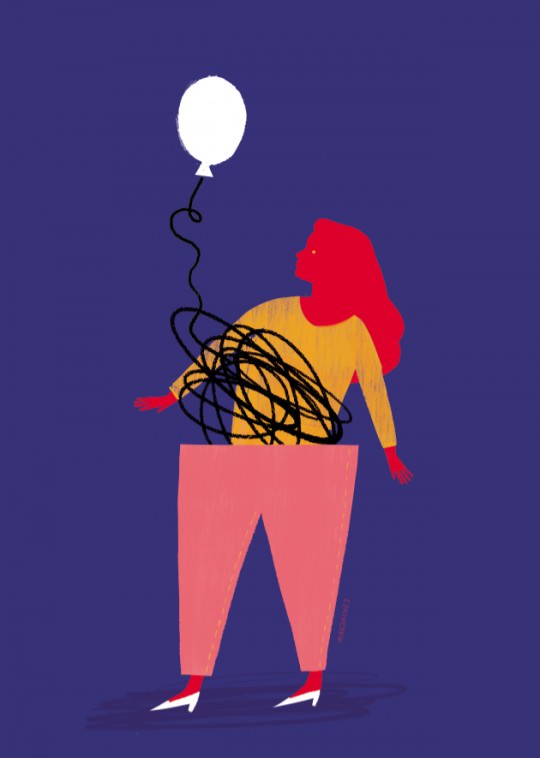 Like most fat adults, I have wasted years of my life feeling shitty about my weight and trying, through diets, to reach an arbitrary number on a scale, each time feeling worse about myself than when I started. It took a long time, but I figured out how (and why) to stop doing that. Here’s how it happened.

I somehow managed to make it through the majority of my childhood with pretty healthy self-esteem. Once in a while my grade-school classmates made mean comments about my chubby body, and it hurt my feelings, but overall I thought I was pretty rad.

That changed in seventh grade, when I transferred schools because I wanted to be challenged academically. I was an overweight biracial girl who went from being one of the smartest and most popular kids at my public school in Detroit to feeling like the complete opposite at a prestigious, overwhelmingly white private school in the suburbs. I didn’t have the same skin color, body type, education, or social status as my new classmates, and I began to question how I could have ever believed I was smart or attractive. Though I was eventually able to get good grades and regain confidence in my intelligence, my feelings about my looks were not so resilient.

This was my first real encounter with the Fantasy of Being Thin, which is the idea (that so many people buy into) that life will magically improve once you reach your “goal weight.” The fantasy intensified when I entered high school. Unlike my middle school, my high school was coed, and I developed crushes on lots of guys. I was constantly daydreaming about how wonderful my life would be once I was skinny—how all the boys I liked would love me, how all the girls I hated would be jealous of me, and how blissfully happy I would be. While I recall long stretches of time during those four years when I wasn’t obsessing about my body, somewhere along the way I managed to try the Atkins Diet, the Master Cleanse, and countless other weight-loss regimes. I’d inevitably give up after a few days or weeks and then berate myself for yet another failed attempt at thinness. I graduated high school weighing noticeably more than I had when I’d entered.

My first significant weight loss came the summer after graduation. This is every fat teenager’s dream, right? To shed your former identity and enter college as someone new? My mom, who had encouraged my past dieting, was more than happy to help. She’d heard about a local clinic that had a summer weight-loss program for teens. We attended the informational meeting together, where we were told about success rates and reasonable expectations. My mind was made up—I was going to do this.

After getting the green light from a doctor, I started going to weekly classes where we learned about “healthy eating” and exercise. In retrospect, I think this program was absolutely horrid: instead of teaching us about balanced eating and nutrition, we were given prepackaged meals and weight-loss shakes, and taught to count calories. We were actually encouraged to drink diet soda, because it had no calories! (There’s nothing wrong with choosing to drink diet soda, but I find it misleading to suggest that it’s good for you.) Alas, it is possible to lose weight on such a program, and I did. Watching the numbers drop made me feel high. I started running three times a week, for hours at a time. I meticulously tracked every single calorie that entered my mouth. When the program ended two months later, I’d lost even more weight than I’d anticipated.

I was convinced I’d keep dropping the pounds in college, but things didn’t go quite as planned. Like most people’s freshman years, mine was filled with lots of Easy Mac, cheap beer, and midnight pizza runs. I stopped losing weight and started gaining. Then, that summer, right before school started again, I got sick. I could barely get out of bed for a week. While at the doctor’s office, I picked up a pamphlet on HIV and scanned the list of symptoms of the disease’s onset. I realized I had every single one. I freaked out, was absolutely convinced I was HIV positive as the result of one or two unprotected sexual encounters. At the time, you had to wait three months after possible exposure to be sure the test results were accurate, and so began 12 weeks of torture. To make matters worse, right around this time the guy I was madly in love with broke up with me.

I didn’t talk to anyone about what I was going through. Instead, I fell into a deep depression and alternated between crying hysterically and feeling numb. I barely made it to any classes. My hair started to fall out in chunks from stress. I contemplated suicide. And, yes, I lost weight. I was absolutely terrified and miserable and thought I was dying, and meanwhile people were telling me how great I looked. I was closer to my goal weight than ever, but happiness couldn’t have seemed further away.

By the next semester, I’d gotten over the heartbreak, my health had improved, and my tests had come back negative. This was all obviously a huge relief, but my body image issues picked up right where the other stuff left off. Any excitement from the weight loss was soon overshadowed by feelings of not being thin enough: I was back to my ninth-grade size, but I was still the heaviest in my group of friends, and I couldn’t fit into the largest pants at most designer stores.

It was at this point that fate intervened, in the form of LiveJournal. I’d discovered the social network/blogging platform in high school, and had been casually using it as a sort of personal diary. Then a college buddy introduced me to the LJ communities—groups filled with folks who shared common interests: fashion, celebrities, TV shows, cooking, you name it. I joined a few, and slowly started interacting with people, eventually making friends and forming deeper relationships. Because we didn’t know one another in real life, everyone seemed comfortable sharing their secrets and insecurities, without fear of judgment.

One group, Fatshionista, called itself “a place to discuss the intersections of fat politics and fat fashion.” I’ll be honest—I had never heard of “fat politics,” nor did I have any interest in it. I joined simply because I loved fashion and the idea of sharing style tips with a community of other fat girls. I checked the site daily, scrolling through endless posts in which large women shared photos of their outfits. At first I found myself judging their bodies and their clothing choices: I’d look at women in baggy T-shirts and matronly dresses and wonder, Why would she want the whole world to see her looking like that?

But over time, something funny happened: Without any conscious effort, I started see those women’s bodies differently. I no longer saw them as gross or unattractive. As I became more active in the community, I found myself browsing the more political posts, the ones criticizing our culture’s obsession with dieting and thinness. It got me thinking, and I decided to take a small step: I’d take a break from reading tabloids and mainstream lady mags that compared bodies or doled out advice for slimming down, and instead focus on positive portrayals of bodies that looked more like mine. Over time, fat bodies began to look not only normal, but beautiful, to me. And eventually, slowly, I fell in love with my own.

My next step was to make a conscious decision to stop having conversations about other women’s looks, on the internet and in real life. I stopped participating in negative body-talk with friends—I tried to be supportive of their concerns about weight, but I refused to engage with the topic. It’s amazing how when you exercise positivity and compassion toward others, it magically turns inward—this one effort made an unimaginable difference in how kind I am to myself.

All the weight I had lost in the previous few years, I gained back—hardly a surprise, since I’d lost most of it by undereating and getting sick. This time, though, I didn’t beat myself up about it. I let go of my need to constantly monitor my caloric intake. I allowed myself to enjoy food again. I graduated from college at my heaviest weight, and I was more in love with my body than ever. I started a blog that encouraged other women to have fun with fashion regardless of their size, and that has since become my career! I now get emails from girls who say that scrolling through my photos has kept them from feeling ugly or worthless.

When people ask me how they can stop hating their bodies, I always suggest that they limit their mainstream-media intake and replace it with body-positive media. LiveJournal is pretty much dead now, but the fat-positive movement is going strong on Tumblr (check out activists like Jessica Luxery and Margitte Kristjansson); there are tons of plus-size fashion blogs (Franceta Johnson and Nicolette Mason are two of my faves); and the former Fatshionista moderators, Lesley Kinzel and Marianne Kirby, now write regularly about body politics for xoJane. These are the things I choose to look at daily, and I can now appreciate other women’s bodies—of all sizes—without judgment or jealousy. I read mainstream magazines again (I even write for one!) and I watch TV with a critical eye, which allows me to avoid internalizing the endless body-shaming messages that used to make me feel inferior.

As I get older, I find that I’m more interested in educating myself about how certain foods can help bodies fight sickness and disease. This past year I’ve made a concerted effort to eat more whole foods and less processed stuff—and it’s actually been fun. Now I’m able to choose healthy options because they make me feel great, not because I think it will lead to weight loss, and I can’t tell you how freeing that has been. I may drop 50 pounds as a result of the changes I’m making, or I may not lose an ounce. Either way, I’m fine. ♦