It was a guiding light, leading me through an assortment of options for my new, disgruntled identity. 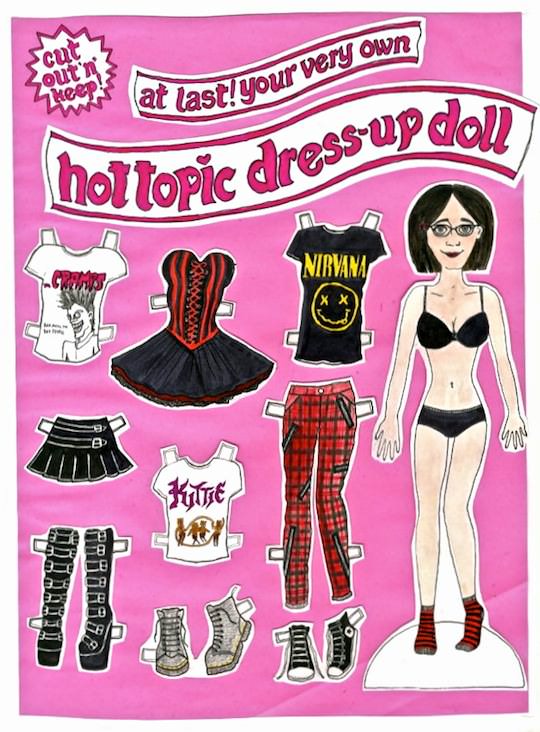 I am well aware that Hot Topic is an emporium of diluted subcultures where nothing is so fiercely independent that it can’t be commodified. The store’s motto is “Everything about the music,” but what they probably mean is “Selling music-inspired apparel to a mass market is really profitable!” But you know what? I don’t care. I love Hot Topic, and have since the first time I walked through its arched industrial doorway in high school and entered a magical place where feeling misunderstood, which was my jam at the time, was actually cool.

I grew up bouncing between my mom’s house in Los Angeles and my grandparents’ apartment in Queens, but right before I started high school, my family settled down in a tiny suburb of Ohio called Westervillfe. It was painfully boring there; I missed going to museums and the beach, and being around people who didn’t all look and dress exactly the same. I felt like a complete stranger among my new classmates—because I was. Most of them had grown up together. Soon enough, I found there were all sorts of unwritten rules that dictated everything from the type of car that was OK to drive (preferably a brand-new Audi) to the way you wore your hair (in a ponytail, sometimes with a ribbon in the school colors, maroon and gold). I strolled through the hallways wondering, WTF is Abercrombie & Fitch?

I made literally zero friends that first year. As the new girl, I was an easy target, and people mocked me for everything from my acne to one very traumatic accident involving my period, which I didn’t know was coming until it had seeped through to my cafeteria chair. Offering me a maxipad in public became kind of a running joke among some of the popular girls. I started to hate everybody, and I latched on to their outward appearances as a symbol of how terrible they were, not even realizing the obvious parallel between my attitude about them and theirs about me. In my teen-angst-riddled mind, their preppy, pastel-hued, homogenous clothing choices were expressions of their bland, homogenous psyches. At the time—this was 2000—I didn’t know there were blogs or internet communities where I could share my frustration with like-minded teenagers across the world. My parents were pretty strict, and I wasn’t allowed online, except occasionally for schoolwork. So I took my angst to the only hang-out spot available to a 15-year-old in Westerville: the mall.

I had never heard of Hot Topic before I saw that disobedient red font standing out among the sedate logos of all the other stores, daring me to walk through its sewer-pipe-style entrance. 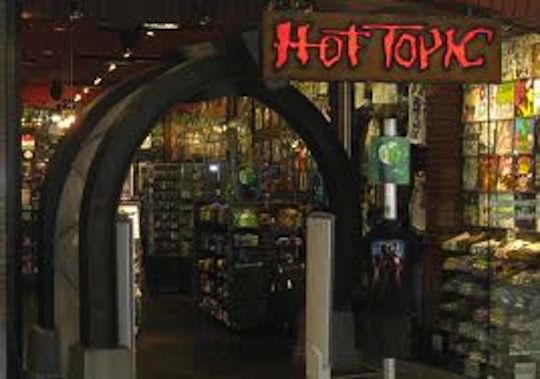 I took up the challenge, and was immediately enchanted. First, there were the employees: to someone who couldn’t find even one other misfit at school to share my weirdness with, they were downright inspirational. I especially remember the manager, Jody, in all of her deathrock glory: artfully destroyed fishnet tights; platform boots with buckles numbering in the dozens; pin-thin, meticulously drawn on eyebrows. I aspired to dress—and live!—with that much creativity someday.

The next thing I noticed was the wall of officially licensed band tees that spanned genres from pop-punk to hip-hop to thrash metal, and they sold CDs and vinyl, too—it was literally a subculture supermarket, and in Westerville, that was nothing short of a miracle. Without internet access, it wasn’t easy for a sheltered suburban kid to discover a band like NOFX—I didn’t have an older sister to tell me about them, or an effortlessly cool friend, or a great local record store (I can’t even remember there being a record store, beyond Best Buy).

I was ecstatic about what I bought during that first excursion: a white button-up with a pre-attached red-and-black tie with safety pins in it. What did I know? I hadn’t even heard of thrifting, and anyway, I would never have thought to put those elements together myself. Hot Topic did the thinking for me, and I welcomed the help. The store was a guiding light, leading me through an assortment of options for my new, disgruntled identity.

Was I a punk? A week of listening to Punk-O-Rama: Vol. 6 quickly disabused me of that notion. Bad Religion’s “I Want to Conquer the World” is an objectively great song, but nothing about the music really resonated with me. (I loved compilation CDs—there was no better tool for figuring out what I liked.) Was I a metalhead? For a while, sure. I flipped through a magazine at the store—I can’t remember the name of it now, but it was like Tiger Beat for hard-rock enthusiasts, featuring interviews and pull-out photos of Otep and Korn. My late freshman/early sophomore years were spent plastering my bedroom walls with posters of Kittie and obsessively phoning Total Request Live to vote for “Falling Away From Me.” I wore giant band tees with wide-legged JNCO jeans, and a spiked necklace that I never took off, not even in the shower. During that period, the caustic rage of this music was my only solace from the loneliness and boredom I experienced in my school and my town; I headbanged alone in my room to “Paperdoll” and felt like Morgan Lander was speaking directly to me.

By junior year, though, not even lyrics like “Now her soul is dead / Now her body’s raw / WASH AWAY HER PAIN” could save me (nor, indeed, wash away my pain). My anger congealed into a dark depression, and even though by then I had a couple of friends at school and even a boyfriend, I struggled with self-loathing. My mom and I fought all the time. She didn’t approve of my wardrobe or my interests, and I suspected she might be reading my journal, which made me stop writing in it. Each day became just something to get through.

Maybe it sounds strange, but the only thing that made me feel better was finding a sartorial aesthetic that perfectly expressed my inner sadness. I figured if I was living with these feelings, I might as well revel in them. During my regular visits to Hot Topic, I was drawn to clothes that were comfortably confrontational, like Lip Service’s fishnet tops and corseted dresses and Tripp NYC’s bondage pants. I fell in love with a dress I wore to the homecoming dance—it was maroon with black lace, gesturing toward a romantic melancholy.

I didn’t realize that there was an entire cultural scene based on the kind of gloominess I was feeling—had been for decades, in fact. I don’t know how I came into possession of the Cure’s Disintegration—maybe I heard Marilyn Manson mention it in an interview, or found it among Hot Topic’s stash of Good Charlotte CDs, underneath the display of Joy Division T-shirts. But that album was exactly what I had been searching for. When Robert Smith desperately sang/shouted, “It’s easier for me to get closer to heaven / Than ever feel whole again,” I heard my intense longing for something in his voice. I immediately went to the record store in Columbus, of which Westerville is a suburb, to buy the Goth Box, which introduced me to bands like Christian Death and Alien Sex Fiend, and I grabbed hold of my new identity and ran with it. I wrote long poems on my LiveJournal, channeling my pain into gibberish that made sense only to me: “Tenderize the rarest bones and die / But let the grass grow where the flesh meets the sand.” I wore all black—black clothes, black nail polish, black eyeliner—and whenever I saw someone similarly attired we’d make eye contact for a split second, and it felt like a secret handshake, like I was less alone in the world.

When I turned 18, I started going to Outland, central Ohio’s biggest (only?) goth club, where I could dance all night to Sisters of Mercy, Queenadreena, New Order, Crüxshadows, and Adult, in a room full of poeple who looked and felt like I did. I had finally found a community. I made friends, I moved out of my parents’ house, and I felt less isolated and depressed.

Sometimes I’d run into Jody, the old Hot Topic manager, there. She remembered me from the store, and even though she probably knew I bought those clothes before I knew what they were trying to signify, I never felt like she judged me as a “poser.” Not everyone is savvy or self-assured enough, especially in high school, to know exactly who they want to be, nor how to be that person. I was, I don’t deny, an average suburban white kid looking for entry-level subversion, and Hot Topic supplied it. And for that I will be forever grateful. ♦

Meagan Fredette is a 27-year-old feminist style blogger at Latterstyle. She lives in Chicago and enjoys dreamy music, The X-Files, and riding her bike.