What is it? Is it real? A semi-scientific inquiry.

2. Slow down in the beginning; take some time to get to know the person before you go all in. Say you’re trying to quit smoking, but you’re craving a cigarette really bad. You know that smoking one will immediately make you feel better, but you also know that long term it’ll kill you, so you have to overcome the desire for instant gratification with logic, reasoning, and a genuine desire to change. It’s the same way with the drug called love at first sight. Tell your dopamine receptor to calm down—you’ll get it some more drugs in a minute, but right now you’re trying to be reasonable. Work hard against indulging your addiction to this new “perfect” stranger so that you can determine if they have the qualities you’re looking for in a partner (refer to your list), and so you can spot any red flags.

3. Have faith that if you want it, you can find romantic love and attraction with someone who doesn’t immediately drive you wild. This is the hardest one. If you find yourself generally drawn to people who are good for you, skip this paragraph. But if you, like me, always get it wrong, maybe you need to step outside your comfort zone and date against your “type.” This will mean that you might not get that big dose of dopamine upon first glance, but trust me—it can come later. I’m not talking about dating someone you don’t even want to like, but if you find someone who meets your list of requirements, and you like hanging out with them, think about giving them a chance. This isn’t the same as stringing someone along, telling them that you care for them more than you do—that’s unfair, and it can be really hurtful. I’m just saying spend time with the person. Go on dates, be friends, flirt, and see what happens. A lot of us have had the experience of falling in love with someone we used to think of as “just a friend”—it’s totally possible, but you’ll never know if you just write off anyone who doesn’t make your brain chemicals go crazy right off the bat. Which leads me to:

4. You don’t have to take every crush seriously. Sometimes crushes are just a fun way to learn how to draw new initials graffiti-style—they do not all have to lead somewhere. It’s even fun to have five crushes at once, one for each of your different alter egos. “Love at first sight” is a feeling, not a commandment. Wallow in it, fantasize, blush when you talk to her/him/them, and enjoy it, but take it easy if you can. More often than not the person will end up doing something unattractive enough to cure you of your crush before anything exciting happens anyway!

But what if you’ve never been in love at first sight? Does that mean there’s something wrong with you? No! You deserve a gold star, because you, my dear, are a well-adjusted, reasonable person unfazed by wayward chemicals and un-dealt-with childhood traumas. You will most likely have a much easier time finding true love than the rest of us. Or you might not even be interested in romantic love at all, which would be such a relief, and I am jealous of the time you are spending trekking through Nepal, or writing a book, or becoming president, or doing really complicated origami.

So, after I had crossed an international border to be with him, and lived with him for a while, things with my last LAFS (ha!) started to go downhill, and then degenerated even more, until we finally had this exchange (over the phone):

Him: I don’t love you.
Me: What? [aaand crying]
Him: Eh, it happens. People stop loving people all the time. You need to accept that.

And that was that. That breakup hurt so bad that I finally stopped trusting my own heart (or, more precisely, my own eyes) when it came to guys. For whatever reason, there is a bug in my system where if I meet someone who makes me feel all swoony right away, I can pretty much guarantee that they’re not going to make me happy in the long run.

I was single for a few years after that. Anytime I found myself attracted to someone, I ran fast in the other direction. Meanwhile, I started going on dates here and there with people who didn’t zing me off my feet, just to see what I’d been missing. Turns out I’d been missing a lot! And being treated with respect and kindness made up for not getting the dopamine rush I chased for so many years.

Then one day I ran into a friend after a comedy show, and after we’d exchanged some niceties, he asked if I was dating anyone. I told him no, and he said, “Great. You should go out with my friend Julian.” And he showed me this picture on his phone: 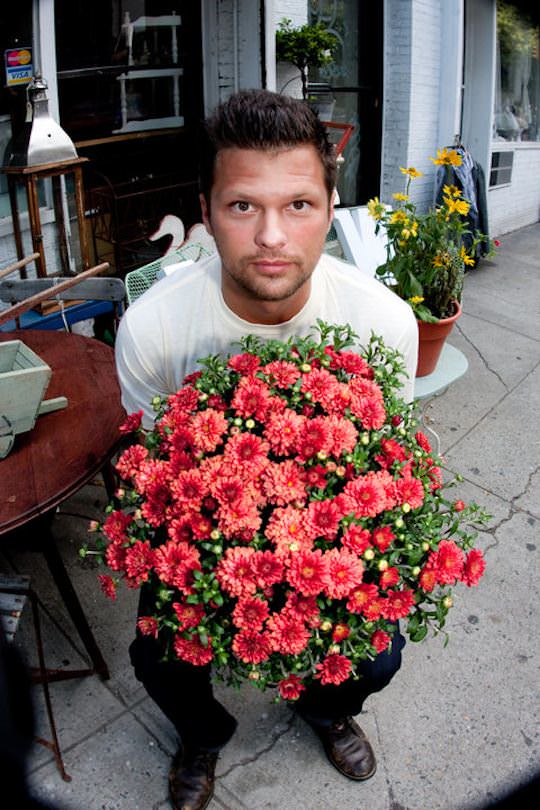 If I’d seen that picture a few years earlier I’d have been like, He’s a nice-looking young man. Yawn. He had none of the brooding, none of the just-under-the-surface anger, that I am naturally such a sucker for. But now I was like, Oh, wow, that’s…different. He looks…sweet? Sure, I’ll give it a try.

On our first date, my earlobes didn’t get hot, my stomach didn’t do flips, my heart rate was steady. No magical fairy dust fell over my eyes when I laid them on him—but now, a few years later, I’m DROWNING in it. Love at first sight has nothing on the feeling I get from the fresh flowers my husband sends every time he has to leave town, along with a note that says “BRB.” ♦

Jane Marie edits The Hairpin, covers beauty for Makeup.com, writes recipes, does nail art, and knows how to fake calligraphy.