Looking Back on Love

How Lenny Kravitz brought out the worst in me, and the best.

Songs in Our Hearts 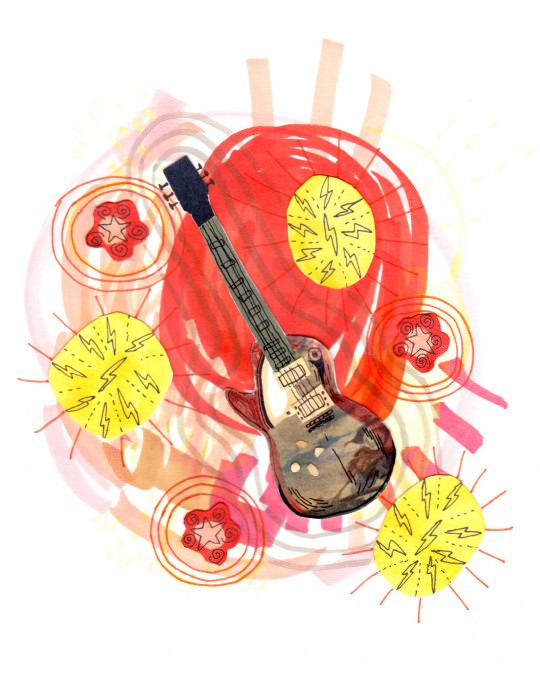 From the time I was a little girl, I have always felt like “the other.” I was born in South Carolina, to two professors at a historically black college, and lived there comfortably until I was five, when my parents both got teaching positions in Riyadh, Saudi Arabia. The first place we moved into was a compound for expatriates (people who are in the country on business, usually only temporarily) where there were few other Americans, so we really stuck out. I went to an international school, where I was often the only African-American in my class. But that’s not the only thing that made me “different.” Most of the other kids’s parents were executives at airline, tech, finance, and oil companies, private-defense contractors, or in high positions in the military. In contrast, the progressive academics who raised me must have seemed like raging bohemians.

A few years later, my folks became health-care administrators in a city 600 miles away called Jeddah, and I transferred to another international school, where it was the same deal. I remember that my mom was the only one who arranged for her assistant to send éclairs from a French bakery to my school potluck—all the other moms had made their contributions themselves, because, unlike my mother, most of them didn’t work outside the home. When my school had a mock election during the 1988 presidential race in the U.S., I was completely shocked that most of my classmates voted for George H.W. Bush, the Republican candidate—though in retrospect, of course the culture of families in the military/oil/finance/private-defense industries is relatively conservative, just like it’s easy to predict that my family would be relatively (screamingly) liberal. So, it was a culture clash, but my culture included just me and my parents; and the other one was the rest of our world.

When the first gulf war broke out in August 1990, we were advised to leave the country, so we returned to South Carolina, where I attended a predominantly black low-income public school and was bullied and ostracized by the other fifth-graders for “talking like a white person” and listening to more rock music than rap. We returned to Saudi Arabia when the war was over, and that’s where I finished out junior high, still the “quirky girl,” “the weirdo.”

In ninth grade I was sent to a boarding school in Maryland, where I found others who shared my politics and feminism (and my love for My So-Called Life and Riot Grrrl music). I joined the best a cappella group on campus, and I got good grades. But I still didn’t feel like I fit in among my preppy, lacrosse-playing, Patagonia-clad classmates. I cringed every time some blue-blooded mom or dad, visiting for Parents Weekend, congratulated me for being there on scholarship (I wasn’t). “It is so wonderful to have you at our school,” they’d say. “We’re so glad our donation made it possible for you to experience such a great education.”

It was around this time that I first laid eyes on Mr. Leonard Albert Kravitz. I was watching MTV, and this video came on:

The TV sucked me in like a vacuum. The whole video is a big party scene that looked to me like the kind of soirée I’d like to host someday—loud, fun, multicultural, uplifting. And I was mesmerized by this man, who looked and sounded unlike anything on MTV at the time—back then the channel played music videos for most of the day, and the music was strictly segregated between white music (i.e., rock) and black music (hip-hop and R&B). Pop was a little more integrated, but when I say “a little” I mean literally it was all white people except for Michael Jackson, Prince, and Whitney Houston. But here was this black man with dreadlocks rocking out on a guitar, seeming intense and gritty and more “real” than any pop star. Oh, and it didn’t hurt that my teenage hormones thought he was the sexiest, hottest, juiciest, most delicious creature on the planet.

Lenny Kravitz had already been around for a few years at that point, but I had never heard of him, because the MTV channel in Saudi Arabia was the Asian one, and they didn’t play the same videos as American MTV. But from that moment on, I made it my business to find out everything about him. You might know him only as Cinna in The Hunger Games, or as Zoë Kravitz’s dad, but back in 1993 he was huge—known for his hit music, but also for being the son of Roxie Roker, who had been a star of the popular sitcom The Jeffersons; and for having just gotten divorced from the actress Lisa Bonet (Zoë’s mom), whom I idolized at the time.

At the beginning of his career, Lenny was rejected by a number of record labels, who told him his music wasn’t “black enough” or “white enough.” When he found success in the late ’80s, he still wasn’t a favorite among rock critics, many of whom said he was just ripping off Sly & the Family Stone, John Lennon, Jimi Hendrix, and Led Zeppelin—which made me really mad! I admired Lenny for taking rock back to its black (blues) roots, and adding in a little soul. Like me, Lenny represented a treasure trove of cultural and social contradictions. Half black and half Jewish, he defied mainstream race, class, and religious barriers with his music and his style, and came to define his own neo-soul, rock & roll, Christian mystic/Jewish/African-American/Bahamian/New York/Beverly Hills flavor. Instead of fitting himself into a little box to make executives at record labels or MTV more comfortable, he elected to be all of who he was, and to make a lot of noise about it.

Back in South Carolina, my love for rock music and Claire Danes made me not “black enough”; at boarding school my blackness guaranteed I would never totally blend in. I didn’t feel like I 100% belonged in either community; but I also knew my way around both. I saw myself as a bridge—someone who could walk between those groups and drift in and out of each. And so Lenny’s music made sense to me. I didn’t have to choose between R&B and rock; I could have the best of both worlds.