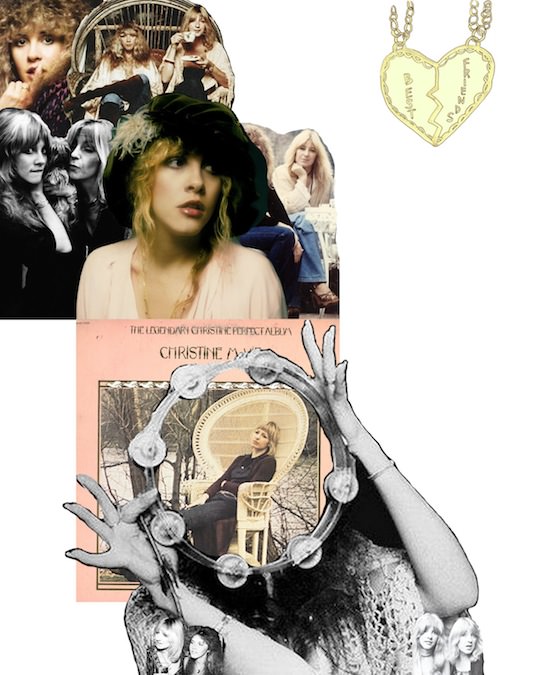 Illustration and collage by Sonja

In 1977, Fleetwood Mac released Rumours, a magical, haunting, complicated album detailing the breakups of the two couples in the quintet, and it quickly became the best-selling record of that era. The band had begun in the ’60s as a dude-ish blues-rock outfit, but in the early ’70s two women were added to the lineup: the British keyboardist/singer Christine McVie and a California-by-way-of-Arizona singer called Stevie Nicks.

In the band photo on the album’s back cover the two look like the same stripe of hip and witchy gals, but in their music they were opposites. Christine’s songs were breezy, romantic, direct—all smiley faces and hearts. Stevie’s songs were plodding, mysterious, and bittersweet—she sang about drugs, the man she’d loved (Mac guitarist Lindsey Buckingham), and her best girlfriends (she wrote the demo “Think About It” to support Christine during her divorce from Mac bassist John McVie). The two wrote an equal number of songs on this album, but the only number one hit (“Dreams”) was Stevie’s. Onstage, Christine sat behind the piano, while Stevie, who couldn’t play any instruments and so was given a tambourine, took center stage, twirling in her diaphanous gowns and enchanting the audience. She was the spectacle. Christine was the background.

In any true girl best-friendship, I think it’s natural to feel like one of you is the Christine, the competent one behind the shadows, while the other is the Stevie, the dazzling rock star with natural charm. If you’re the Christine, your friendship is like a passport to another life, and you feel extra-lucky that you get to know the private, life-size version of your sparkly friend. I know, because in seventh grade, I was the Christine, and my best friend, Jennifer,* was Stevie.

Jennifer was a master flirt who didn’t seem to come with the default mortal fear of boys that the rest of us did. She barely cared what anyone thought of her, period. And of course, since she didn’t care whether the boys paid attention to her, that’s all they wanted to do. They’d even meet up with her at the mall, which all the other girls in our junior high marveled at (the boys never wanted to go to the mall).

I was not a girl that boys wanted to get to know, but being Jennifer’s sidekick meant fielding endless questions about her from them, and there was a funny power to that. I was the one she hung with on the epic boring days, the one who knew who she really had a crush on. Friendships can be wholly different on the inside, and privately, Jennifer and I were equal. How other people saw us had no bearing on our closeness.

Christine had been in Fleetwood Mac for about five years before Stevie joined. When the band’s drummer Mick Fleetwood, proposed adding the songwriting duo Lindsey and Stevie to the lineup, he arranged for Christine to meet them. Recounting that meeting in the Fleetwood Mac bio The First 30 Years, Christine said, “The last thing I was thinking about at that point was another girl in the band. I had been so used to being the only girl!” But Stevie and Christine hit it off from the beginning. “I liked her instantly,” said Christine. “She was a bright, very direct, tough little thing. I liked her not because she was like me—quite the contrary. We’re complete opposites…. The one thing we had in common was a good sense of humor.” If the two women hadn’t become friends, the band wouldn’t have become what it did.

The first Mac record that the pair made together was 1975’s self-titled album, and listening to Christine’s congenial “Over My Head” vs. Stevie’s brooding “Rhiannon,” you can already sense the difference in their personalities. Then came Rumours. During the making of it, both Stevie and Christine broke up with their dudes, who were obviously still in the band—and in the recording studio, and in their faces all day every day while they were working in Sausalito, California. The ladies rented a condo overlooking the San Francisco Bay and retreated there while the rest of the band stayed up all night partying in the studio accommodations/rock & roll frat house. Christine and Stevie talked through their heartbreaks and hopes for the future, encouraged each other, and hid in each other’s rooms when their exes showed up drunk and yelling in the driveway, according to Ken Callait, who produced Rumours and co-wrote a book about it.

The band toured sporadically during the recording, and while “Over My Head” had given Fleetwood Mac their first hit in America, “Rhiannon” made it so girls started showing up to the shows in flowing lace dresses and silk hats and screamed when Stevie came on stage. When Rumours came out, it made the whole band hugely famous, but Stevie became an icon; the press dubbed her the “Queen of Rock.” Christine got no such honorific—she wasn’t the co-Queen, or the Queen of Piano Rock, or even, like, the Princess.

You’d think that sort of thing would cleave even the most solid of friendships, especially given that the women were also creative collaborators making art that was all tangled up in self-expression and ego. From the outside, you might assume that there was some competition between them, and that Stevie was winning it, because Christine seems subdued and plain and, well, Stevie is Stevie. She wore a top hat. But you never hear anything about jealousy or resentment between them, and if there were even a drop of it, don’t you think you would? People love to discover this type of tension, as if there can never be two of anything when it comes to women. It’s possible that Christine saw in Stevie what I saw in Jennifer: a rare person naturally suited to the spotlight. And maybe Stevie saw in Christine a genuine talent who didn’t crave or need fame.

The band reunited for a tour in 1997, but a year later, Christine, who had developed profound anxiety about air travel and performing, quit the band for good. Now Stevie was “the only girl” in the band, but she wouldn’t accept the mantle without Christine’s blessing (which was freely and gladly given). To this day, Stevie laments her friend’s departure. A month ago, she told the Guardian, “I’d beg, borrow, and scrape together five million and give it to her in cash if she would come back. That’s how much I miss her.” ♦