Last Night I Dreamt That Somebody Loved Me 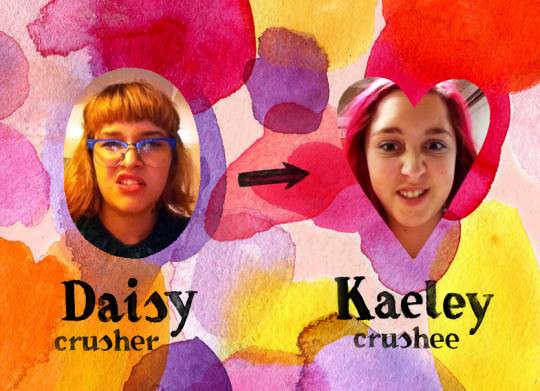 Daisy and Kaeley build glittery shrines and are Nerdfighters together in the San Francisco Bay area. They’re both 14, they’re both Leos, and they’re both adorable.

Kaeley and I have been friends since sixth grade. She is a super cute, groovy gal. She’s also my almost twin—our birthdays are 11 days apart (she’s older), and we always do or say things in unison without planning to.

We’ve stuck together through thick and thin, various band obsessions, and major boy crushes. Now we’re in our first year of high school, but at two different schools that are an hour-and-a-half bus ride apart. I’m at an art school, and she’s in public school. Even though we don’t see each other during the week, we still hang out on the weekend and make crafts and eat In-N-Out cheeseburgers.

ROOKIE: Did you and Kaeley go to the same school before this year?

DAISY [crusher]: Yeah, we were best friends all throughout middle school, and then when we went to different places for high school, it was like she was absent every day. You know when your best friend’s absent and you don’t know what to do with yourself? Except she was absent all the time. It was so sad.

How are you guys coping with being apart?

We send each other awkward selfies and text about stupid things. And we always hang out every weekend. 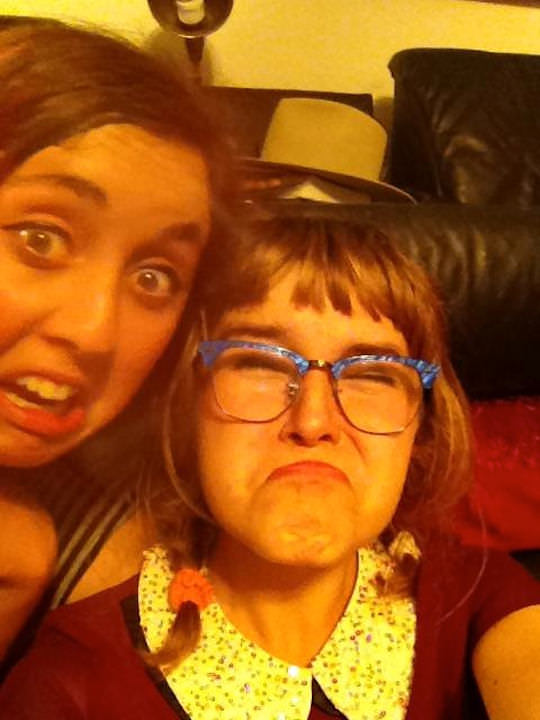 Daisy: “We take a lot of unattractive selfies together.”

What did you guys do for Valentine’s Day?

Within a minute, we both sent each other the exact same Kanye West valentine. We just, like, telepath-ed each other. We were on the same wavelength. It was weird.

What did it say?

“I love you as much as Kanye loves Kanye.” 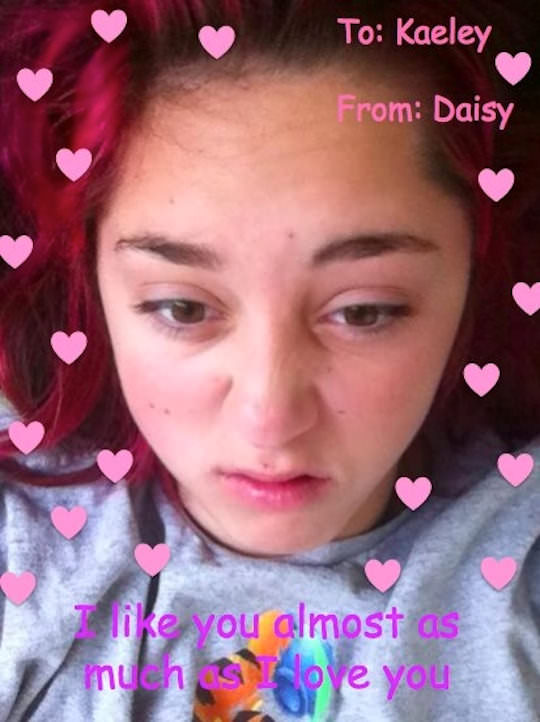 These valentines are all ones that Daisy gave Kaeley this year.

You sent us a Grimes valentine that you made for Kaeley this month, and another really sweet and cute one that said, “I like you almost as much as I love you.” What did you mean by that?

She’s just my best friend. And I love her. And on Valentine’s Day everyone should know that they’re loved.

What’s the weirdest craft you’ve ever made for Kaeley?

Kaeley is obsessed with Beyoncé, so I made her a purple—that’s her favorite color—glittery Beyoncé shrine. It’s different layers of paper and cardboard and stuff. It’s just cool and glittery and Beyoncé-like. And she hung it on her wall.

Has she ever made you anything?

Yes, she made me a Tilda Swinton shrine. There’s this museum in San Francisco where they show cool old movies, and we saw Orlando, which she starred in. We got kind of obsessed with her.

So, out of all the people in the world, why do you think Kaeley became your best friend?

Kaeley is my best friend because we’re just too weird. We do things that other people just don’t understand.

Like we have matching sweaters that are really stupid and ugly but we think they’re great. They’re big and fluffy and bright pink and bright turquoise. We wear them on the same day. People don’t know it, but we know it, because we’re in different schools.

You mentioned you guys are like twins. Is that kind of what you’re talking about?

We’re like the twins from The Shining, basically. We dress alike. And think alike. We’re less frightening, though. And cuter than that, I would hope.

If there were one thing you wish other people could know about Kaeley that they don’t already know, what would it be?

Oh my goodness. There are so many things. She’s just so fabulous. And so classy. And so smart. She’s just too perfect and so cool. 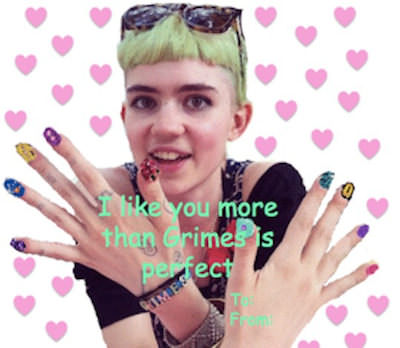 She’s unique and not afraid to be herself. At least not around me. She’s very confident, and she has her own style. She wears little skirts and buttondown shirts that have patterns on them. And tights and socks and really cute oxfords. Everything about her is adorableness. And she’s very, very talented at lots of arts and crafts. She’s much better than me.

She said she made you a Beyoncé shrine. But she told me you made her a Tilda Swinton shrine. What is it like?

It says “Oh! Tilda” on it, like “Oh! Darling” by the Beatles because we had been singing that song all weekend. 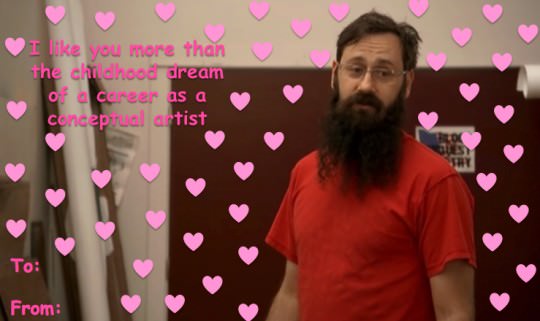 What’s something she’s made for you, other than the shrine, that you think is completely amazing?

All sorts of things. What I’m looking at right now is this really cute drawing she did. It’s a monster wearing overalls, and it has Converse and balloons. It was my birthday card.

What did you do for her birthday?

We went to a food truck festival in San Francisco, and then we got bread at this really amazing place as her cake because Daisy doesn’t like cake. 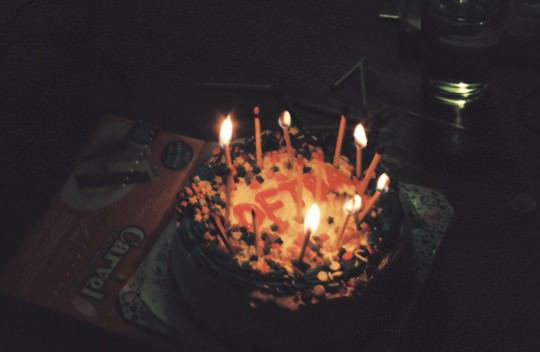 Daisy: “This is a Nerdfighter-themed cake I decorated for Kaeley’s 14th birthday. I forgot candles, so I had to use matches.”

I just go on the internet and hang out with my friends.

I’m guessing you’re making your own separate sets of friends. What’s that been like?

Well, we have a lot of the same friends because I go to the local high school where she would have gone. And a lot of my friends from middle school are still my friends. But I’ve made friends with some of her friends, too, because she brings me with her whenever she hangs out with them.

If you built a shrine to Daisy, what would it have on it?

It would be very, very glittery. ♦

To nominate your own Friend Crush, send us an email telling us what your intense crush feelings about her are based on. Be sure to include a few things: (1) a big, clear photo of you, (2) a big, clear photo of her, (3) both of your names and ages, (4) the best way to get in touch with each of you. Please use the subject line “Friend Crush,” and send the email to [email protected] ONLY ONE TIME. Thanks!