Aunt Debbie and Uncle Mitch share their thoughts and emojis. 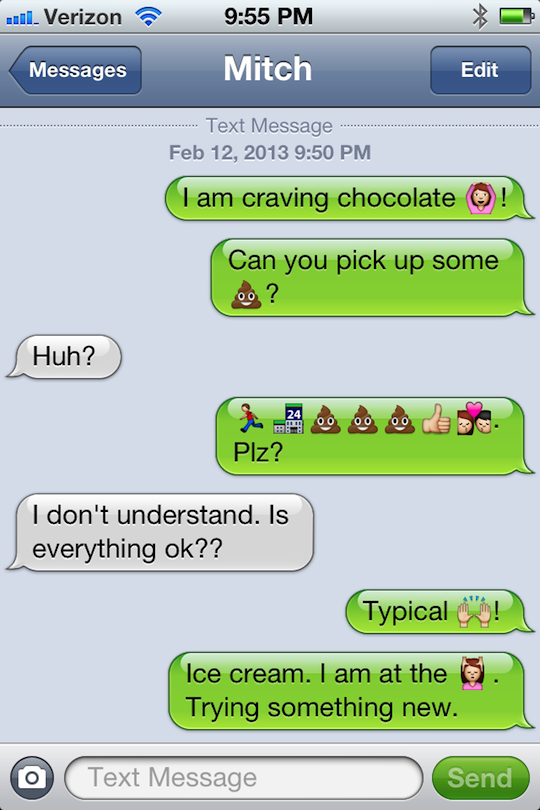 My Aunt Debbie and Uncle Mitch are the greatest, and I love them. They love me too, as evidenced by this recent round of emails.

12/12/12
Darling Evie,
Did you notice the date? How weird is that? I can’t believe there are only nine more days until the world ends! LOL! I hope not, because there’s always great sales at Jeanne’s House of Cards after the holidays.
I just adore this season, don’t you? Josh Groban is so dreamy, and when he starts singing Christmas carols, hoo boy! And it’s the only time of year when it’s socially acceptable to drink eggnog every day. Yum-o, as Rachael Ray would say! Uncle Mitch—or should I say Uncle Grinch? LOL—doesn’t seem to have the holiday spirit this year. I’d give him coal, but I tried that a few years back and he said it was the most metal gift he’s ever gotten. Typical Mitch! As usual, I’m a Last Minute Sally with my shopping, so if you have any hints to drop, I’ll make sure to pass them along to Santa’s elves, wink wink.
Fa la la la la la la la la,
Auntie Deb

12/17/12
E/V,
The reason I don’t have any “holiday spirit” is because your aunt has once again gone way overboard with hers. She’s always listening to that channel that ONLY plays Christmas songs from Thanksgiving to New Year’s Eve. If I hear Josh Groban sing “O Holy Night” one more time, I may just fall on MY knees (outside of his mansion, where I can beg him to stop). Oh, and remember the pumpkin ham incident? Well, last night for dinner, she made fettuccine Alfredo, only instead of sauce she used eggnog. It was the absolute worst thing I’ve ever put in my mouth, and I once ate cat food on a dare in seventh grade.
Feck the Halls,
M.
P.S. Cat food is horrible, by the way. Never accept that dare, even though it looks OK when the Fancy Feast cat eats it. Who does that cat think he is, anyway, eating out of a crystal goblet?

12/24/12
Darling Christmas Evie (LOL!),
Can’t wait to see you tomorrow. Please tell your mom that I won’t be bringing my famous Egguccine as planned, because it turns out that your Uncle Mitch is allergic to eggnog. His arms broke out in a rather unpleasant rash. Poor thing. No wonder he’s been such a grinch!
In happier news, it seems like Princess Kate is on the mend. I still can’t believe there’s going to be a Royal Baby! Their lives are like a fairy tale, minus those dirty pictures of Prince Harry. I can’t even imagine what the Queen had to say about that, but I think Helen Mirren would find it pretty funny!
Joy to the World,
Your Aunt Debbie

12/24/12
E.—
Corn syrup and oatmeal, mostly. I used to know this guy named Pete who played bass for the Crumbling Ghouls when I worked at the Spleen, and I helped him apply his festering wounds before every show.
M.

12/27/12
Darling Evie,
Have you seen any of the holiday blockbusters yet? Mitch took me to see Les Miserables, which was so sad and wonderful. That Anne Holloway deserves an Oscar for messing up her teeth so badly. Her dentist must have been furious. Mine gets shirty when I forget to floss.
Love you,
Auntie D.

12/28/12
Evie,
I hear you’re going to a big party on New Year’s Eve. A bit of advice: don’t drink. If you drink, don’t drink and drive, don’t drink too much, and don’t drink that crap that’s banned in five countries that I know your neighbor Elliot still has three cases of. It’s basically gasoline and lemonade. (Stay away from that Elliot in general. Pretty sure he ate too much paste in kindergarten.) Also, don’t hang out with the stoners when the ball drops unless you want to hear a million deep thoughts about time, man. And bail if the music is garbage. Make sure you have money and access to pizza. And if you need a resolution, you can borrow the one I’ve been using since the dawn of time: “I’m going to rock forever.” Haven’t broken it yet.
For Those About to Rock Forever, I Salute You,
M.
P.S. That Les Miserables wasn’t bad, but when I dream a dream, it’s a lot shorter than THREE HOURS. Jesus.

1/3/13
Darling Evie,
Did you see today’s date? AGAIN? How cool is that? My friend Carolyn pointed it out to me and we both agreed that it’s “the bomb dot com.” Can you believe that Khloe Kardashian is having a baby with Kanye West? Holy macaroni! I don’t watch her show, and I don’t know much about his music, though I do like the song that goes, “Nowhere Man should have all that power!” (Is Nowhere Man one of those Avengers? Or an X-Man? I can’t keep up with all of these superheroes.) But he should have let Taylor Swift finish talking. It’s rude to interrupt, and for the record, if anyone has the best video of all time, it’s Celine Dion. Have you seen “It’s All Coming Back to Me Now“?
How is the New Year treating you? I’m trying my best to stick to my resolutions, which are to be more adventurous, get organized, and give raisins a fair chance. I have a hair appointment this afternoon and I think I may just go wild! #YOLO! (Right?)
Love and hugs,
Auntie D.

1/5/13
Dear Evie,
It’s Kim, not Khloe? I literally can’t keep up with those Kardashians! They have me all konfused. (LOL!) What would I do without you? Speaking of, thank you for showing me how to send those little pictures on my phone! I love the chocolate ice cream one with the little face. You know how much I love chocolate! Except Raisinets. (I’m sorry, raisins. I tried.)
Oh, and you are going to flip your lid when you see my new ’do. It’s stylin’ and profilin’, as I heard someone on television say once. What a riot!
Miss you much,
Auntie D.

1/5/13
Evelyn,
It’s like maroon with blonde and black stripes. I can’t decide if it’s the greatest or worst hair color of all time. I will say one thing, though: she is killing it in the New Year’s resolution department.
She’s a Rainbow,
M.
P.S. Is there a reason why your aunt texted me three pieces of smiling poop when I asked her if she needed anything from the store? I assume you have something to do with this.

1/14/13
Dearest Evie,
Did you watch the Golden Globes last night? I thought Amy and Tina were hysterical. Apparently Girls is the new big show. Would I be into it? Is it like Sex and the City? I loved that show when it was on TBS. I’m such a Carrie! But I don’t smoke or care about shoes.
I have to say, I’ve been getting all kinds of comments on my new look! Most have been positive, although Helen from the book club said it was “a bit much.” Oh, well. That’s Helen for you! She’s never down with the new hip styles, like the Rachel and the Kate Gosselin. I bet she doesn’t even know what YOLO means.
What’s up with you!? Let me know, Jell-O!
Love,
Your Aunt Deb

1/20/13
Dearest Evie,
I’m glad to hear that school is going well. I saw a bunch of Valentine’s Day goodies in Pathmark today—do you have a sweetie this year? If not, that’s OK. You can always celebrate with your friends. Uncle Mitch and I try to go out every Valentine’s Day, but this year he has to work. Can you believe it? Oh well. There’s always next year (if Uncle Mitch plays his cards right, LOL!).
Love,
Auntie Deb
P.S. My hip new hair is gone! The colors sort of ran together and ended up looking like an Easter egg after you dip it in too many cups of color, ya know? At least I gave it a go!

1/25/13
Evie Nicks,
I kind of miss the wild hair, man! Especially the looks we’d get at T.G.I. Fridays. I told the manager that she was Lady Gaga’s aunt, and he hooked us up with free potato skins. Nice, right?
Your mom sold you out and told us you’re going to the Valentine’s Day dance. Your aunt is coming to see you that night, and she keeps asking me about Instagram. There’s only so long I can pretend I don’t know what she’s talking about. Consider yourself warned! Keep up the ruse about my late shift on the 14th, OK?
Rock & Roll All Night/Party Every Day,
M.
P.S. You are way cooler than Lady Gaga.

1/26/13
Darling Evie,
So bummed I can’t get an Instagram! I didn’t know it only worked on special phones from that one remote area in Japan. Technology is amazing! But don’t worry, I’ll make sure all of your dance pics are uploaded to Facebook, so all of the family can see!
Love,
Auntie Deb
P.S. Do you think Harry and Taylor will ever get back together? When will that poor girl find love?

2/9/13
Darling Evie,
You looked so beautiful last night! Sorry about temporarily blinding you on your way out the door. Hope you were able to see by the time you got to the dance. Did they play that new song by Justin Timberland about wearing a suit and a tie? I like that song. Dressing well is important. Your uncle says “suits are for suits.” Typical Mitch! What else are you listening to these days? Keep me in the loop, hula hoop!
Love and kisses,
Auntie D.
P.S. The Fall Out Boys are back together! You used to like the one with the hair stuck to his forehead, right? Let me know, we’ll try to get tickets!

2/12/13
Evelyn,
Thanks for sending your aunt that “Thrift Shop” song. She won’t stop singing it. She also went to the thrift shop that just opened and bought about 900 things she doesn’t need. Our house looks like Hoarders: The Beginning.
Metal Health Will Drive You Mad,
M.

2/14/13
Dearest Evie!
You won’t believe what your Uncle Mitch did tonight! He told me he was going to work, and then returned 20 minutes later in A LIMOUSINE! Couldn’t you just die?! I put on my best dress and Mitch—MITCH—put on a real suit and tie, just like Justin Timberland! We went out to dinner at Le Jardin, and now we’re off for some dancing. I’m sending you this email from my phone IN the limousine! It has Wi-Fi! The future is now! I hope your uncle likes his gift—I got it at Yesterday’s Treasures.
XOXO,
Auntie D.

2/14/13
Evie Ray Vaughn,
It’s a vintage Floyd T-shirt. Probably 35 years old, perfectly soft, A+ condition. I take back everything I said about the thrift shop. It RULES.
Rock & Roll Ain’t Noise Pollution,
M.
P.S. If you see the most badass couple on earth cruising down the street in a limo tonight, IT’S US.