Dedicated to the One I Love

The song that saved my life. 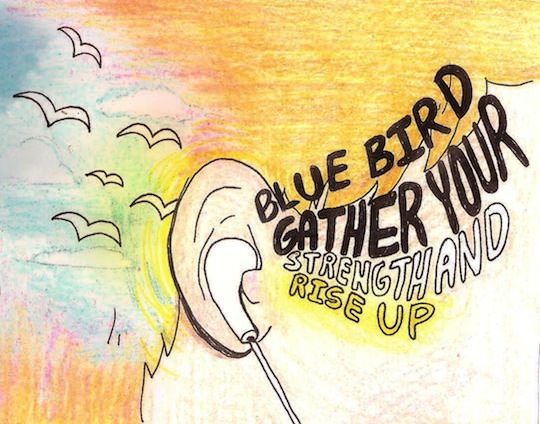 I started humming “Twinkle Twinkle Little Star” before I could even speak, and I spent most of my toddlerhood next to the stereo wearing enormous headphones and listening to Stevie Wonder, Michael Jackson, Elton John, and Billy Joel. As a kid, I never went anywhere without my Walkman, and the only difference today is that it’s an iPod. I played every instrument I could get my hands on. I was the first person in the history of my middle school to sing in the Florida All-State Chorus, and by the time I graduated from high school, I had performed 1,000 hours of community service by singing at local charity events. Basically, music has been the one constant in my life, and my primary source of solace and escape.

About two years ago, during my sophomore year of college, I started to figure out that I was a guy, a fact that I had kind of known all along, but since I was born with a vagina, I was struggling to explain it to other people. I felt scared, confused, and severely depressed. Around the same time, Sara Bareilles released her second album, Kaleidoscope Heart. I’d been hooked on Sara since 2007, when “Love Song” was iTunes’ free single of the week, so I was ecstatic to hear her new music. I had no idea that it would change my life.

The final track—my lucky number, 13—was “Bluebird,” a soulful piano ballad about a breakup:

Word came through in a letter
One of us changing our minds
You won’t need to guess who
Since I usually do / Not send letters to me
That are mine.

I’d never been in a romantic relationship, but her phrasing hit me right in the gut. I was trying to define myself in a way that everyone would understand, and I had trouble finding the words. Most people don’t know what transgender means, let alone what it’s like to be trans*. I was worried that my friends would isolate me even more than I’d already isolated myself, and I imagined being on the receiving end of a similar letter, and what my response would be.

I told him I saw this coming
That I’d practically packed up my things
I was glad at the time
That I said I was fineBut all honesty knows
I wasn’t ready, no.

I did my best to prepare for the fallout. I knew not everyone would accept my decision to transition (i.e., make outward appearance and my life match who I was inside), and I wasn’t ready to face rejection, but sitting on the corner of my bed in my bleak dorm room listening to Sara on my laptop, I realized I had to do something to change my life.

And so, here we go, bluebird
Back to the sky on your own
Oh, let him go, bluebird
Ready to fly, you and I
Here we go.

By the time I finished the chorus, I decided that whatever anyone else said to me didn’t matter, because I had myself, and in many ways, I had been my own best friend for my entire life. I made other friends easily, but I always felt so different from everyone around me that it was rare for me to forge deep connections with them. The song reminded me of this, and reassured me that I could get through anything, even if in the worst case scenario I had to pack up my things, move on, and start a completely new life.

When I started to come out later that month, I was incredibly lucky to receive the support that I did, but I lost all of my childhood friends. Some were angry with me for not telling them sooner. Some doubted my new identity, since I hadn’t identified as trans* as a kid. Others sent me Facebook messages telling me that I was doing something wrong, and/or that God intended me to be a woman. With “Bluebird” on repeat—I listened to it something like 60 times within the first month of buying the album—I decided to accept the fact that I would have to say goodbye to people who had been important to me and move forward.

And so here we go, bluebird
Gather your strength and rise up.

I was still depressed, anxious, and afraid, but every time I heard the song, it gave me hope that if I made it through this rough patch, I’d come out stronger.

This wasn’t the first time music saved me. The Spring Awakening soundtrack got me through high school. I would walk through the halls at 6 AM blasting “Totally Fucked” on my iPod, hating the world for making me get up at such a god-awful hour only to be stuck in a miserable environment. It made me feel less alone. But “Bluebird” reminded me that I could actually be alone and be OK.

The following month, Sara Bareilles’s tour came to Nashville. The concert blew me away: I loved her impromptu a cappella cover of Radiohead’s “(Nice Dream)” and the audience participation during “Love Song.” And every time she sat at the piano, my stomach seized with anticipation, but she never played my favorite song. Nonetheless, I was determined to meet Sara after the show. I ran to the stage door so I could be the first in line. The friends I was with left after about 45 minutes, as did most of the crowd, but I waited for an hour and a half. When Sara came outside, she walked right up to me, assuming I wanted an autograph. I told her how amazing the show was, and then said, “‘Bluebird’ is my favorite song, and I was wondering if you’d sing it with me?” She looked hesitant, but she said, “OK, you start, and I’ll join in,” and started signing the poster I’d bought at the show. After my first line, she stopped writing and looked up. I think she was shocked that I could actually sing. She came in on the second line, and we sang the first half of the first verse in harmony—I still get giddy when I think that Sara Bareilles harmonized to her own song while I sang the melody. (If we were Destiny’s Child, I would basically be Beyoncé in this moment.) Sara looked into my eyes the whole time; it was one of the greatest moments of my entire life. When we were finished, she hugged me and told me I had an amazing voice. We talked for a few minutes about music—I didn’t tell her about what that was going on or why the song was so important to me, but I think the emotion I felt while singing expressed what I wanted to.

I spent the entire weekend on cloud nine, which I remember because it was the only break I had from my depression that year. The song had new meaning now; I associated it with happiness and encouragement. About six months later, I decided I wanted to commemorate that night with a tattoo of a small bluebird behind my right ear. Right before I went to the tattoo parlor, I found out that Sara had just gotten a flock of birds tattooed behind one of her ears, and I knew it was the right decision. I typically don’t remember the tattoo until someone reminds me, just like I don’t remember how much strength and perseverance it took to get through the worst year of my life, when I found it impossible to drag myself out of bed or even smile, until I remember how far I’ve come.

These days I feel more comfortable with myself. I’m not constantly defending my decisions or trying to make the people around me OK with who I am—I’m just living my life. I still listen “Bluebird”—maybe not as often (though I played it a lot while working on this piece). I never tire of it, because it’s like an old friend, one that was there for me during a really difficult time, and for that I’m more grateful to Sara Bareilles than she will ever know. ♦