Crafting for Your Crush 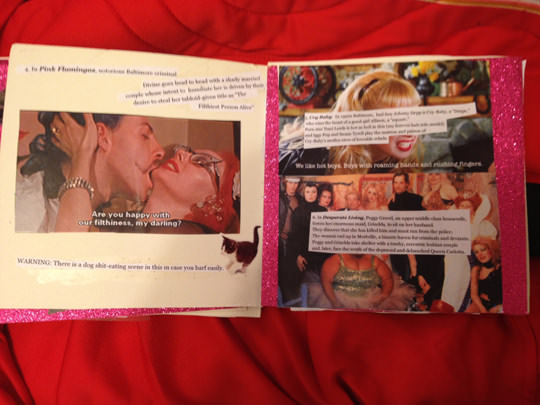 Recently, I met a cool dude who hadn’t watched any Uncle John Waters movies, EVER. I know, I know. You’d think that would have been a deal breaker or whatever, but I thought he was pretty SPESH regardless, so I told him I’d write down a list of movies for him to watch. He asked if I could mail the list to him. Say what? First of all, how dare you!? Second, you better be careful what you wish for, young mangs, because you obviously don’t know who you are messing with here. I considered this a personal challenge. A craft challenge. [Flexes muscles while holding glue gun.] I knew this list was going to be collage-based (my specialty), but while in the midst of collecting my materials, a light bulb went off and I decided to turn it into a little book!

Maybe you want to do the same. First, as always, you will need a theme. Ask yourself: Will this book be a collection of things that you both like? Are you schooling your crush on something you think they’d be into, like I did? Or are you honoring their obsessions with cryptozoology, Carl Sagan, or Bruce Springsteen? My friend came up with a really unique idea for her then-crush, now beau, and made him a “mix book,” which was like a mixtape, but instead of songs, she took passages from her favorite books and collaged them together. BRILLIANT! 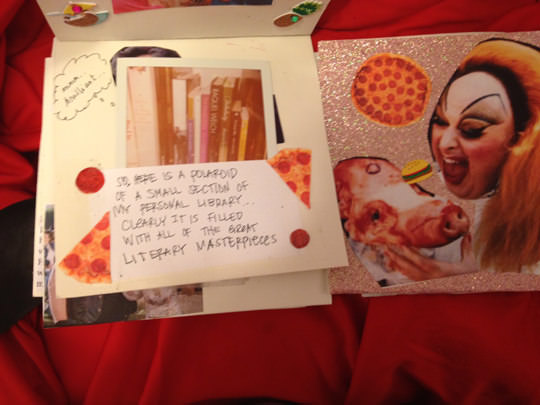 OK, on the crafting: 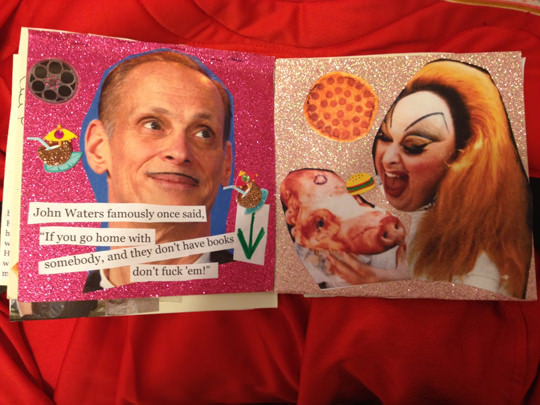 1. Gather and customize your materials. I wrote descriptions for each John Waters film in my own words, and I dug up one hilarious review that describes a part of the plot of Polyester thusly: “Her son is suspected of being the foot fetishist who’s been breaking local women’s feet.” Then I printed stills or screen shots from each movie that I wanted to include, which were pretty much the ones in this box set. (I skipped Mondo Trasho and Multiple Maniacs, because I figured those were less accessible.) This is kind of the most fun part. I think rare images or more animated photos—ones with funny poses and such—make the best choices, because they give you something to play with. 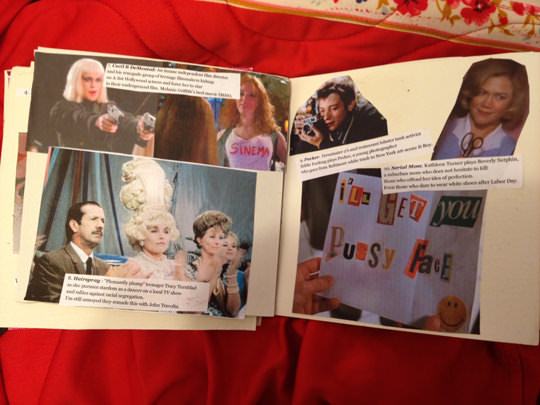 2. You don’t have to, but I cut the paper in half, because my glitter paper was extra big, and it would have looked like I was turning in an essay. Plus, little things are cuter. 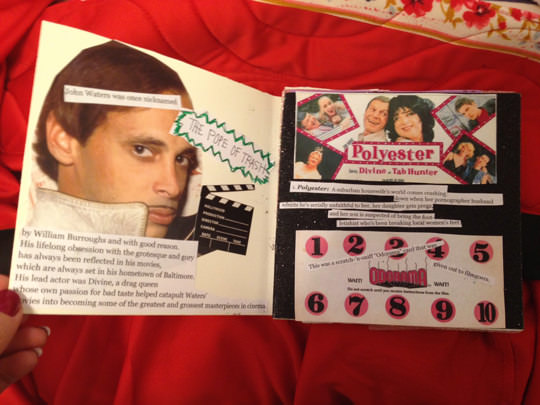 3. Start laying things out. I usually like to have a general idea of how it’s going to look, so I arrange them on the page before gluing anything. My only guiding principle here was to put the movies in order of what I thought he should watch first. I started with Polyester, because I saw it in high school and it ignited my obsession; plus, I thought it was edgier than Cry-Baby or Hairspray, and would appeal to his dark sense of humor. Big mistake! This was the title he was least interested in (maybe it had something to do with the foot-breaking). But we watched A Dirty Shame, which I had ranked second, and he loved it. Anyway, once you’re ready, glue your li’l corazón out. 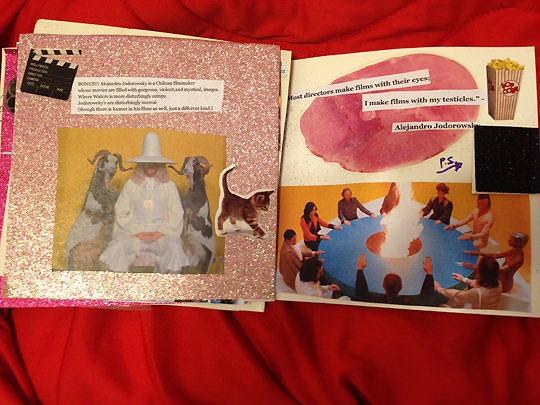 4. Throw in a WILD CARD! I made a special page at the end about my other favorite director, Alejandro Jodorowsky, who made these beautifully insane surrealist films in the ’70s—my favorite, The Holy Mountain, is about a man on a bizarre journey who meets a group of really rich and powerful weirdos, and they trek to this mountain to become immortal. I figured he’d probably be into his movies as well. If this were a mixtape, this page would be the secret surprise song. 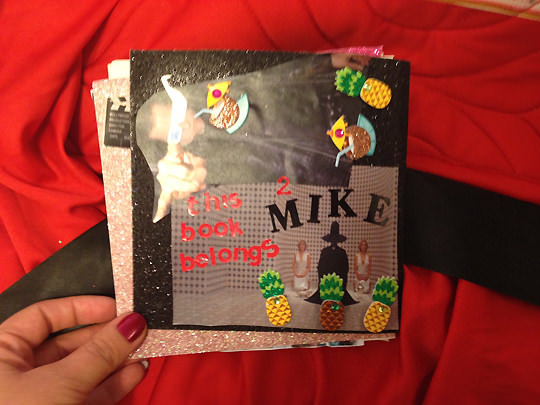 5. Add some personal touches. I always have letter stickers handy, so I did a “this book belongs to” part on the back cover, and also included some cat stickers, because he likes cats, and everyone likes it when you acknowledge what they like. 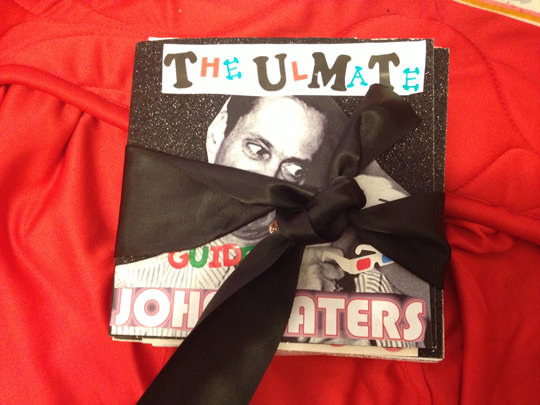 6. Fasten the book together! My pages ended up being too thick to staple, so I kept them loose and tied the whole thing together with a thick piece of black ribbon. You can also punch holes and insert ribbons for binding. 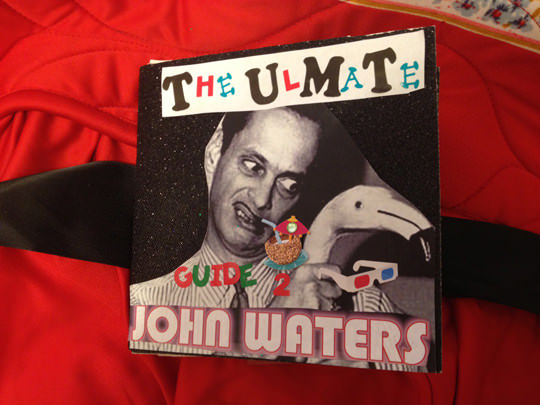 7. Proofread your work! I didn’t realize that I’d forgotten to glue the T and the I to the title on the front cover until I was on my way to the post office. This ain’t amateur hour, Rie! Luckily, my hawk-eye spotted it right as I was putting it in the envelope, and I fixed it with a pen. (Which is another part of this tutorial—things don’t have to be perfect.) So from there, the book went RIGHT INTO THE HANDS OF MY CRUSH. Eeeek!

Some of you may wonder: did it ever occur to me that perhaps creating some elaborate ~special arts~ might instill fear in my crush, and how it could be thought of as similar to the meticulous work of a serial killer who covers their basement walls in newspaper clippings? MOS DEF! But wouldn’t you love to get something like this? From me especially?? And since you are all wondering, yes, he really liked it! But even if he ran out the door, never to be seen again, that’s just the risk you gotta take. Life is too short not to craft 4 UR crush. ♦