Except when they do. 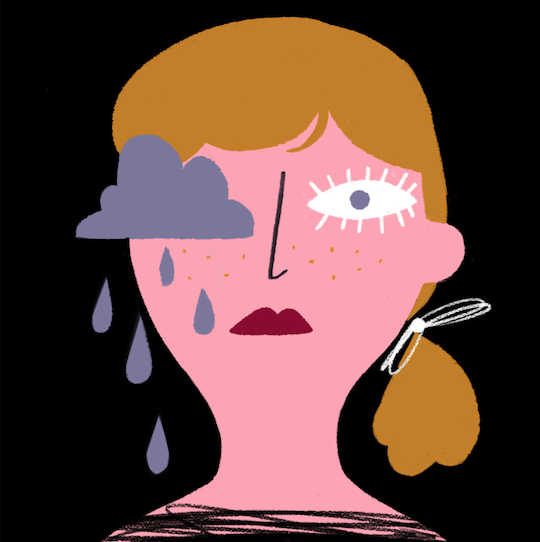 I don’t cry. I mean, I’m physically capable of it: my tear ducts can produce secretions that have, on occasion, fallen from my eyeballs. But I’ll go to great lengths to prevent that from happening. I’m the queen of fighting back tears, whether they’re “watching Sophie’s Choice” tears or “someone just told me to projectile vomit onto my reflection in the mirror” tears (both examples are based on true events). No matter how justified these teeny-tiny droplets are, I’m not into them, and I’m definitely not into anybody else witnessing them.

When I watched my family put my dog Nigel to sleep, I didn’t cry—not that whole day, nor the day after. Crying wouldn’t bring my dog back. I loved him obsessively for 13 years—anyone who knows me has seen my photos of him wearing several different hats, and why he had so many, I don’t even know—but for some reason I was ashamed to really, truly let my anguish out, especially in front of anybody else.

When I see someone crying, I think, They can’t control their emotions. I assume they have failed to exert their will over their impulses, and that they must cry all the time if they’re crying here in this food court/car/in front of me, and that makes them seem weak and vulnerable, and that makes me uncomfortable, which makes me terrible at comforting others in distress. I don’t know what to do with myself; the thought of consoling them doesn’t even enter my mind. I feel like I’m intruding on something that should be private, and I want to run.

On the rare occasion when I cannot help crying, I do it alone. I don’t want to be seen or comforted; I don’t even want anyone to know that I’m crying. When I feel my eyes tear up in public, I feel ashamed, like I’m playing into some of the worst sexist stereotypes: that I’m weak, emotional, “too sensitive.” I don’t want to be those things. I want to be stoic. Did Susan B. Anthony cry because she couldn’t vote? Did Rosa Parks cry because she couldn’t sit in the front of the bus? It doesn’t sound like it. They acted, instead of just emoting. I can’t remember ever having seen Hillary Clinton cry, but when she does, entire articles are written about it. I’m not Hillary Clinton (duh), but I get the message: to be taken seriously you have to be serious. You know how in A League of Their Own Tom Hanks yells, “THERE’S NO CRYING IN BASEBALL”? Well, I think there’s no crying in life.

Only there is. During my first semester of college in New York City, I went through a tough period that I’m pretty sure every student experiences. I missed my family. I was stressed out about keeping up with a tougher course load and my extracurriculars. I started to doubt my abilities as a writer, and began to hate everything in my life. I also felt like the loneliest person in a city full of people. But I didn’t think any of this was reasonable. I was privileged enough to attend a great school. I had fantastic friends. My problems were trivial in the scheme of things. Yet I had these feeeeelings, and they caused a mixture of water, oil, and proteins to pool around my eyes.

One afternoon, after a pity party of a day, I went to Central Park to clear my head. I had just taken a midterm exam that I thought I failed even though I had studied very hard. I felt like a failure in every respect—all I could think about were my many flaws—and I started bawling. I hid under a big pine tree for privacy, and I hugged the trunk of that tree and just let it out. At first, I chastised myself for acting like a baby, but then I realized something: it felt good. I didn’t care if that toddler was staring at me. I needed this, and it was happening whether I liked it or not. I went back to my dorm feeling so much better; suddenly a botched midterm didn’t seem like the end of the world.

I read somewhere that you become a New Yorker after you’ve cried on the subway. Well, I am a New Yorker a bajillion times over. After that day in Central Park, I cried on the G train, I cried in restaurants, I cried in elevators, I cried in H&M. Each time it was the result of an overwhelming combination of anxiety about my schoolwork and estrangement from my peers. I didn’t get along amazingly well with my roommates, and I wasn’t connecting with anyone else at college. On top of all that, being in the city made me feel even more isolated, because everyone seemed to be doing everything without me. It was around this time that—swear to god—I bought a handkerchief. And every time I cried, I felt better. Crying, I finally figured out, doesn’t need 100 heartbreaking justifications—it’s OK to do it just because you feel like it. I’d been so caught up in what I thought other people would think of me that I wouldn’t grant myself any release from my sorrow. I was keeping everything inside, and it wasn’t good.

I still have to remind myself that it’s OK to cry, and there are still places that I don’t think would welcome my tears. I hope never to cry in class or at work, because I worry my credibility would suffer. I still believe that self-control is important, and that a thick skin is valuable in most situations. But I can’t be afraid to express my sadness in public just because people are sexists. And I’m not a traitor to feminism if I weep after watching the Christian the Lion video. I mean, have you seen it? Don’t worry, you can borrow my handkerchief. ♦