A Name I Call Myself

Changing my name seemed like a good idea at the time. 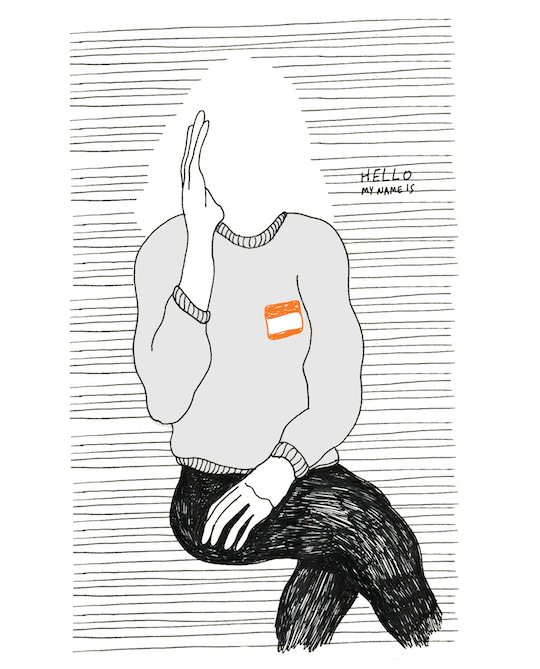 My name is not Phoebe. Phoebe is what most of my closest friends, all of my employers, and a lot of my family members call me, but it isn’t my real name. I changed it—not legally, but for all intents and purposes, permanently—when I was 17. My real name is Tricia. It isn’t Patricia, which was a common mistake among neighbors, who unfortunately took the liberty of shortening it to Patty or Pat. Just Tricia, which struck me as profoundly uninspired. I hated it. It seemed too cute for the person I saw myself as at the time. It lacked the lovely simplicity of Kate, of whom I knew many, or the uniqueness of a name like Cecilia, my best friend at the time. Growing up, I signed birthday and holiday cards to my relatives with all sorts of pseudonyms—Laura Beth, Caitlin, Jessica, Desiree; I couldn’t decide which I liked best.

My name was wrong in the same ways I thought I was wrong. I wanted to see myself as the protagonist of a story, which meant, according to the books and TV shows I was consuming, pretty, like blond Carol Anne in Poltergeist, and able to ride a horse, like Laura in Little House on the Prairie. I didn’t feel like I had the distinguishing talent and beauty of a heroine or a celebrity, roles I mixed up to mean the same thing. I yearned for a good singing voice or green eyes or even nice penmanship—something that would make me stand out, whether in a crowd on the schoolyard or just to myself when I gazed at my homework, where I saw my messy, inconsistent handwriting wrecking the pristine beauty of the paper (I was kind of an anal kid). I felt I possessed nothing remarkable, nothing that I really appreciated, and my name seemed to announce how average I was. Nobody would write a song about a Tricia (but an Australian band called the Cat’s Miaow would later write one about a Phoebe). The only memory I have of a character with my given name was in Christopher Pike’s paranormal suspense book Remember Me, which I loved so much I read it five times, each time saddened by Tricia’s inconsequential status—a cheerleader at a party. (Shari, the late main character, became my preferred name in eighth grade; I used it to sign notes to Cecilia.)

I convinced myself that Tricia was holding me back from greatness, which in my mind wasn’t so much earned as it was granted: a cool name gave you confidence, which fostered your talent, which led to your fame, which guaranteed your name made history. Evander Holyfield was clearly born to be legendary. Ford Madox Ford and Rooney Mara chose wisely. (Rooney’s real name? Patricia.) Celebrities aggressively nurture the this idea, and thus Hershslag becomes Portman, Caryn becomes Whoopi, Myra becomes Tori, until, in the end, there is not only a purging of ethnicity, but a perfectly bite-size, mysterious, mellifluous, or otherwise iconic-sounding invention. And it makes some sense. The Girl With the Dragon Tattoo starring Trish Mara? I’m not intrigued. What was my mother thinking?

She was thinking she wanted to name me Bridget, after her mother, but my grandmother forbade it because she hated her own name. It turns out I come from a long line of own-name-haters; my mother is equally unhappy with hers, so Eileen was ruled out as well. She liked Tricia because it complimented my generic middle name—Anne, after my aunt—and there wasn’t much more to it than that. I first came across the name Phoebe the summer after my freshman year of high school. I read The Catcher in the Rye, and I actually didn’t love the book as much as I thought I would. Maybe I didn’t understand phoniness or Holden Caulfield’s big problem with it yet. I only picked it up because Winona Ryder (née Horowitz) said it was her favorite. But in the course of reading it, Holden sounded pretty crush-worthy, not only because of his great name, but also because he held few people in as high esteem as his sister, “old Phoebe.” I was an only child who had always longed for an older brother, one I imagined would secretly care about me more than anyone else and be fiercely protective of me. (Oddly, I also pictured River Phoenix or other older boys I had a crush on in this role, so I might have been confused about what exactly I was pining for.) But after reading the book, I basically wanted to be Phoebe, this girl who was so admired by Holden. I had never heard the name before (Friends was on, but I wasn’t watching it at the time), and it was unlike anything my parents would have ever chosen. I loved the phonetics of it, that it was the name of one of Saturn’s moons (celestial symbolism!), that I had never met a single other Phoebe, as opposed to the two Tricias in my graduating class of 36.

Phoebe sounded far more special than Tricia did. Tricia wore roll-neck, cable-knit sweaters, like everybody else in her Catholic school. She went to a psychic on Halloween during her sophomore year only to be told she would not get a boyfriend that year. (Any psychic willing to give bad news like that had to be the real deal, and sure enough, her prediction came true for the remainder of high school.) Tricia was the nerd who went up to popular girls and asked them what was, by the looks they exchanged, lame questions like “What are you wearing to the dance on Friday, because I’m going shopping with my mom?” I saw my awkwardness and decided I wanted to be somebody different—but different in a way I could control as opposed to different because of complicated reasons like why I thought I was so unattractive and why I never had a date to any of those dances.

I tested out the name Phoebe in my junior year of high school, when I signed up for AOL. Scared into protecting my privacy by some alarmist stories of internet predators, but mostly just titillated by the idea of adopting a new identity, I introduced myself as Phoebe in chatrooms and in a profile to which I gave slavish consideration. I was forever learning, from other equally packed profiles, about bands that were not Dave Matthews or the Grateful Dead or other artists that everyone I knew listened to, and updating my own list of favorite things, trying to squeeze in every last name that would fit within the character limitations—who was more essential, Slant 6 or Tuscadero? I eventually met up with other teenagers, we went to Sleater-Kinney shows together, and as far as they knew, I had always been a fan of Parker Posey, and never Julia Roberts. This mythology was incredibly empowering. I felt symbolically reborn as the cool person that I wanted to be. I now didn’t care what anybody else was wearing to anything, because I probably wasn’t going to be caught dead in something like it anyway. I put a pink streak in my hair and got an eyebrow piercing—I felt like a rebel, even though I was terrified of any actual rebellion (I had college applications to consider) and I still went shopping with my mom (just to other stores). I wasn’t going by Phoebe full-time yet, but her existence online and on weekends at concerts made me feel like I was shedding the parts of myself that I disliked, and inventing a new, more interesting me.