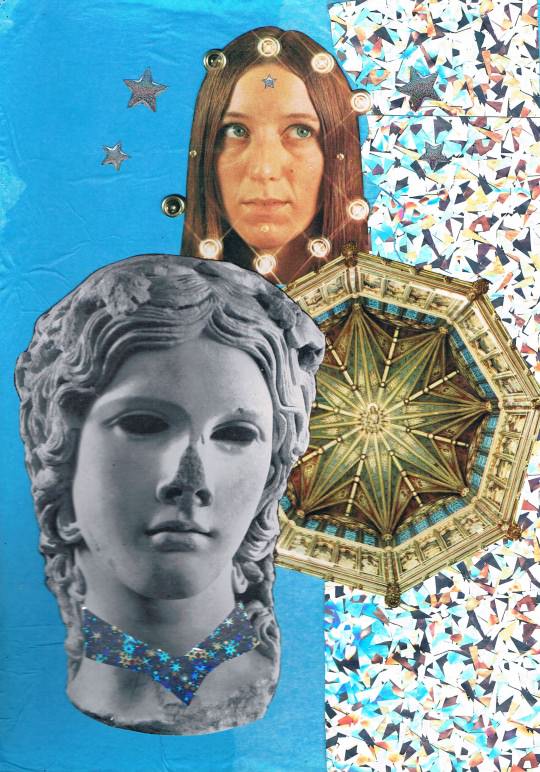 I recently saw M.I.A. give a talk at PS1 in Queens. She was there to promote her new art book, but the most interesting part of the whole two hours was when she started talking about making her latest album, Matangi. She was having writer’s block, she said, and wasn’t sure if she would even make another record. Then one day she Googled her birth name, Mathangi, and found that it belonged to a Hindu goddess of music and learning (whose mantra happens to be “aim,” which is MIA backwards, which is OMG KIND OF BANANAS). From there, she went on a web-search rampage, traveling Google’s endless vagaries and pulling ideas and thoughts off websites at random, then arranging them into a kind of mental collage that she says revealed to her “the spirituality of the internet as it happens,” which she tailored into a personal religion that suited her.

I loved that idea—the internet as our spirit world! As much grousing as people do about how Facebook and 4chan are corrupting the very soul of our society, the internet also has a kind of collective beauty and wisdom, and holds the possibility of actual soul-deep liberation. I found it super invigorating to think about the web as this place of freedom, a new realm of possibility. A place that lives and breathes. A place where we can craft our own highly individualistic religions, or curate our own worlds, or expand our creative license. A place where we can invent and reinvent ourselves anew, with as little or as much loyalty to our flesh-and-bones selves as we choose.

With great freedom, of course, comes great potential for mischief and real harm (see: the movie Catfish and the MTV show it spawned, Manti Te’o, and every awful case of cyberbullying in the news). Making up stories and characters is a kind of lying, and it can be used for good or evil. But that has always been true, and compared with all of the cool things people come up with on the internet, stories of premeditated maleficence are rare. As long as you’re not hurting anyone, or unfairly exploiting their trust, the web can be a big identity playpen—a parallel world where your avatar can be anything you want (it) to be. Basically, everyone with internet access gets to lead at least two lives now—and I think that’s awesome.

My first foray into social media was back in the Friendster days. At first, I was uncomfortable and shy about putting any kind of personal information out there for all the world to see. I was in my early 20s, and I was already IRL-visible as the music editor of an alternative weekly in Portland—where aggressive boys would not hesitate to come up to me at shows and tell me how much I sucked and how fervently they hated me. (I grew tougher as time went on, but I never really got used to it.) I felt generally and constantly vulnerable, and so I didn’t relish the thought of moving into a whole new space where I’d be open to such harassment. But all my friends were on Friendster! I didn’t want to be left out. I also didn’t want to be exposed. So I took a middle path by inventing a persona—a “fictional” character—to inhabit, which would allow me to participate in this new world while retaining some sense of personal privacy.

I called this alternate persona “DJ Skating Widow” and created a whole narrative for her. This wasn’t some kind of Catfish situation—I wasn’t trying to lure cross-country boyfriends with salacious DMs or anything. I wasn’t trying to fool anyone. I used photos of my “real” self, and Skating Widow’s profile was designed to be very obviously fake. She was an innocent young 19-year-old who had met her one true love, Todd, at horse camp, where he was a counselor. When her parents found out Skating Widow and Todd were having sex, they framed him for shoplifting to get him out of her life. It worked—he was sent to jail. While he was incarcerated, Todd and Skating Widow were married. Then he was tragically shanked during a prison fight over, as I recall, a pack of cigarettes, and passed away. From that point forward, Skating Widow’s sole purpose in life was to skateboard in Todd’s memory, and to raise awareness of that particular horse camp. My status updates were pretty elaborate, and I got so into living this alternate persona that I even did a photoshoot outside my apartment in which I wore a black lace dress and a black hat and mournfully clutched my skateboard in front of a rosebush. Everyone knew it was a lark, and some of my friends got extremely into interacting online with SW, posting their condolences and getting in on the joke. It was, I guess, an early social-media art project, and I only ended it because I eventually got bored with it, and moved on to actually blogging as Julianne.

I know it sounds crazy to you guys when your parents/teachers/mentors tell you that in Ye Olden Days people were reluctant to divulge anything about their personal lives on the internet, but back when people actually called it the World Wide Web, out loud, it really did feel dangerous to expose yourself on it. (This is why the oldskis in your life are so freaked out about your blog and your Facebook photos—they’re not being irrational, they just came up differently.) But as LiveJournal and Xanga gave way to Tumblr and Twitter, letting strangers in on parts of your actual life became normal—and now here we are, at this spot where nothing seems like TMI on the internet.

On one hand, I’m into this new transparency—it offers infinitely more chances to know how other people live. Maybe more important, it gives those of us who might feel total weirdos a way to find other people like us, so that no matter what we’re like, or what kinds of problems we might be facing, we can know, just by typing a phrase and hitting return, that we’re not alone. That’s huge. In the decade since I created DJ Skating Widow, I’ve been on every social media platform that’s lived and died—all under my real name, and with information about my life as a corporeal being. There are, of course, still things I don’t broadcast on the internet, and—obligatory WARNING TO TEENZ—they’re the same things no one should post online: my home address, my phone number, information about my finances, anything personal I wouldn’t tell a friend face to face, and (VERY IMPORTANT) any pictures of my body in any stage of undress. And I’m happier this way. Exposing my IRL identity and personality online and having nothing terrible happen as a result taught me that the world wouldn’t end if I showed people in the rest of my life who I truly am. When I was too shy to interact with 3D human beings, practicing connecting with people via the internet gave me the confidence to be open and direct with anyone, anywhere.

But I miss something about those old days, when we were so protective of our lifelong identities that we invented new, mutable ones, and built new realms for them to live in. Sure, in an obvious way that version of the internet was less “honest,” because no one was using their real name or putting every moment of our lives on front street like we do now. But the cloak of anonymity also gave us a kind of safety to express parts of ourselves that we might hide in the rest of our lives. Our second (and third, and fourth) selves might have been more true to our inner desires, thoughts, and turmoil than any confessional blog.

There are still a few places where people regularly play around with internet alter egos: In Second Life and massively multiplayer online games, you create an avatar that interacts with other people’s, and in some cases builds bonds with them that are no less “real” than any other relationship. On Twitter, clever people make parody accounts like Ivy Blue Carter and Lord Voldemort. Most of these parody personas are harmless pranks made just for entertainment purposes, like my Friendster profile. Which is why it sucks that some people use them with bad intentions. (Arizona, btw, is considering making it illegal to create a false Twitter or Facebook profile with the intent to harm.)

At its best, the internet expands and multiplies our ideas of who we can be, and that makes it extra appealing to us women and girls. So much of being female involves being told what and who we are supposed to be, or even allowed to be; transcending those limits takes a lot of work. But not on the internet. Online, we can be 12 different people and things in a single day, according to our fancy. I mean, it’s not like the web is a magical place devoid of sexism—Reddit still exists, after all—but we can avoid those sites and hang out in, or even make, places where we feel empowered. I’m hoping that some of that psychic empowerment can then transfer to our IRL lives.

We’ve effectively ended up in the world science fiction has promised us for years—a place where we’re not limited by our bodies, our physical circumstances, or our ideas of what it means to be human. So why not use this freedom to build worlds we’ve only dreamed of, and then live in them as every single thing we’ve ever wanted to be? ♦