Why Can’t I Be You: Susan Miller

Learning secrets from the queen of astrology. 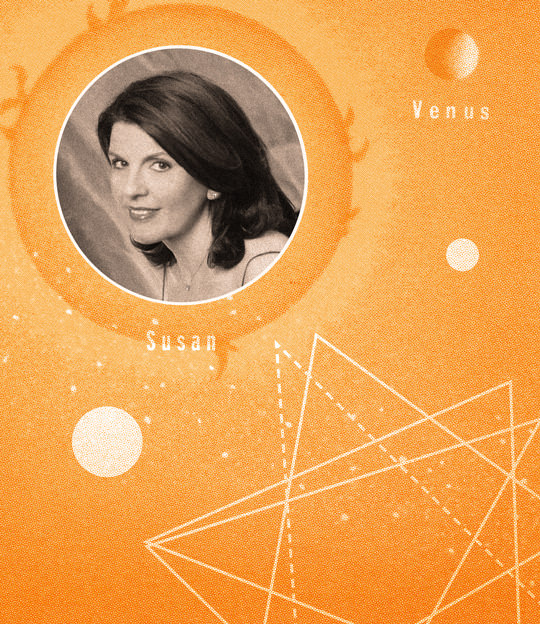 It was hard not to act starstruck when I got to talk to Susan Miller this week. Her website, AstrologyZone; her column in Elle magazine; and her book Planets and Possibilities are essential resources for anyone with even a passing interest in personal astrology. She also does readings for individuals and corporations, and somehow finds time to tweet to her 131,500 followers. Her horoscopes are wise, respectful, compassionate, and highly accessible. They’re also amazingly accurate.

I wanted to find out how Susan became a world-famous astrologer, so I called her up. We chatted over Skype about her life story, her approach to astrological readings, and the one astrological secret she’ll never tell.

DYLAN: When I was a teenager, I studied astrology to find my own way of understanding the world, and myself.

SUSAN MILLER: Actually, I started getting into astrology when I was 14, so young is good!

How did you start?

I had an unusual beginning. My mother was an astrologer, but she never did readings for people—she was more of a scholar. She read every single night; it was a very serious hobby for her. I wanted to learn about it, but she had no interest in passing on her knowledge. I asked her to teach me [when I was in my early teens], and she said, “No, I’m not going to teach you, because it takes 12 years to become proficient in astrology.”

I was born with a rare condition that affected my left leg, where all my mother knew was that every once in a while I’d suddenly be in pass-out pain, and I’d have to lie very still in bed until it passed, which took six weeks. Then I’d be perfectly fine again. I’d get about one attack a year. I couldn’t go out, I couldn’t do anything; I was a prisoner. I couldn’t go on trips, because what if I got an attack? I was always different from other kids, and I couldn’t do everything everyone else did. I was like a little black sheep behind a plate-glass window. It’s OK, though, because I think that whatever makes you different is probably a good thing, and you should nurture it! It gives you a perspective. Because of my condition, I never went to high school—I studied in the hospital and went straight to NYU.

When I was 14, I wrote to Horoscope magazine to ask if I’d ever walk again. My mother asked me one day, “Did you write to Horoscope magazine?” I replied that I had, about seven months ago, but they had never answered. She held the magazine up, and I was in the latest issue. She asked why I didn’t ask her instead, and I said that I knew she would never tell me that I’d never walk again! I wanted an honest answer.

I think that’s a big reason that a lot of people get into any faith or spiritual practice, because you’re looking for explanations.

And for something that can give you some clues on how to get there.

So we read the magazine’s answer together: the writer said she thought I’d be able to walk again, and predicted when [that would happen]. I didn’t understand all of the astrological terms she used, so I asked my mom what they meant. That’s when she decided to teach me.

I made a deal that I would study astrology with her for 12 years. I was only allowed to do charts for family members—no friends. I didn’t know anyone, anyway, because I had lived in the hospital for so long.

My mother taught me clear communication. She said that if you say the wrong thing, that’s bad, and if you say the right thing the wrong way, that’s just as bad, because the person will misinterpret it. I think most people study too fast; they try to eat the whole pie in one sitting. Beginners should focus on just the planets at first, not the asteroids—I don’t believe that asteroids have the same influence as planets. The planets are the board of directors of the solar system. It’s so complicated to learn all of it in the beginning—it’s like spinning 10 plates at once on sticks—but eventually you start to have breakthroughs.

My mother said, “You have to learn it all, because I don’t want my daughter to be making any flat statements.” “Flat statements” are what I call “profiling”—like when someone says, “Oh, you know those Virgos!” It’s a bad practice, because everyone is an unusual soup of all the planets. Your chart is unique. There will never be another Dylan. Even twins are different.

That point seems to negate the argument that says, “Well, I don’t believe in parceling all of humanity into 12 categories.” There’s so much more to it!

It is true that people of a given sign share certain attributes, but each sign is divided into thirds, or decans—and so even people who share a sun sign have more or less of a given quality depending on which third of [that sign’s designated dates] you were born during. [Your sun sign is the thing you tell people when they ask you what your sign is; it’s determined by the position of the sun when you were born.]

And you can’t just read the sun sign—you have to read the rising sign, too. Most people don’t know that! There are so many tiny variations in everyone’s chart, because astrology is so mathematical.

What is a day in the life of a professional astrologer like?

When I was nine years old my mother told me that your rising sign predicts your profession. My rising sign is Gemini, and she said that meant I was going to write for a living. And now I write all day long! I go all through the night sometimes. I also have to have lunch meetings with people sometimes, but I never schedule those for the end of the month, because that’s when I’m writing out all the monthly horoscopes. When I travel, I have to set aside certain days for just a block of writing.

Where do you get the information that you base your forecasts on?

NASA publishes where the planets are. I have a program on my computer and an ephemeris—it’s a tool that helps you find the positions of [astronomical objects] in the sky. And then I do a lot of geometry—so besides writing all day, I’m also doing math all day.

I have to do 24 charts a month—a new-moon and a full-moon chart for all 12 signs. When I’m reading those charts, it’s like having a Polaroid of the sky.

I also have a calendar that lists every aspect [an angle a planet makes in relation to other astronomical objects], even the ones are that aren’t important, and I make notes on that calendar. Then I publish a calendar for normal people and I write down in English what all of that means. Also, I’m writing for a world audience, so I have to worry about time zones, too!

Intuitively, it sounds impossible. But there are many things we don’t understand in the universe. We don’t know why astrology works…but we do know it does! I suggest reading my summary at the end of my monthly forecasts. See if I’ve picked up on the trends that you saw in your life this month.

Astrology’s so elastic and yet has such a firm structure, so it’s perfect for creative brainstorming. And for finding talent! That’s my favorite thing to look for in a chart—pure, raw talent that you can develop…if you want to!

Let me ask you for some astrological insight about Rookie. We have a different theme every month. Last month’s theme was Faith; this month’s is Mythology. Were those good themes for December and January?

Yes, because Capricorn [December 22–January 20] rules things of the past of value, and mythology comes from ancient history!

I know that you’re Catholic, and I’m fascinated with the relationship between that faith and your faith in astrology.

What most religious people worry most about [when it comes to astrology] is predestination—they misunderstand astrology as telling you what will happen, and that your fate is unchangeable. But it’s not like that. Trends will come up which will predict things, but you use that information to plan events in your own life. I can tell you that it’s a good time to do this or that, but you have to do something to show the universe your intent. You have to supply the energy.

I don’t see any dichotomy between religion and astrology. I always want to be the one you come to when you need a little thinking and a little inspiration. I hear people’s prayers, and I take that with great respect. It’s a privilege to be able to do that.

I don’t even tell people my sun sign, because people would think I favored one sign over another…I don’t! I would never! I love all the signs! ♦

Susan Miller’s AstrologyZone daily horoscope is available for free on the internet and for the iPhone; the deluxe iPhone version and the Android version cost $4 apiece. A personal horoscope by Susan costs $50; you can order that here if you wish.