All conflict and resolution, in one elegant package. 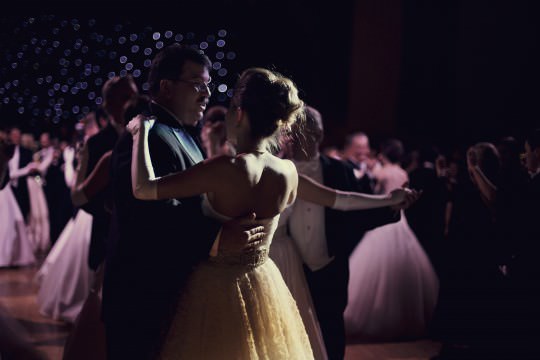 But by the early 18th century, rich English parents had figured out that if they took their daughters to London during the season of social events (balls, concerts, teas, riding in the park) that happened when the aristocracy was there for Parliament’s session, they could find husbands for them. Each girl was first presented to the king or the queen, and then the season of parties began in earnest. By restricting their teenage daughters’ social lives to this one season of parties, parents effectively limited their pool of possible husbands to a selected group of aristocratic or rich men. Girls would be introduced to valuable suitors at exclusive parties, and prevented from attending “inappropriate” events where they might be swept off their feet by the 18th century equivalent of a guy with a motorcycle—prevented from ever even seeing him.

And from this contingency plan, an entire social scene evolved. The more luxurious the parties were, the more likely the girls were to fall in line. Exclusivity became deeply desirable. The debutante season was both beautiful and glamorous, and beauty and glamour did much to cover its ugly commercial core.

Money and status were to some extent interchangeable: the more status a girl had (the “better” her family), the lower her dowry needed to be. The lower the status of a man seeking a wife, the more money he had to have. An impoverished aristocrat might marry a massively wealthy heiress—he brought her status and she brought him money. (This storyline might be familiar to those of you watching Downton Abbey: the American heiress Cora got the title of Countess of Grantham, and Lord Grantham got her money to fix and maintain his house and property.)

Teenage girls were keenly aware of their predicament. They worked tirelessly, almost from birth, to learn the complex dance steps and precise etiquette required for their debuts. They recorded their conflicted feelings about the debutante ritual into countless diaries and letters, which I’ve found and read in the process of researching my book. Especially in the antebellum South, where parents liked to marry their daughters to much older men, the sort of men with power and social status, the girls recorded complaints about “frisky widowers” and expressed shock that a man so old would “go call on a girl not yet 18.” One “frisky widower,” according to the diary of a Virginia teenager, stood “very high in the community as a most estimable, excellent man with plenty of money, but none of the girls like him.” Parents might have liked older men for their daughters, but the daughters did not. Some participated enthusiastically, but resented newcomers and competition. One Arkansas teenager made a list of her admirers: “All of these are my boys by right and if any body DARE DISPUTE the fact let them come forward and do it to my face that I may give them what they deserve.” Don’t mess.

Some women felt as Edith Wharton did, who wrote in her autobiography that her season was a “long, cold agony of shyness.” Eleanor Roosevelt hated her debut, but her cousin Alice Roosevelt (daughter of Theodore) loved hers. “Princess Alice” was a wild child who was frequently in the tabloids, smoked on the roof of the White House, carried a snake in her purse, and bet on any horse race she could—exactly none of those things made you a lady in 1903, but exactly all of them make you awesome for all time. Her debutante ball was a national sensation, not just in the tabloids, but in every major newspaper as well. Some women enjoyed the process and were happy to have their names peppered throughout gossip columns and in fashion magazines. Brenda Frazier, the Paris Hilton of the 1930s, was so famous that her face sold soap and cars. She claimed, in a 1963 Life magazine article, that her mother had forced her into the debutante limelight at 17 and said, “I was a fad that year, the way midget golf was once a fad, or flagpole sitting” (the planking of its day).

In many ways, for the debutante, the season was strangely freeing: it was, back then, the one chance she would have to experience even the barest hint of control over her own body and mind. The short time she spent between her parents’ house and her future husband’s was the only time in her life when she made some of her own decisions, where she had power. At a party, this might mean noting the texture of champagne sliding down her throat or the pleasing restraint of a corset, understanding that all eyes were on her. The debutante is a character in transit, someone whose life circumstances were about to change radically, and there is something irresistible about that, and also very sad—so it’s no coincidence that many of the first English novels feature a debutante character. She’s all conflict and resolution, in one elegant package.

So, to return to my original question. In 2013, women can advance our lives without marriage, but many girls still choose to participate in the debutante ritual—some enthusiastically. Why? I happened to ask one debutante at last month’s party how she came to be there, and she told me that when she was 16 her parents took her on a trip to New York. They stayed at the Waldorf at the same time the ball was happening. The family sneaked onto the balcony and watched as each girl was presented. The girl said to her mother, “Mom, I want to do this.” Four years later, she made her debut, a princess fantasy fulfilled. It was clear that this girl found the whole thing incredibly glamorous—and the possibility that it might not be within her reach (she told me this was new for her family) probably only made it more seductive. There are few coming-of-age rituals left for most teenage girls, yet being a teenager is distinctly different from being a child, or an adult. The debutante party is one way to mark that. 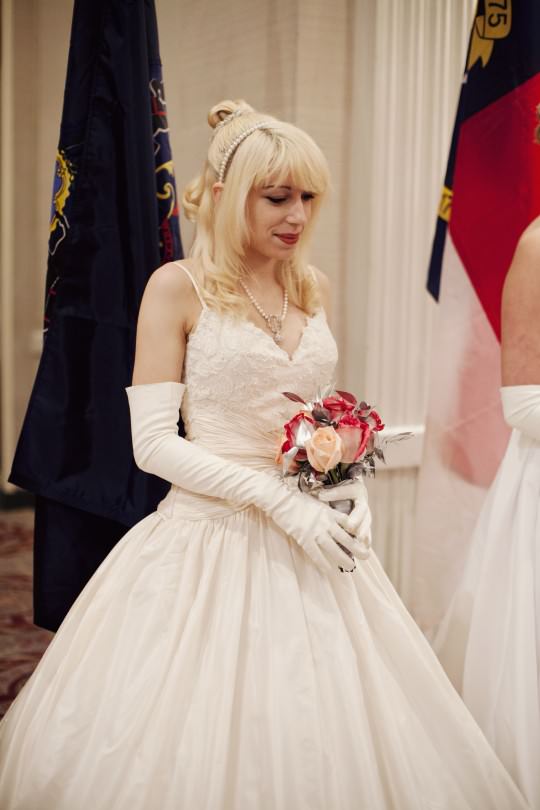 The most interesting-looking girl at the party was a Russian-American girl from Pennsylvania. She had matte bleached-blond hair, good nail art, and a courageous face, not pretty like a doll, but beautiful. When I first saw her, I thought, Hmmm, this does not look right (but it does look awesome). She looked nothing like the other girls, who were smooth, preppy, clean, shiny, bright. This was the only girl who was not smiling from ear to ear for the entire party. This girl would be beautiful throughout her life, and had the sort of fierce, interesting face that doesn’t wither with the meandering disappointments of country-club life. While the others looked excited about the proceedings, this girl looked like she was in another place, in character, counting the minutes until her presentation was finished. We locked eyes a few times, but I was never able to talk to her. Later, I googled her name to see if I could get in touch for the interview I wasn’t able to have with her on the night of the party.

Unlike the other girls, she was traceable to something other than a Facebook page with “likes” such as “Mitt Romney” and “football.” In her non-debutante time, she is a cosplayer. Images of her in various manga costumes and excellent wigs are all over the internet. I found myself hoping fervently that she would do debutante cosplay, taking that strong subversive face to Japan, where she would pantomime debutante presentations and send the whole thing up. ♦

Kristen Richardson was born in London and raised in Connecticut, and now lives in Brooklyn with her husband and their son. Her book about the debutante ritual will be published by Sarah Crichton Books/Farrar, Straus and Giroux.