Letting go of the one you loved the most. 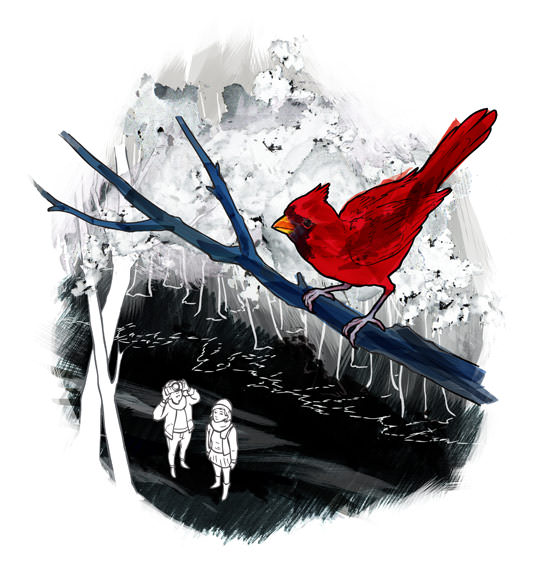 Marisol spotted the cardinal first, sitting on a branch above us. We were walking in the woods, taking pictures of trees and rocks and piles of dirt. It was two days after Christmas, and new cameras make you think everything needs to be immediately documented.

“Check it out, it’s good luck,” she said. “Cardinals are like the face-side-up penny of the bird family.”

“Are you sure?” I asked. “I thought they represented major changes.”

“So they’re fortune-tellers? Like ravens?” Marisol was obsessed with ravens before they became “too corporate.”

“Not as doomy as ravens, I guess.”

“Yeah, ravens are pretty hardcore,” Marisol said, aiming her lens at the cardinal and snapping a picture. “Who told you that anyway? Iggy? If it was Iggy, forget it. Dude knows nothing about birds. When we were going out we had a fight, because he insisted that penguins could fly, but were just ‘too lazy’ to do it.”

“You know Iggy, though! He’s not even dumb, he just acts dumb to antagonize me, which is so dumb.”

“Well it wasn’t Iggy who told me about the cardinals,” I said, trying—and failing—to get my own lens to focus. “My mother did, when I was little.”

I shook my head like I always do when someone tries to apologize for something they had no control over—no problem, no worries, no big deal—and took the picture. I managed to get one shot, a wing exiting the frame, a wave or a warning, depending on what you want to believe.

My father refuses to eat anything that comes in casserole form. If it can be shoved in a pan and baked at 350 degrees for about 45 minutes, he won’t touch it. Funeral food, he calls it, and he’s right. The smell of lasagna still makes me feel like I have to get up and make polite conversation with strangers. I like being in a place where everyone calls me Bridget, as opposed to Bug, which is what my mother called me when I was a baby. It feels like I’m cheating on her when it comes out of anyone else’s mouth.

We moved out of our house and out of our town after my mother died. My father couldn’t take the memories he seemed to find on every single blade of grass he passed on the lawn, and I couldn’t take the sympathetic eyes of schoolmates, who tried to comfort me by bringing up everything from heaven to Lily Potter. One kid even talked to me for an hour about alternate universes.

“There’s a chance you’re all together, on a separate plane,” he said.

“There’s also a chance that we’re all giant monsters made out of eyes, and we’re watching this very conversation and laughing really hard,” I said.

He didn’t talk to me much after that.

I was 10 when my mother told me about the cardinals. One had landed near the birdfeeder in our backyard, right around Christmas, and she pointed it out to me.

“Isn’t he beautiful?” she asked. I told her he was. My mother was the world. Beauty was whatever she said it was. She could have actually been a giant monster made of eyes, and I would have urged her to enter the Miss Universe pageant. Maybe she still can, on some alternate plane.

“Cardinals are special, Bug,” she said, staring out the window. “They show up only when they have a message to bring you.”

“A good message?” The look in my mother’s eyes suggested otherwise.

“Could be. It’s usually a message that a change is coming, maybe bad, but maybe good, and that you should keep your eyes open.”

Four years later, when we moved into our new house, the first thing my father did was take down the birdfeeder that had been left behind and throw it in the trash.

Marisol is the only person in my new school who doesn’t drive me crazy. I love her. We met during the second week of AP English, and became best friends when were both held after class for handing in “obscene” poetry. Mine had the word shit in it. Hers was about a nymphomaniac rabbit who was ashamed of being a cliché. We were both told that our poems were “vile” and that we had “too much talent to write such filth.”

“Filth is a talent unto itself,” Marisol argued. I said something about censorship and meter (“Shit just sounds better than shoot in this particular instance, Mrs. Hayfield”). We were both let go with a warning.

Inseparable since our warning—Marisol dubbed us “the Vile Vixens”—we’ve shared almost everything. She knows about my mother, but she never pushes for information, which is good, because I’m not a fan of giving it. “She’s gone” is what I usually tell people who ask. “Deceased” is what I have to write on forms. “Shoo” is what I say to any bird that lands on the tree outside of my bedroom window. I don’t want to talk to them, and I don’t want to know what they’re trying to tell me.

March is the worst month, no matter what T.S. Eliot says. It is bleak and cruel and it lasts longer than a distant cousin’s birthday party that you’ve been forced to attend. It can’t decide if it wants to be winter or spring, so it plays with the idea of both, creating a frosted mud-swamp of gloom. Yesterday it was 43 degrees. Today it’s 35. The weatherman, relying on radar screens and the weeks-old behavior of that groundhog the world refuses to stop bothering, is predicting that a storm may hit on Friday, which also happens to be my birthday. Other mothers of the world, I imagine, are buying up water and candles in that panicked haze of excitement that comes with a potential blizzard. My dad hasn’t been to the store yet.

“Looks like we’ll have to call off your birthday dinner, kid,” my father says, hanging up the phone. We are both watching the weatherman wave his hands in front of a computer map filled with clouds. Birthday dinners are how we celebrate things now. Someone else’s table, someone else’s silverware, someone else’s world. Parties are for people with the ability to celebrate in their own space.

“Do you really have to go?”

“The hospital needs me,” my father says. “This storm is supposed to be pretty nasty, and that means a busy shift.”

“Can Marisol still sleep over?”

“Sure.” My father likes Marisol, mostly because she makes me laugh. He is not thrilled about my birthday present from her, however: a green satin jacket with “Vile Vixens” stitched on the back. She made one for herself, too. He makes a face when he sees the stitching.

“I think you’re just mad that she didn’t make you one,” I say.

“That could be it,” my father says, laughing. It is a sound I want to capture and lock away and keep forever, a rare record I want to archive and play whenever I need it. “Behave yourselves tonight,” he says, pulling on his parka and gloves. “I should be back early tomorrow morning. Don’t mess around outside. They’re saying it’s going to be a big one. You remember what to do if the power goes out, right?”

“And if the phone lines go down?”

“Mrs. Camp is right next door, and her husband has that Y2K bunker that he never used. Get over there if it gets too rough.”

“Have you read The Road?” Marisol asks. God, I love Marisol.

“I love you,” my father says. He opens the door and looks up at the looming clouds. “Happy birthday, Bug,” he says, pulling me toward him. “That’s from the both of us.”

The snow starts at 11:30. Small white flakes, fast and fleeting, melting as soon as they hit the ground.

We are watching movies and eating ice cream cake. The crawl at the bottom of the screen keeps telling us about a Winter Storm Warning, but the view from the windows shows a different story.

“Oh!” Marisol says, digging through her backpack. “I almost forgot. I have another present for you.” She pulls out a square wrapped in silver foil, with a card taped to the top. I open the card first. Happy Retirement, it reads. On the inside, it says: From all of us. Marisol has taken the liberty of signing roughly 20 imaginary names, all with congratulatory messages. Best wishes, Harry, reads one. To whiskey, wild women, and—oops! hi Sheila! Just kidding—a happy retirement to you both. May the best years be ahead.

“You’ve worked so hard,” Marisol giggles. “Fifty years in plastics! What an achievement. Best to Sheila as well. What a firecracker. Gonna miss her spinach dip at the holiday party.”

“You are demented, and I love you.”

“I love you, too. Now that you’re leaving the company, can I have your corner office?”

“There’s still a present to open, you know,” she says, pushing the silver square my way. Inside the foil is the picture of the cardinal she took while we were in the woods.

“Listen,” she says, before I can say anything. “I know I messed up that day, bringing up…you know.”

My eyes are on the cardinal, his wings lifted, his eyes calm and peaceful.

“And I know you have a history with these things.”

He is steady and elevated at once. She caught him just as he was taking flight, one foot still clinging to the tree.

“But I wanted to give you this, because, um.”

The red of his feathers glows against the December sky, bright and marvelous, a beating heart against the bones of empty trees.

“I wanted you to be able to see cardinals the way I see them, I guess,” she finishes. “You know. A penny, face-up.”

“Not as beautiful as those dames we met in Atlantic City in ’65.” When Marisol commits, she commits.

“Those were the days, Johnny.”

“Johnny? Oh, no. My old-man retirement name can’t be Johnny. I dated a Johnny once and had to break up with him because he had leopard-print boxers. It was a nightmare.”

I hang the picture on the living room wall and we stay up all night, watching a light snow coat the ground, laughing until our stomachs are sick, and scooping up melted ice cream cake with our fingers. We fall asleep on the floor around 4 AM, and I wake an hour later when I hear my father’s key in the front door.

“Hey, Bug,” he whispers when I wave to him. Marisol is dreaming, her leg kicking sporadically, her mouth moving without making any sounds. “The storm was kind of a bust, eh? Moved out to sea, I guess.”

“I promised I would,” he says. He notices the cardinal on the wall and stares at it for a minute.

“Where’d that come from?”

“Marisol took it. It’s my other birthday present.”

The snowflakes continue to fall outside and my father continues staring at the bird in the frame.

“Those wings,” he says. “It’s almost like he’s saying hello.”

“Or,” my father says, pulling off his wet gloves and letting his hands get warm, “maybe both.” ♦