Ponies in sweaters, Army equality, the news from Sundance, and sugary kawaii. 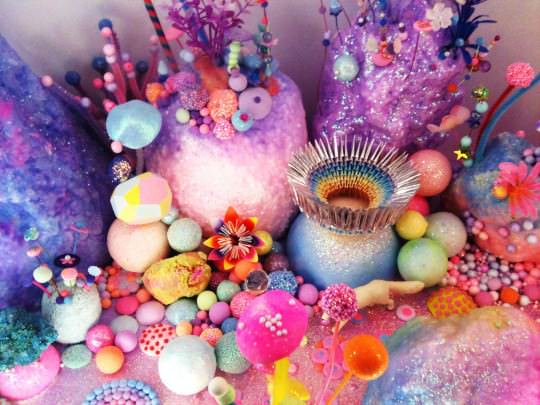 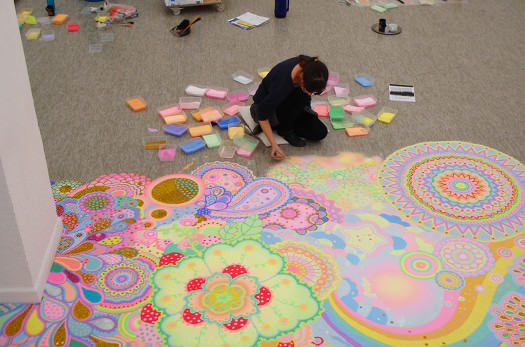 This post on the Japanese culture blog Naver introduced me to the work of Nicole Andrijevic and Tanya Schultz, Australian artists who go by the moniker Pip & Pop. Known for building elaborate installations out out of sugar and plastic, they love everything kawaii and are inspired by Japanese culture. I love how the miniature landscapes they create are cute and dreamy and a tiny bit creepy at the same time.

Tavi
This article in New York magazine, called “Why You Truly Never Leave High School,” has been HAUNTING ME. First, my friend sent me the link and I read it on my phone at the airport. Then, I got on the plane and a copy of the magazine was in the seatback pocket right in front of me, open to the article. The next day, another friend showed me a TED talk by Brené Brown. Her name sounded familiar, I realized, because her research is heavily featured in the magazine piece. Was some cosmic force trying to make sure I understand how the anxiety I’ve experienced since the age of 13 will stay with me into adulthood? That a building full of confused people the same age is possibly the worst place for a teenager to be on a daily basis? The article is a huge bummer, but also mind-blowing and very worth reading all the way through. I might even feel more compassion towards my fellow classmates/hormonal bodies now.

Arabelle
And in case that New York magazine article didn’t bum you out enough, a study published in the journal JAMA Psychiatry showed that teen girls are more at risk for anxiety and depression than boys. Science backin’ up what feminists have known all along. I mean, yay for proof, and boo for all the things that make this true.

Stephanie
As the proud sister of a female army vet, I was glad to read about the Pentagon finally lifting the ban on women in combat, a decision that opens up more front-line jobs and lets women try out for elite special forces or commando roles previously only open to men. As noted by Jezebel among others, women have already been serving in combat; the difference is that now they are eligible to receive honors for their service.

I love soap operas, and always thought that One Life to Live was the best thing ever. When it went off the air a year ago, I was devastated. A company called Prospect Park bought the rights to the show and it was supposed to air online, but nothing happened…until now!!! A couple weeks ago it was announced that my beloved OLTL will get a new life on the Online Network in April. Since I’d been jerked around before, I was afraid to get my hopes up, but this week it became official: a bunch of actors, including Erika Slezak, who plays the matriarch of the show, have signed on to reprise their roles. I can’t wait to see how this is going to play out! 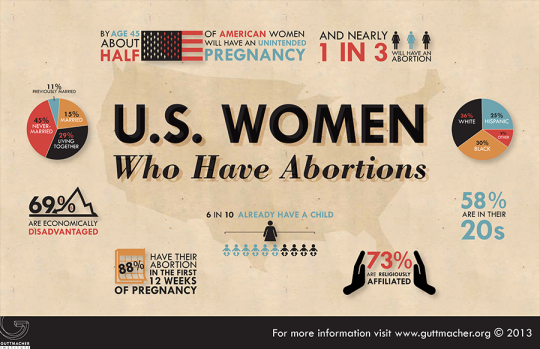 This week marked the 40th anniversary of the Supreme Court decision Roe v. Wade, which made abortion legal in this country under the right to privacy. These handy infographics from the Guttmacher Institute show how all these decades later, access to abortion is still severely limited for many people, by geography or economics: 42% of women who have abortions live below the federal poverty line, 57% of women pay out of pocket for their procedures, 87% of counties in which 35% of girls and women in this country live lack abortion providers, and poor women have unplanned children at a rate six times that of higher-income women. These are a lot of upsetting statistics to digest, but they remind me that although our reproductive rights are legally enshrined, access to important services is far from guaranteed, even in 2013.

I don’t even know what to say about these Shetland ponies wearing custom-made Shetland cardigans on the island of Shetland, Scotland, except these pictures make me wildy happy and like I need to hop on a plane to the UK immediately. Well played, Scotland. 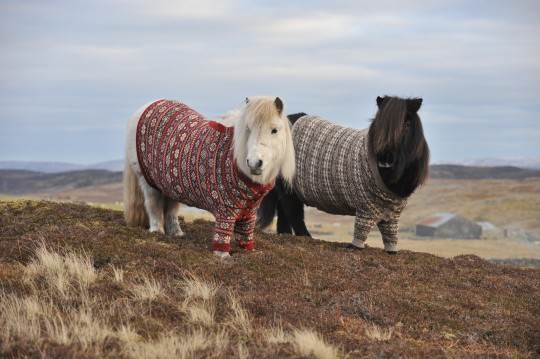 Bianca
I got a real kick out of this article about the business cards of famous people. The personalized cards of Walt Disney, magician Harry Houdini, and artist Andy Warhol reminded me of the rad Tumblr Letterheady, which features the stationary of cool people like Lena Dunham and David Bowie. There’s also a great site run by the same guy called Letters of Note, which has incredible stuff like “To My Old Master,” a letter from an ex-slave to his former owner, and “Our Differences Unite Us,” Barack Obama’s correspondence with the daughter of a gay couple. All this stationary fetishizing and letter reading has inspired me to pick up a pen and get writing!

I’m a big music documentary geek, so I’m totally freaking out over this week’s Sundance Film Festival, which included the premiere of Pussy Riot: A Punk Prayer, directed by Mike Lerner and Maxim Pozdorovkin, which showing everything from the Russian activists’ practice sessions to their performances to the trial that made headlines around the world. Pussy Riot member Katya Samutsevich Skyped into the doc’s Q&A session to answer audience questions. Other Sundance films I can’t wait to see: Foo Fighters front man Dave Grohl’s documentary Sound City, about the studio where Nirvana’s Nevermind album was recorded; 99%: The Occupy Wall Street Collaborative Film; Salma; and The Square. 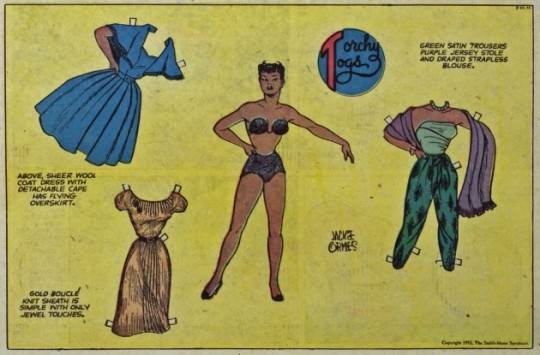 My friend Lindsay posted a link this week to this profile of Jackie Ormes, the first black woman in America to become a syndicated cartoonist. Although she was working in the ’40s and ’50s, a time in which people of color were treated as second-class citizens, her strips regularly addressed social and political issues. I definitely want to read more about Ormes and her most popular character, Torchy Brown. 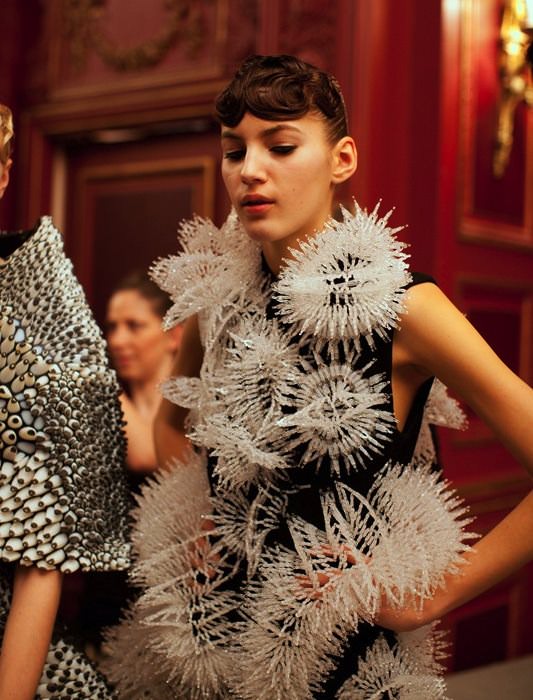 Of all the Paris couture fashion shows this month, hands down THEE most breathtaking was Dutch designer Iris van Herpen’s take on tortoise skin, silvery feathers, and spiky fur–ALL MADE USING A 3D PRINTER. Who doesn’t want to look like a crazy animal hybrid from prehistory–or the distant future? The Dutch designer’s got Grimes in her latest ad campaign, but this collection seems more like it’s for Bjork, whose aesthetic union of the earthly and the computerly reflects van Herpen’s desire to fuse human stuff with science fiction. Van Herpen is really a visionary, so I got super psyched when I saw that Popular Science had profiled the collection, focusing on her “tech-couture,” and how she collaborated with architects like MIT’s Neri Oxman on the dresses. The piece explains how they took inspiration from Argentine author Jorge Luis Borges’s Book of Imaginary Beings. Their goal was to create “myths that one could wear.” DYING. Also this week, Dazed and Confused profiled van Herpen and she talked about the future of 3D printing, joking that at some point people will be able to hack into her dresses. This woman is the perfect combination of artist, tech nerd, and cyborg feminist.

Jenny
This week I had a studio visit with an artist whose work I really admire. When he asked me about my work, I mentioned how when I lived in France I had to walk with my head down every time I went outside for fear that if I accidentally made eye contact with a man on the street I would be followed, harassed, touched, or propositioned for sex. The artist asked me two questions: “You know that females also sexually harass men, right?” and “Not that this is completely to blame, but were you dressed–you know–were you wearing something short?” I really didn’t want to go on explaining my current project, a series of poems about male entitlement and the violence it breeds, because I realized I was talking to someone who perhaps does not see violence against women as a systematic problem. News reports about rape make it seem like it’s something that happens elsewhere–in bad neighborhoods, in third-world countries, to women who made themselves vulnerable to a “bad situation”–and there is rarely consideration of WHY men assault women so frequently. Rebecca Solnit’s beautiful essay for Guernica investigates all of this, and cites chilling statistics like that in the piece’s title: in the U.S., there is “A Rape a Minute, a Thousand Corpses a Year.” In the wake of the New Delhi rape and murder of Jyoti Singh Pandey, Solnit suggests that it’s time to change the way we talk about rape: “We have far more than 87,000 rapes in this country every year, but each of them is invariably portrayed as an isolated incident. We have dots so close they’re splatters melting into a stain, but hardly anyone connects them, or names that stain. In India they did. They said that this is a civil rights issue, it’s a human rights issue, it’s everyone’s problem, it’s not isolated, and it’s never going to be acceptable again.” ♦