Sunday Video: The Do Not Enter Diaries 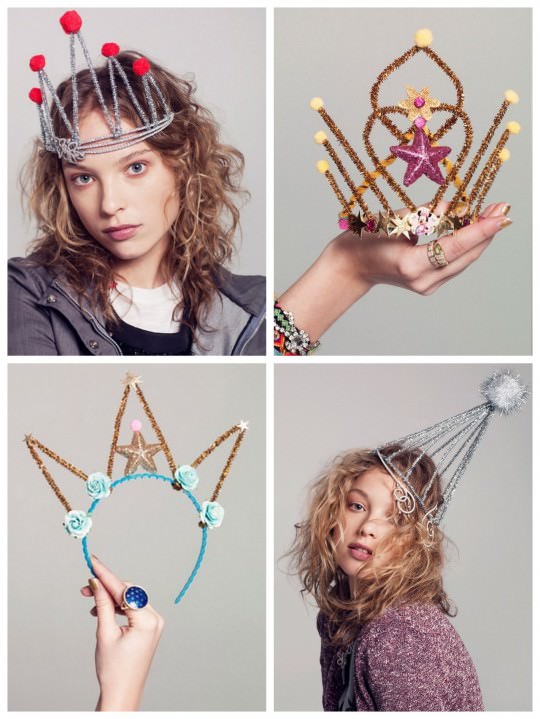 When I saw this V magazine editorial featuring teenage girls and pipe-cleaner-and-trinket-adorned tiaras, I could only think one thing: Rookie, duh. I want to wear every single one on my head at the SAME TIME.

Bleached, who played suuuch an awesome show at Rookie’s Strange Magic Prom, has released a new song from their forthcoming LP Ride Your Heart Out, now set for an April release. I love this band, and if they ever swing by your town you HAVE to see them in action.

Naomi
Stephen Rodrick’s piece about the making of The Canyons, the new film written by novelist Bret Easton Ellis and starring Lindsay Lohan, is well worth the long read. The piece is kind of sad but ridiculously compelling at the same time, and way more satisfying than the endless TMZ newsflashes about Lindsay’s misdeeds.

From this mysterious video he posted this week, I’m going to guess that Justin Timberlake has made some new music! I’M SO READY, JUSTIN.

Stephanie
Since I’m a big Chicago Blackhawks hockey fan who spent the past three months bored and frustrated without any games to watch, my biggest thrill of the week was the announcement that the NHL Players’ Association had FINALLY reached an agreement on contract terms that would end this insanely long lockout. I’m SO looking forward to watching my beloved Hawks play once again.

This week my hero David Bowie turned 66, released a new song after a 10 year silence, AND announced that he’d release a new album in March! I’m really not sure what I think about this new song, “Where Are We Now?”–I don’t think I’ll ever love anything as much as the old stuff. But he will always be incredible in my eyes. I’m particularly impressed that in this era of constant internet leaking, he managed to keep his plans secret until the actual release date. It’s just more proof that he is in fact a beautiful alien from another world.

I’ve been a dance nut for a while–I used to make up dance routines in my backyard, make tickets, and charge each family member a dollar to watch my performance. This week I stumbled upon an announcement that made my heart sing: The New York City Ballet has teamed up with contemporary artists for the NYCB Art Series, which will feature original visual artworks inspired by the company’s dancers. The first collaboration is with the Brooklyn-based art collective FAILE, and it looks divine! Audience members at the special exhibition performances on Friday, February 1, and Wednesday, May 29, will receive a limited-edition artwork made especially for the event. How cool that you can walk away with a piece of the show itself! I so wish I could go to this. Darn you, 9622.57 miles between Australia (where I live) and NYC!

Growing up, Riot Grrrl meant a whole lot to me. So of course I loved that The Guardian republished a classic feature from now-defunct magazine Melody Maker on the 1993 British tour of Riot Grrrl bands Bikini Kill and Huggy Bear.

I could write a book about boy bands. Sure, they are overly manufactured and cheesy, with cracking voices and inevitable breakups looming on the horizon. But that doesn’t take into account the magic– yes, magic–of a group of pretty boys singing about kissing. This new One Direction video is amazing for many reasons (their weedy frames and bare chests, their ski pants, their goofiness), but what I like most of all is that they are clearly having a blast. When Zayn kisses his fellow One Directioneer on the cheek at the end, it seems like he is showing genuine affection, not to mention making explicit the homoeroticism that has always been the bread and butter of bands like this. Two thumbs up from this dirty old lady.

Rose
I think we can all agree that mysterious deep-sea creatures are Literally the Best Thing Ever. This week there was some very important news from the world under the waves: marine biologists have finally recorded video of the heretofore undocumented giant squid. For now we only have some beautiful (and kinda terrifying) still pictures of its iridescent face; the actual footage will air as part of the Discovery Channel’s show Monster Squid: The Giant Is Real on January 27th. I can’t wait to finally lay eyes on the magnificent Kraken!

I LOL’d reading about how programmers tried to teach IBM’s Jeopardy-winning artificial intelligence system Watson how to use colloquial language by inputting the whole of the internet’s Urban Dictionary. It was a good idea in theory, but in practice, the damn computer couldn’t tell the difference between the profane and the polite. After Watson started answering “bullshit” to researchers’ questions, they had to delete all those swear words from its database. Someone needs to make a Sassy Watson Twitter account STAT.

“Whip My Hair” is a good song (don’t let anyone tell you otherwise), a great video, and the best sentiment, but Willow Smith is a little bit older now. This week she released a song called “Sugar and Spice,” which samples Radiohead’s “Codex” and includes melancholy lyrics such as “inject my soul with darkness” and “the past is like a tear-stain.” It’s beautiful and pairs perfectly with her constantly updated Tumblr saule pleurant (translation: weeping willow), a scroll of silly gifs, selfies, and some revealing dispatches about school, braces, and parents. Willow, who is 12, is a child of celebrities, but she’s still got regular kid problems (and really great taste).

Jamia
This month, Zooey Deschanel responded to her haters in Glamour: “I want to be an f***ing feminist and wear a f***ing Peter Pan collar. So f***ing what.” In response, The Cut ran a snarky piece acknowledging Zooey’s declaration of gender solidarity while expressing frustration with what they deemed her “self-infantilizing” femininity. The Cut’s words got under my skin, and I started thinking about how I sometimes feel like I am not a good enough feminist, like when I’m mindlessly grooving to the despicable Chris Brown at a party or when I find myself genuinely enjoying an America’s Next Top Model marathon on TV. When I read Amanda Hess’s defense of Zooey on XX Factor, I realized how cool it is that the actress embraces feminism on her own polka-dot-wearing indie ingénue terms. Thank you, Amanda Hess, for reminding me to check myself next time I get caught up policing other people–or myself.

Britney
Eva from the blog Style Wandering has created two amazing new websites: The Wandering Collective and Teenage Diary. The former collects art, photography, poetry, articles, diaries, collages, etc. by teenage feminists, while the latter is basically the diary version of Teenage Bedroom—it features great journal pages and letters, letting us in on little private pieces of other people’s lives.

Tavi
THIS TAYLOR SWIFT/JACKSON 5 MASHUP IS GLORIOUS. Amy Rose sent it to me and I’ve been playing it nonstop. Taylor’s live acoustic cover of “I Want You Back” is also great, FWIW.

Suzy
Behold, Arrested Misérables, aka Les Miserabluths: Arrested Development and Les Misérables join together in corn-hole-y matrimony. This genius blog combines screenshots of the 2012 hit film with some uncannily fitting quotes courtesy of the Family Bluth. Tobias Fünke himself couldn’t have made a better match.

I can’t get over this video (posted this week on Godtube). Some guy singing alone on a stage, OK, whatever…wait, is that a baby? It is, it’s a baby, wandering out on onto the stage to hug his daddy! Aww. And now the baby is dancing! And now this is The Baby Show, and Baby knows it. He wanders off for a bit, but he keeps coming back for more. For as long as there is music, Baby is going to dance. And then suddenly there are these people wearing what appear to be cereal boxes…and it’s all too much.

Frida Kahlo’s closet was just opened for the first time since her death in 1954, and its glorious contents put on display at the Frida Kahlo Museum in Mexico City. You can look at some of Kahlo’s incredible Tehuana dresses and strangely beautiful orthopedic corsets in the video above, in which Circe Henestrosa, the exhibition’s curator, explains that because the museum is too small to show everything at once, they’ll replace the clothes and jewelry on display in five months–in other words Kahlo owned enough clothes to fill TWO museums! You can read more about Kahlo’s closet, and the exhibition, here.

On Tuesday the public-radio station WNYC aired this brilliant piece about slut-shaming by 16-year-old Temitayo Fagbenle as part of the Radio Rookies program (press the play button at the top of the page to listen to the story). Temitayo’s interviews are incredibly honest and nuanced: with a classmate whose boyfriend posted an explicit video of her on the internet, which then got HER in trouble at school; with a group of teenage girls who are mostly unsympathetic to the victims of such cyberbullying (one of them says, “Girls do it to themselves—half the time we can’t even blame guys”); and, most heartbreaking/nauseating of all, with a friend of hers, a boy who went to jail a few years back for emailing a topless picture of his girlfriend to his friends and who is totally unremorseful about it.

OMG IT’S A NEW “OH HELLO”!!! I have spent the past four years pining for more of the adventures of BFFs Gil Faizon and George St. Geegland, two 50-something Alan Alda–worshipping Upper West Side divorcés (played in the way-too-short-lived web series by Nick Kroll and John Mulaney). To promote Kroll Show, which premieres this Wednesday night, Comedy Central just released this video, a clip from Gil and George’s new prank show, “Too Much Tuna.” PLEASE let this be a regular segment—I have missed those dudes so much. ♦