A myth that became my reality.

I met her on my eighth birthday. Flipping through D’Aulaires’ Book of Greek Myths, a gift from a family friend, I was drawn immediately to the image of the blonde girl wearing a white dress and a flower crown, her arms raised in distress as she’s pulled into a dark pit by a bearded, toga-clad man in a chariot. The flowers she’d been picking fall from her hands, and four pigs that happened to be in the wrong place at the wrong time when the earth opened up tumble into the abyss alongside her. It was totally disturbing, but also gorgeous.

I read that book cover to cover so many times I lost count, and developed favorites among its pantheon of gods. I was a bookworm already planning for college in the third grade, so I idolized Athena, the goddess of widsom, who sprung fully grown from Zeus’s head. Even though Pandora, who was responsible for unleashing every human misery upon the world, freaked me out, I could relate—I would have been curious, too, if someone gave me a present and said I couldn’t open it.

But the one whose story I read most often, the one I became obsessed with, was Persephone. Her myth, which in part explains the origins of seasons, was told in three pages of text and four images. Her mother, Demeter, goddess of the harvest, always kept her daughter close by her side, and Persephone’s childhood was spent dancing around meadows with nymphs. Then one day Hades kidnapped her and made her queen of the underworld. Hades’s palace was dismal, full of dead souls and surrounded by a garden without flowers or birds or life, save for a pomegranate tree, which Persephone at first refused to touch, because eating the food of the dead meant being trapped in the underworld forever. Meanwhile, Demeter was so upset over the loss of her daughter that she refused to let anything grow, so Zeus ordered Hades to let Persephone go. But in her hunger, the girl had eaten a few pomegranate seeds, and thus an arrangement was made in which Persephone had to return to the underworld for a few months each year, during which time Demeter grieves and the earth is barren.

I’m not sure why I loved this (admittedly pretty dark) story so much. Maybe it was because I loved stories—like Alice’s Adventures in Wonderland, Peter Pan, and The Chronicles of Narnia—where kids went off to strange worlds and had adventures. Maybe I was trying to figure out why Persephone was made to suffer even though she hadn’t really done anything so bad. Or maybe I just liked her because her name rhymed with mine. 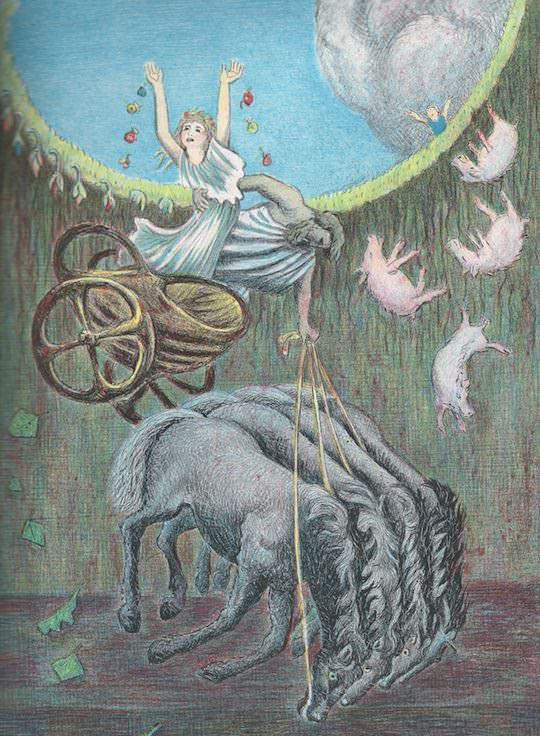 By junior high, all of my books with pictures had been boxed up and handed off to my mom, who squirreled them away somewhere along with my stuffed animals and favorite T-shirts. But I wouldn’t let her take my book of myths (I argued that it was “literary”). And over the years I looked at it a lot. Eventually the book’s cracked spine would automatically open to the page about Persephone, and her story began to take on new meanings for me as I became a teenager. I began to understand how that girl, plunging into darkness with those poor pigs, might have felt.

There were two sentences in particular that grabbed me: “One day as Persephone ran about in the meadow gathering flowers, she strayed away from her mother and the attending nymphs. Suddenly, the ground split open and up from the yawning crevice came a dark chariot drawn by black horses.” It implied cause and effect: Persephone wandered away from the one who watched over her, and then the ground split open.

Like Persephone, I was super close with my mother when I was little. We ate cookies together in her bed. We discussed the books I was reading while she gardened or combed the tangles out of my long, thick hair. Every winter we went to see a performance of The Nutcracker together.

But for some reason, things changed around the time I was in fifth grade. We started to clash over everything, it seemed: She didn’t like the music I was listening to—Madonna was too sexual; Metallica gave her a headache. She was annoyed that I suddenly “needed” to spend so much money on clothes, and told me I was too young to wear makeup. She refused to let me go to sleepovers with friends she didn’t know, or else came up with all these embarrassing stipulations, like having to meet everyone who would be there.

I felt like she was preventing me from having a life of my own, so we got into a massive fights where I would end up yelling or throwing my hairbrush at her. I once slammed the door so hard I cracked the leg of a wooden Nutcracker ornament that she’d given me, which I kept on my doorknob year-round. How’s that for symbolism.

I always screamed that she didn’t understand, but what I didn’t say was that even if she wanted to protect me from danger and/or pain—in other words, from growing up—she couldn’t. She couldn’t replace my best friend who had moved away, or remedy the aching loss that lingered in her absence. She couldn’t do anything about the fact that my friends were talking about me behind my back or that the guy I’d spent an entire year crushing on asked another girl to the dance. I had to deal with the awful feelings of alienation and ugliness rioting inside of me by myself. So when I idly flipped to the picture of Persephone while listening to the radio or talking on the phone, I began to recognize the distress on her face—something was happening to her, something she didn’t choose and couldn’t control, and she realized she would have to fend for herself.

Naturally, high school was its own hell. I saw my friends’ hearts get broken and their biggest secrets spread around school. I saw them harden. Sometimes it was in small ways. Instead of sitting with our group in the auditorium before school or at our usual lunch table, they’d be off in the corner with headphones on, listening to Tori Amos. Some of us, myself included, sought numbness and escape in more dangerous ways, sometimes ditching school to smoke weed or drop acid. We were all seized by forces we didn’t always understand, and forced to cope with them more or less on our own. I even met my own Hades—an abusive boyfriend who treated me like shit, including one time when he refused to speak to me unless I had sex with him.

“Wordlessly, she walked through the garden at silent Hades’ side and slowly her heart turned to ice,” the D’Aulaires’ version goes, and that’s exactly how I went, too. When I landed in the underworld, I accepted it as my fate. I believed that I belonged there; I even romanticized it—I was a victim in this dark place, just like Persephone. I stayed there for a long time. Eventually, I listened to my mother and decided to stop wasting my life. 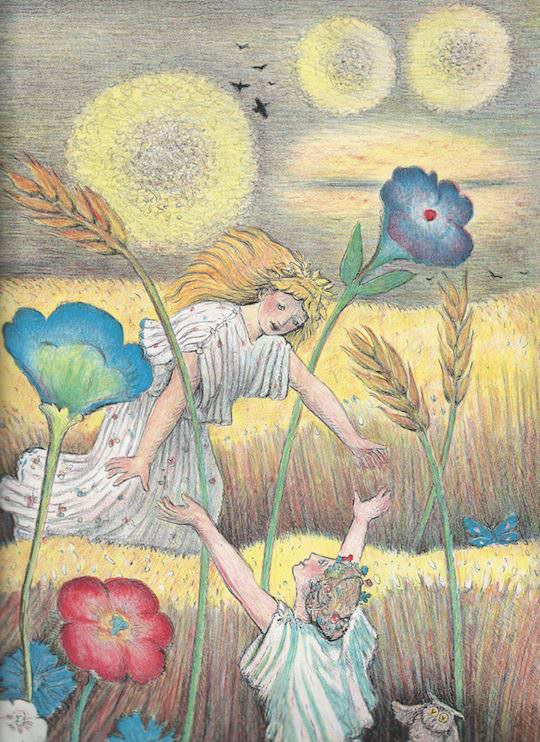 Persephone is “joyful” to leave the underworld, D’Aulaires’ tells us, but it doesn’t talk about who Persephone is after she returns home. I used to have a million questions, like: Wasn’t she traumatized? Broken? Didn’t she live her life dreading her yearly stay down there? There is a description of Demeter hearing Persephone’s “light footsteps” every year, which seemed wrong to me. How could Persephone come back the same bouncy girl she was before? Was there nothing more to her story? I kept reading about her, finding books at used bookstores, reading essays online.

It turns out there are a lot of ways to read Persephone’s story—some people say it’s about the violence of men, others that it’s about the connection between women and the earth, or about loss and grief. But the interpretation that rings truest to me is the most universal: that Persephone’s story is about what happens when you grow up. We all slip from our parents’ grasp at some point. For some of us, this can just mean the awful realization that the people who raised us are capable of making mistakes, and that we cannot keep them by our side forever. Others, like me, have to fall into some real darkness for a while. But those first steps into adulthood are always difficult, and fraught with fresh anguish. We don’t expect to have our hearts broken; when we do, we don’t know yet that they will heal. We make bad decisions, we hang out with the wrong people, we lash out, we get angry and destructive. But we also figure things out. We learn how to cope.

Maybe that’s why we are still light of foot when we resurface from our underworlds. We aren’t the same people, but we haven’t lost our capacity for happiness. As Persephone teaches us, the first fall is the hardest. There will be others, but we’ll be back on our feet so much faster from now on. ♦