Everything you always wanted to know about them, and weren’t at all afraid to ask.

Once Upon a Time 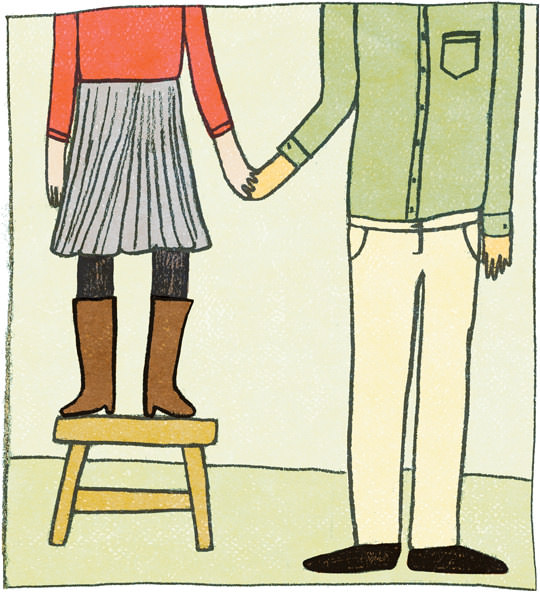 One of the most frequent Just Wondering questions we get here at Rookie is some variation on the following: “I’m a teenager and I’m thinking about dating/am intensely attracted to a person who’s significantly older than me. THOUGHTS?”

Well, as someone who not only has always been interested in older dudes, but has also dated quite a few of them, I have some things to say about your situation, question-askers. When I was 15, I was dating a 28-year-old (cue gasping). Looking back at that relationship now, seven years later, there are so many things I wish someone had told me before I decided to become the Lolita to this guy’s Humbert². That, by the way, is actually a comparison I made at the time, which is so gross to me now. I romanticized a story about an adult man kidnapping, molesting, and raping an adolescent girl. None of that stuff happened to me, but I still wince when I remember how I idealized the thought of someone being single-mindedly obsessed with me the way the novel’s narrator is with Lolita. (Um, probably don’t do this, you guys.)

It wasn’t like I was stupid. At 15 I was smart and self-aware. But I didn’t have enough experience or wisdom (as opposed to intelligence) to completely understand what I was getting into. I thought I was totally prepared to deal with the daily realities of having a boyfriend who was older than me by a decade-plus, which turned out to be less than correct.

Before I get into the real nitty gritty, though, a few caveats. First, being attracted to older guys is completely and totally normal. It doesn’t mean you have “daddy issues” or whatever; that phrase doesn’t actually mean anything, because it can be applied (or, preferably, not) to every person on the planet. Being attracted to someone older just means you are a human person who sometimes thinks other human people are sexy! I mean, I know: some cute college guy who spells his texts properly and actually seems to wash his face (be still my beating heart) can be pretty tough crush competition for the bros in your 10th grade math class. And if there’s one thing of which I’m certain about you Rookies, it’s this: to borrow a compliment frequently expressed to you by your grandpa/kindly next-door neighbor/best friend’s mom, YOU ARE VERY MATURE FOR YOUR AGE. Which means it can sometimes be tough to find things in common with other people who, well, aren’t that way, including potential homecoming dates. So it’s totally fine to moon over people who are older than you! Acting on those feelings, however, is more complicador.

Which isn’t to say that there aren’t plenty of loving, mutually respectful relationships between people with long gaps between their birth years. Not every one of these situations is going to be a soap opera about forbidden love and sexual corruption; sometimes it really is just about two people who really like and respect each other. It’s totally doable, as long as you keep some things (*cough* MY INSANELY WISE WORDS BELOW *cough*) in mind.

My third preface is that this article is, by design, focused on the younger woman/older man dynamic, because that’s what so many of you have written to us about, and it’s so powerful a cultural trope as to have spawned novels, movies, stereotypes, and clichés. And the fact that adults and males have social/cultural/economic/etc. power over teenagers and females adds extra force to the power differential in this kind of arrangement. At some point we’ll do a piece on age differences in queer relationships, but this one is about teenage girls dating older dudes. I’ll use male pronouns a lot for this reason. (That said, most [but not all] of this advice will apply to sexual/romantic relationships involving people of any and all genders.)

Finally, I don’t mean for this article to read as “A HORRIBLE OLD MAN TOOK MY YOUTHFUL INNOCENCE,” because that’s not what happened. I made my own decisions when I was 15, and I enjoyed the majority of the time I spent dating that 28-year-old as well as the older dudes who came after him. But if you’re looking to get into one of these situations, I’m guessing you don’t need to be told about the alluring/fun parts, and if you’re writing to us about it, it’s clear that you are weighing your decision carefully, and not being passively swept away or coerced. And so this article is gonna focus on the not-so-fun stuff—the things I didn’t know or understand back then, and that maybe you don’t now.

So, here are the things I wish someone had talked to me about when I was 15—if they had, I doubt I would have acted on my proclivity for adult men at least until it was legal for me to do so, or maybe I would have just dialed my actions back a little. If you share my teenage (and current) tendencies and decide, after reading all these points, to charge ahead with your May-December romance, no one here is judging you, and I hope it’s a beautiful and positive experience. But maybe within it, you’ll find these points as useful as I would have at your age.

1. Sex with a minor is a crime in most countries.

What this means is that even if the person you’re seeing doesn’t know you’re underage—like, even if you show him or her a fake ID—he or she can face felony charges if someone finds out that you’re engaging in any kind of sexual activity, even if you were a willing participant. So, in addition to potentially messing with your brain, which is obviously what I care about most and what we’ll be primarily dealing with after this point, getting sexually involved with an older person if you’re under the age of consent (which varies from state to state and from country to country) could result in that person’s being sent to jail, which is a pretty serious thing to keep in mind.