My Kind of Guy

I had no idea that being a man would make it so hard to be myself. 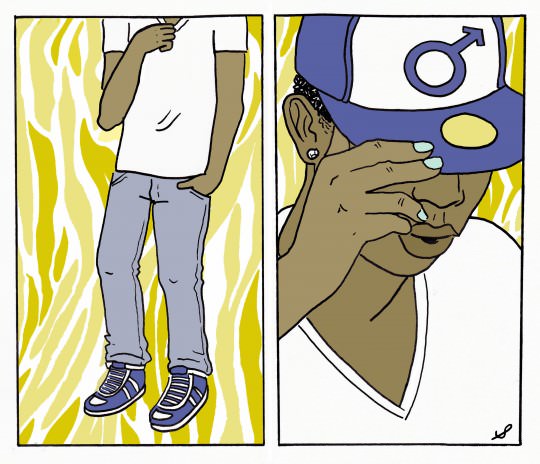 When I was three years old, I told my dad I was a boy. He assumed it was a typical toddler linguistic mistake, but I knew better. I knew I was a boy, and every night before I went to sleep I prayed that I’d wake up with a “boy’s body,” by which I guess I meant a penis, which I didn’t have. I was assigned female at birth, so my father understandably thought I was a girl, as did everyone else but me.

In middle school, that time when everyone’s priorities shifted to looking hot, being cool, and above all fitting in, I tried my best to emulate the girls in my class. I copied their makeup, miniskirts, short shorts, and high heels. I bought a subscription to Cosmo, thinking it would teach me how to act like, feel like, and be a girl.

By high school, I had stopped trying to fit in. I hid under a hoodie and sweatpants every day and never took off my headphones, lest someone actually try to talk to me. I didn’t know it then, but I was depressed—clinically so—and in total denial of the truth I had so clearly understood and proclaimed at the age of three.

Finally, when I got to college, all those years of repressing that truth, of trying to be someone I wasn’t, took their toll. My depression became so severe that I had to reduce my class hours from full-time to part-time, and there were many days when I couldn’t even drag myself out of bed to walk the 200 feet to the dining hall, so I just wouldn’t eat. Even the parts of my life that used to be fun—singing, hanging out with my friends—became a struggle. I knew I had to do something before depression swallowed me whole, but what?

That summer, between my freshman and sophomore years, I got a job as a camp counselor. I was assigned to co-lead, with a male counselor, a group of 12-to-14-year-olds, most of whom were boys. Hanging out with those boys reminded me how I felt when I was a kid. I related with them way more than I did with the girl campers. The boys liked me, but they didn’t see me as one of them—I was the “girl counselor.” I was surprised by how much that hurt. It stung the way it does when someone insists that you’re…anything that you know for a fact that you’re not. As camp wore on, it became harder and harder to tolerate being the “girl counselor.” I developed really intense anxiety and was constantly on edge—when I was told I couldn’t take off my shirt when we went on a field trip to the beach, I became furious.

That was the alarm bell that finally woke me up from my years of self-denial. Obviously I had some strong, significant, but deeply buried feelings about my gender and identity, feelings I could no longer ignore. I started looking up stuff about gender online, and examining my own emotions and memories pretty much constantly. I knew I didn’t feel like a girl, but that still left me a lot of options. Was I androgynous? Genderqueer? Figuring out (or I guess remembering) that I was a guy took a long time, but when I got there, I just knew it was right. It’s hard to explain the feeling—how do cisgender people “know” what gender they are? You just know. And once I knew, I wanted to change my life, to stop pretending to be something other than what I truly am. I knew the only way I was going to stop feeling miserable 24 hours a day was by transitioning.

Transitioning means changing the way you live and the way you present yourself to the world to more accurately represent the gender you identify yourself as. There are lots of different ways to do this. Some people take hormones (testosterone or estrogen) as adults, or hormone blockers for children who want to delay puberty until they’ve decided what gender they want to live as. Others choose to have what’s known as sex-reassignment surgery, in which one’s genitals, breasts, and/or internal reproductive organs are changed, removed, or enlarged. (A lot of people, especially cisgender people, seem to think that sex-ressignment surgery is what being trans* is all about—I can’t tell you how many times I’ve been asked, “So, have you had THE SURGERY?” as though that’s the ultimate goal, the final step to becoming A REAL MAN.) Some people choose a combination of surgery and hormones. Others choose neither and are perfectly content transitioning in other ways, like using a different name, going by a different pronoun, dressing differently, and/or behaving differently in public, e.g., using a different bathroom, going out for the boys’ vs. the girls’ soccer team, etc. How a person decides to transition, and what they are transitioning from and to, are as deeply personal as their reasons for wanting to do it in the first place—and all of them are equally valid.

Physically transitioning via hormones and/or surgery is a long, often difficult process. In the U.S., most doctors won’t give you hormones or perform genital surgery unless you’ve jumped the significant hurdle known as the Real-Life Experience, or RLE. The RLE is a specified amount of time (in the U.S. it’s usually between three months and a year, depending on what you’re asking for, and in some places, like the UK, it can be longer) in which you live as the gender you are transitioning to “full time,” everywhere you go, including in your own house. The RLE usually entails coming out to everyone in your life, name and pronoun changes, and a total makeover designed to help you “pass” as the gender you identify as. (I was lucky with this last part—throughout my RLE I usually passed for a 12-year-old boy.)

In some ways the RLE is well-intentioned: it’s supposed to give a transitioning person and the people in their life time to adjust to their new gender identity, and to make sure they’re not “rushing” into a major operation. But it also functions as a test to see if a person is “really” transgender, and that never made sense to me. What does being “really” transgender even mean? And as for the concern that someone might “rush” into this—I’ve never known a trans* person who had not already spent years agonizing over their identity and researching their options before their first medical consultation. How many people have to prove that they really want a nose job by wearing a prosthetic nose for a year?