A fable with no moral.

Because You Can: Winter Brights 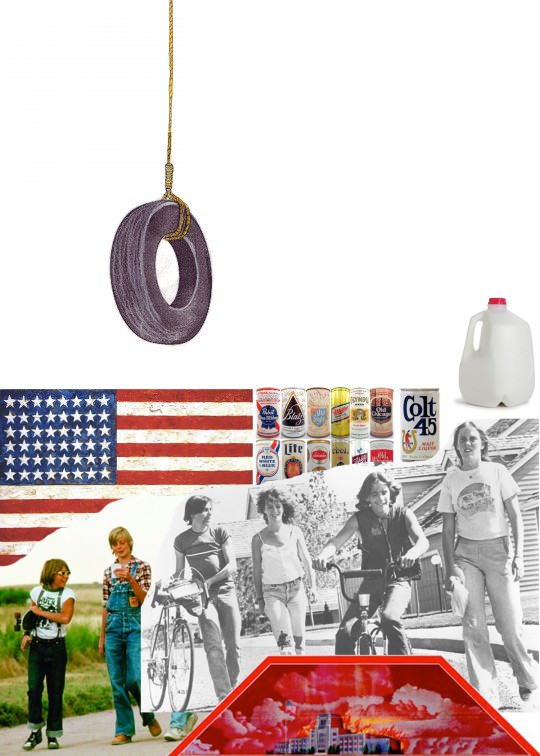 It’s still June and we’re already bored, sitting on Haden’s porch and trying to get some beer. Sam is out of ideas, or just pissed off. Soren used to have a fake but he lost it stumbling home one night, that time he puked on his stepmom’s roses. Ivan found an ID—Robert F. Weiss from New York—but he’s too scared use it, and it hides in his wallet, lodged between a prayer card and an expired condom. I’ve got nothing. They know I’m never going to try anything; besides, no way I pass for 21. I don’t pass for 17.

We’ve been sitting at the table for an hour already. Haden’s tacked an American flag up on the stucco wall the house shares with the neighbors. I’d call it a row house but that makes Haden all touchy. “This is Narberth,” he’d say, “not fucking Philly.” The porch looks out onto the backyard, the tire swing, and the old shed. Sometimes when we get too loud Rita makes us move in there, which is mostly fine unless it’s really hot, or really cold, or there’s more than like five of us. But when we’re good, like when the guys help her do some painting or move some old furniture, she makes us baked goods or buys us beer.

“Why is it that when they’re really nice to you, you find out later she was just really messed up?” Ivan moans, checking his phone.

“Can you focus on the situation and quit bitching?” says Haden, reaching for Ivan’s pack of Lucky Strikes. Ivan’s complaining about some girl who stopped talking to him after he sent her one of his mushy mix CDs. He’d only known her since the beginning of the summer, but he liked to get all fixated like that. But now we knew he was just using her to distract us from the sudden disappearance of Robert F. Weiss.

“I’m not lying, I lost it,” says Ivan. He’s wearing his aviators, so no one can see his eyes.

“Show us your wallet.”

I roll my eyes. It’s hopeless, I know. I was over at his house before this. He was telling me the cops followed him home from a party last night. He was sitting by his bedroom window smoking and looking paranoid, so I said, “Why would they follow you and not do anything? I mean, I know they’re bored but…”

“Listen, Maria,” he said, “you’ve never dealt with the cops.”

I snorted. “Yeah, you’re a real expert.” Ivan shrugged and looked up at the life-size poster of Lara Croft on his wall, blowing smoke at her sweaty bod. I sat on the far end of the bed. I already had one mix CD from him, Euro rap or pop crap, and I didn’t want him getting any ideas. They were like that, you gave in a bit and they want everything.

Ivan gets up and frowns at all of us around the table. “What are you, all alcoholics?” he says. “Can we just chill and decide this isn’t happening today?”

“Do you think Rita would get us shit, Haden?”

“Nah, she’s working. Painting a house in Bryn Mawr for some rich assholes.” Haden scratches his crotch through his jeans. He picks his phone up off the table and starts flipping through numbers. “What if we call Terry?”

Terry is this guy who graduated about five years ago but never moved out of his mom’s house and buys alcohol for kids to finance his smoking habit. Sometimes he’s cool and gives you the booze for no extra charge, sometimes he makes you tip, and sometimes if you’re a girl the tip is a little something extra.

“What about Josh?” asks Ivan.

“No, he really fucking is.”

“Yeah, he really is,” I chime in. Haden nods at me like I’ve got the final say. Soren starts laughing.

“You know what he did? You know he won some kind of…Doritos competition for best science project?” We all stare at him. “Yeah, I don’t know, some solar-powered thing. I heard his mom did it for him or something. I mean, probably not his mom, but someone, and he got the credit. But this was in like middle school, and his face was on all these Doritos bags.”

“I’ve never seen that,” Ivan says, lighting one Lucky Strike off another. He has half-moons of dirt under each fingernail.

“Yeah, but I ate Doritos in middle school.”

“Well, I mean, they probably had different bags there,” says Soren, playing with an empty can. He looks at it with longing, like it’s a friend who won’t forgive him for doing wrong.

“What? I don’t buy that,” I say, sitting back in my chair and pulling up my tank top.

“He’s still got a few hundred bags in his room, I heard. Lifetime supply,” says Soren. “What about Terry?”

“Only if you call him,” Haden says.

“I think Robert F. Weiss should do it,” I say, grinning at Ivan. The day is unspooling before us and I want it to pick up or drop off. I’ve spent too many hours of my life sitting on this porch, swatting mosquitoes, my butt falling asleep. Ivan gives in. He gets up slow and meanders around the yard for a while, working up the nerve to call.

“Nice,” Soren says. Then we all just sit there for about 10 minutes listening to the mosquitoes buzz and Ivan going, “Yeah yeah, yeah no, yeah, sure, where? Oh yeah, yeah cool,” and on like that. He’s kicking the tire swing back and forth with his white sneakers. Finally he gets off the phone and struts back up the stairs to us.

“So Terry is at Penn Valley and he wants us to come there and pick him up.”

“Ugh, why?” Soren groans. He’s the only one with a car right now. Sam’s is in the shop and Haden and Ivan don’t drive, which is why they only chill in Narberth, unless they can get a ride. If I need a ride, I call Max, my sometimes boyfriend.

“What did you expect?”

“D’you know Bam? Apparently he’s going to drink a gallon of milk in a half hour behind the school, and Terry doesn’t want to miss it.”

Sam runs a hand through his thick hair and gets up. “Well, we’re gonna find out.”

Bam is a year older than us, a senior, but he hangs out with younger burnouts and older losers. He’s always doing amusing shit like this for Terry. By the time we pull up, a bunch of kids are crowded around the blacktop behind the elementary school. Bam is in the middle of them wearing a backwards trucker hat. There’s some skinny skater kids on one side of him and two big guys on the other, and one of them is Terry.

Bam sees us and bounds over, hugging Haden and shaking hands with the other guys. He holds out his arms to me so I hug him because I feel bad.

“Just do it already,” says Terry. One hand is resting on his big stomach, in the other he’s got a pink lemonade.

One of the skater kids has four quarts of milk by his feet. He hands one to Bam, who peels off the plastic tab around the cap and takes a deep breath.

“Couldn’t get a gallon bottle,” the kid with the milk says. “That would have been more impressive.”

“He better pace himself.”

The blacktop is cracked into gravel at my feet and the basketball hoop hangs netless. There’s a couple skateboards parked under the tree that was our home base at recess. We’d lean into the old giant’s trunk during tag, or pretend to get kissed behind it. In third grade Soren and I did a project on the black squirrels that lived in its branches.

Bam lifts the quart up to his mouth and leans his head back. At first it looks like he’s faking it but then you can see the milk scooting out of the plastic in waves. A breeze throws my hair in front of my eyes and when I’ve fixed it he’s lowered the quart.