The permanent record is a lie.

The Girl Who Would Be Queen 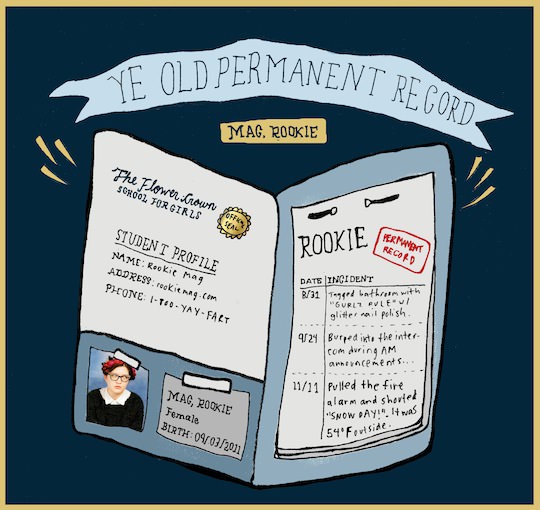 I was in third grade the first time I heard the phrase “permanent record.” My teacher had taped large pieces of paper on a brick wall for us to draw on during art period, and my friend Amanda* and I used thick fruit-scented markers to scribble on the paper, and then the tape, and then subsequently all over the wall. “I’m going to read you the riot act!” my teacher yelled, and it sincerely took me years to realize this was just a saying, and not an actual treatise. “This will go on your permanent record!” I didn’t know what she meant, so I asked my mom about it on the way home from school, and she told me: “It’s a folder where they keep track of you, and everything you do in school, good or bad.” The only thing I knew for sure about good and bad was that no one would be your friend if you were bad, and you did not get to play at recess, and I did not want to go through life friendless and without recess because of one incident involving fruity markers. I was terrified.

For years thereafter, I lived in constant fear of my permanent record, worried that it would keep me from going to college and attaining my dreams. Did my academic achievements mean nothing because I once told my least-favorite teacher that the principal’s office called, and that his house was on fire (incidentally, the worst prank I’ve ever pulled)? Had my chances of attending a good university been significantly diminished when I cut all of my classes to read The Executioner’s Song down by the bleachers?

As it turns out, no. I got a week’s worth of detention for the phone call, no one ever knew that I skipped school that day, and my life carried on, and was even met with a fair share of success. And now that I’m older, I’ve realized that the permanent record is, by and large, a myth.

The threat that anything you do will be subject to eternal scrutiny—that you will be marked for life—can paralyze you with fear. Maybe you failed a test. Maybe you’re having a hard time because you’re depressed or upset, so you talked back in class a couple of times, and now you think you’re pegged as a troublemaker. Or maybe you haven’t done anything wrong yet, but you’re prone to being stressed and nervous anyway, and you’re paranoid that the slightest screw-up will be catastrophic. Or maybe you got bad grades—the report card is one of the most common but most tyrannical manifestations of the “permanent record.” In grade school, you worry about whether your scores are good enough to get you into high school; in high school, you worry about your transcript for college; in college, you worry about grad school or future jobs—and before you know it, it’s like your whole life comes down to a grade, and any aberration or failure will derail your entire future.

Relax! It’s rarely as dire as all that. I have never had an employer ask me whether I got an A in algebra, even when I had a job where I had to do serious math every day. Obviously, it’s important to try your best—a C is a well-earned grade if you worked hard for it—but either way, one disappointing score is not going to result in lifelong destitution. I had a friend who would make herself so nervous about her grades that she puked before every test she took. This kind of obsession with the bottom line can keep you from achieving what you want to in life. Maybe you really like history, but you’re not doing as well in the class as you’d hoped—that doesn’t mean you should avoid taking more classes, because in the long run, you’re way more likely to succeed at something you actually enjoy. Or maybe you’re channeling so much energy into getting that A in English that you neglect other activities and subjects that you have more of an aptitude for. Colleges take into consideration a whole range of factors when determining admissions, and while your grade-point average is definitely one of them, it’s far from the only one. You’re obviously going to worry about your grades, but don’t limit or torture yourself by thinking that being a straight-A student is the only way to succeed. I didn’t get perfect grades in high school, and I even dropped out of college after freshman year. And yet here I am, years later, with a PhD and a job as a college professor. Because I gave myself a second chance to do well, the world did too.

The permanent record ends up intimidating us in ways we might not even realize. I understand rules, and I respect most of them, but sometimes punishments are designed to prevent us from questioning the status quo. When I was in school, anyone caught kissing in the hallway was publicly reprimanded by a teacher and threatened with detention. Personally, I don’t think it’s appropriate to make out in school, but I don’t think it’s grounds for getting in trouble, either. Life requires us to make all sorts of basic decisions for ourselves, and the reasons behind them shouldn’t be primarily rooted in a fear of what seem like arbitrary or inappropriately harsh consequences.

If you disagree with a policy, it might be up to you to voice your objections to authority, and if you do so respectfully and calmly, you might get your point across, or you might get reprimanded anyway—but at least you stood up for yourself. And even in the event that you have no grand philosophy underpinning your decision to cut school just this once, or break into the supply closet and use the gym equipment, it’s definitely not the type of thing you’ll have to tell your boss about three years after you graduate. Time usually lessens the severity of the crime, which is what I learned in the months after my fruit-scented-marker incident, when I still had friends and was permitted at recess.

That’s not to say I think all rules are meant to be broken, or that there won’t be some lasting consequences as a result of certain actions. For instance, plagiarizing or drinking on school property violates ethical and legal codes of conduct, and they’re treated seriously for good reason. Infractions like these can result in suspension or other disciplinary measures, which, depending on your school’s policy, might be shared with prospective colleges. Future employers will keep track of grievances against us, credit card companies will note every missed payment—but we can’t let this consume or define us, because in doing so, we give our failures more weight than our successes. (And, while we’re on the topic, I should mention that if you break the law, your criminal record may need to be reported to colleges/future places of employment if it isn’t expunged, sealed, or made otherwise confidential.)

But even in cases where our decisions haunt us more than we’d like, it’s important to remember that we’re not incapable of rectifying our mistakes, or changing, or moving on, and usually, our transgressions will eventually be forgotten. We almost always have another chance, and let the record reflect that. ♦