It’s fun to watch masters of a sport enjoy themselves without a lifetime of dreams hanging in the balance. 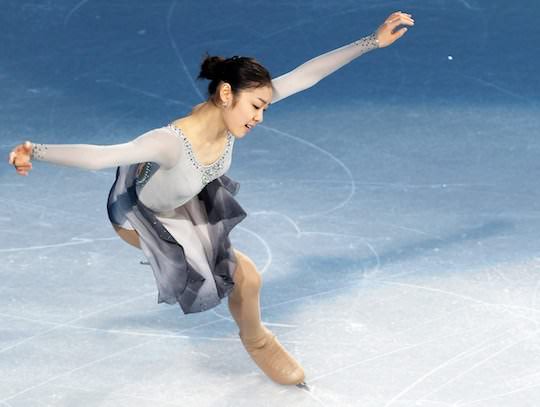 Figure skating is my favorite Olympic event, but being a fan of it is sort of like scheduling a panic attack every four years. There’s so much at stake—one fall, one slip, one triple axel downgraded to a double, and suddenly the gold-medal favorite is in tears on the scoring platform, years of training and months of hype swirling together in a mix of disappointment and disbelief. It’s not an easy sport to watch—the falls look painful, each jump is a risk, and the heartbreak factor usually rates a 6.0, or whatever its equivalent is in the complicated ISU scoring system that I still don’t understand.

But there finally comes a point when the actual competition ends, and that’s when my favorite thing begins: exhibition skating. The four or five highest-scoring skaters come out after the contest and get to perform one more time, in a noncompetitive way. When the pressure to hit certain technical standards—the pressure to score—has been removed, the skaters get to perform routines that are riskier, more artistic, and just fun. These performances usually involves the greatest, tackiest costumes—even by figure skating standards! The exhibition gala is also a chance to see masters of a sport enjoy themselves, which is rare when medals and a LIFETIME OF DREAMS are hanging in the balance. Because the athletes get to do what they love without the stress of ACHIEVEMENT, their performances seem purer, more alive. A few stand out in my mind.

I fell in love with figure skating in 1992, when I was in fifth grade, while watching Kristi Yamaguchi win the gold medal in Albertville, France. She’d won the first gold medal for women’s singles skating for the U.S. in nearly two decades, and her exhibition skate was patriotic and corny and, to 10-year-old me, the best thing I’d ever seen. She essentially dressed up like a contestant in the Malibu Sands Beach Club Miss Liberty Pageant, and she’s clearly (and understandably) thrilled during the entire sequence. Watching her celebrate made me feel like I had won a gold medal, too, and I spent weeks afterward jumping off of the sofas with my sister and yelling “triple lutz!” while twisting my legs in the air.

In 1994, it seemed like the whole world cared about figure skating because of the violent rivalry between Nancy Kerrigan and Tonya Harding. (The Winter Olympics were held in 1992 and 1994 to adjust to a new schedule that staggers the Winter and Summer Games every two years.) Basically, Tonya’s boyfriend tried to take Nancy out of commission by bashing her knee during training for the U.S. Figure Skating Championships. (In the U.S. at least, it was covered like World War III, even though the competitors were on the same team.)

That was the same year that Oksana Baiul took home the gold, and after winning her medal, she performed a routine called “The Swan,” which is so beautiful that it’s sort of like watching a dream, and you forget that she’s on two metal blades as opposed to a pair of ballet shoes. I remember seeing this and feeling relieved—her routine seemed to gently push aside all of the ugliness and creepiness that had surrounded skating since the Harding/Kerrigan incident. And there was something super rad and badass about a ballerina on blades. I was inspired to try to incorporate rhinestones and feathers into my everyday wardrobe (it’s a work in progress).

Oksana also performed an exhibition skate with her mentor, 1992 gold medalist Viktor Petrenko, in one of the corniest routines I’ve ever seen—the music is a medley of family-reunion-ready songs and remixed oldies, and the dancing is parentally “hip,” but you can tell they’re having a lot of fun. And the neon splendor of their coordinated outfits ALONE (especially Viktor’s shirt) is a gift.

Surya Bonaly was almost more exciting to watch in exhibition that year, because she was allowed to do her signature backflip, which was outlawed in regular competition. Here Surya does slip, but she nails the flip, which would be impossible for most of us to do on solid ground and so more than makes up for that flaw.

Exhibition skating isn’t relegated to the Olympics: one of my favorite routines of all time is Johnny Weir’s 2010 Nationals exhibition skate to “Poker Face.” This was the competition where he qualified for the 2010 U.S. Olympic team, and his artistry is so timely and original—you can tell he puts so much effort into creating an experience, and he even slips a few suggestive moves into what is often very G-rated choreography. He was criticized by some people in the skating world, including a pair of French commentators who mocked his costumes and questioned his masculinity, which he addresses beautifully here.

And, of course, there are the World Championships (international, non-Olympic events), which spawn gems like Evgeni Plushenko’s somewhat legendary 2001 performance to Tom Jones’s “Sex Bomb”—a routine that is so hilarious and ridiculous that it might just be the prequel to Blades of Glory. But these events also include performances that are incredibly solemn and sincere, like Michelle Kwan’s skate to Tori Amos’s “Winter” in 1997. This was so weirdly perfect and unexpected, because it seems like a song someone would pick while staring out the window or dancing alone.

Thanks to YouTube, there are about a million other exhibition routines to watch, which is great because otherwise how would we get to see Kim Yu-na, who went on to win the gold medal for South Korea in the 2010 Olympics, skate to No Doubt’s “Just a Girl”? Or “Bulletproof”? Or Beyoncé’s cover of “Fever”? Kim is treated like a rock star in South Korea, and you can totally see why.

Finally, Kurt Browning’s “Singing in the Rain” routine from 1994’s You Must Remember This is beyond fantastic. He glides around the set so effortlessly that you forget the (incredibly difficult) technical aspects involved in what he’s doing, which looks to be skating in water.

It is just a joy, as your 88-year-old neighbor would say, to watch these people really indulge in what they love. These performances are the ones that can spark someone’s interest in (or love of) a sport, making them dream of their own no-rules routines, outlandish costumes, and signature songs. I, for example, might have daydreamed about skating to “I Am the Walrus” dressed as a bedazzled walrus at one point. I know it’s impossible for most of us to actually do these things, but fantasizing about going back to age three to train properly, with the discipline and funding required to do so, is much less fun. In part, we need these routines so we can imagine ourselves out there, smelling the cold, feeling the ice beneath our skates, spinning around in sequins and silk, victorious smiles on our faces. ♦