I thought they were boring, spoiled, and weird. Boy was I wrong.

Friday Playlist: Hanging Out With the White Witch 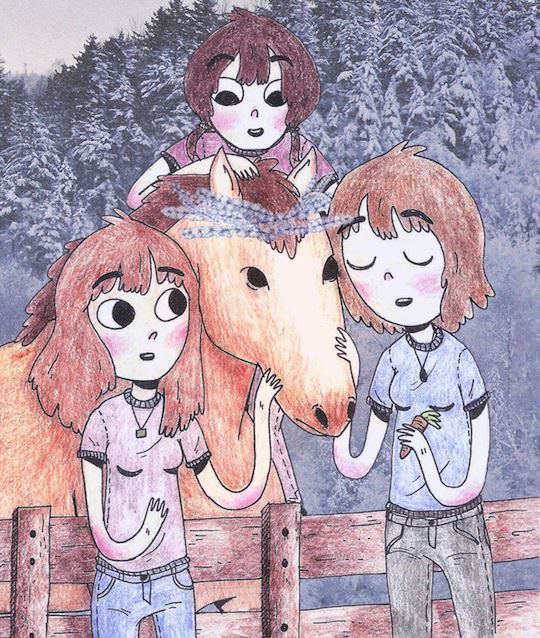 Becky* and I met through church. We sang together in the children’s choir on Sunday mornings and took CCD classes after school for an hour or so twice a week, for about seven years. We were always nice to each other, but I wouldn’t say we were friends. Our relationship consisted of coloring pictures of Jesus and sheep in religious classes; singing religious jams in the children’s choir about the greatness of God (sometimes with tambourines!), and memorizing the Ten Commandments. In all that time, we never really talked about ourselves; she was just an acquaintance that I knew because of our parents’ shared beliefs and proximity. But though it’s been roughly 15 years since Becky and I have been in a room together, I remember her vividly, because she was my first encounter with a Horse Girl.

Horse Girls, as I’ve always understood it, are girls who are absolutely obsessed with horses to the point where horses consume every aspect of their lives–what they read, what they wear, what they watch, and how they relate to the rest of the universe. It’s not essential to own a horse in order to be a Horse Girl (many Horse Girls cling to the dream of a horse, someday), but many actually do own them, and are involved in equestrian competitions; the rest at least go riding, and early on find a kinship with the animals, a relationship that is often misunderstood by others, who find the whole thing to be a bit much (I used to count myself among this ignorant mass).

Becky, I remember, always wore sweatshirts with giant horse faces emblazoned on them, and when she talked in class, she always found a way to bring it back to her horse, whom I never met. She even styled her hair so that it looked similar to the way a horse’s hair hangs: heavy bangs cut bluntly in front, and a long, straw-colored ponytail hanging down the back. I met several other Horse Girls as I grew older, in school and during after-school activities—girls who presented their book reports on Rebecca of Sunnybrook Farm or bragged about their Breyer collectibles—all similarly enthusiastic, willing to talk about their horses for hours on end. To be honest, I found them kind of annoying. Like, we get it! You like horses! All I could see was the obsession; I was blind to the reasons behind it.

Knowing absolutely nothing about life on a farm, or the responsibility involved in owning a horse, or the pleasure of riding horse, or the deep connection one can form with a lovely animal, I assumed that Becky and her cohort must be spoiled brats living charmed lives, like the rich girls on television who went to their stables to ride in between shopping sprees and black-tie galas, and that all of their horse talk was simply showing off. Having a horse also represented a kind of freedom I wished I had—to be able to ride around, to have some type of adventure, to be in a beautiful bucolic setting amongst the wildflowers, as opposed to getting into daily fights with the kid next door over who should be automatic pitcher when the neighborhood crew played kickball. Horses, and by extension the girls who loved them, were graceful and beautiful, and I was a klutz who could barely ride a bike without falling down.

Granted, I was seven or so when Becky and I met, and the closest I had ever gotten to riding a horse was a sad pony ride at a party, where I was plopped upon a tired-looking gray creature who plodded around in a dirt circle at approximately negeative-10 miles per hour. (The “pony” might actually have been a donkey, come to think of it.) When the ride was over, I felt sorry for both of us, and resentful of girls who got to ride real horses, who seemed like mythical creatures to me. I felt like this was my lot in life, to be forever cheated out of the magical experiences that were out of my reach on account of my family’s finances and my own inherent inferiority.

Now, I could have just asked my parents to get me a horseback-riding lesson—one lesson wouldn’t have broken the bank—but to be honest, I was scared that I might not connect with the animals the way the Horse Girls did, that it wouldn’t feel magical at all, which would make me feel even more different from those privileged girls, and not in a good way. So I found contentment in the imaginary, collecting My Little Pony dolls and carefully brushing their electric-green hair. These were attainable and lovable and I could collect as many as my parents would let me, until the next fad came along.

Ignorance can be uncomfortable; rather than do the hard work of remedying it by learning about something new, we humans often take the easy, ugly way out, deciding that this unknown thing is dumb and not worth our time. It can also lead to jealousy—why does this person get so much pleasure from something I know nothing about?—and jealousy, more often than not, turns otherwise decent people into jerks. While I obviously coveted Becky’s horse life, I wasn’t aware of it at the time. I buried my envy deep, and convinced myself that real horses were boring, a trick I used over and over again throughout my adolescence. If I couldn’t have it or it didn’t come easily, it was boring. If it required extra effort or understanding or practice, it was boring. Math was boring, playing an instrument was boring, dancing was boring, dating was boring. “Whatever. Who cares?” I’d say.

When I got to middle school, I realized that I wasn’t the only person who had put Horse Girls in a box—even the term “horse girls” was a common descriptor, alongside “drama kids” and “burnouts” or any number of teen-movie-approved demographics. You’d think I’d have been more sensitive to anyone being mocked or teased, as I was firmly in the nerd camp thanks to my grades, my giant glasses, and that two-month phase in sixth grade where I insisted on wearing a beret to school, but jumping on the Horse Girls just made me feel better; finally there was a subgroup even dorkier than mine. Looking back, I see that the Horse Girls at my school weren’t rich kids; they were farm kids, from more rural areas, who were considered a bit country in my straight-up suburban hallways. Farm life was foreign to most of us, and so it made an easy target. It’s hard to admit that you don’t, at the age of 12, know everything there is to know about everything and everyone. At least not publicly.

I don’t think I understood Becky until I moved to Vermont in my early 20s. As a suburban kid, I wasn’t prepared for the beauty of the landscape, all snowcapped hills and verdant valleys. Cows and sheep became regular sights, as did horses, majestic and beautiful, standing in the fields with their coats shining in the sun. To see them on a near daily basis, to come close to them and recognize something deep and knowing in their eyes, was transformative. I finally began to see what brought Becky and the rest of the Horse Girls to such obsessive levels of regard: it was love.

This also happened to be around the time that my boyfriend and I adopted a retired racing greyhound, who, it dawned on me the first day I saw him standing in our house, looked like a tiny horse, graceful and tall and smooth, with deep and wizened eyes. He is the most spoiled dog in the world, with special winter coats, and special food, and special toys, and special medicines, and it became very evident right away that he wasn’t just our pet, he was our friend. In some ways, he was our kid. I never shut up about him, or greyhounds, or greyhound rescues, or things I’d read about greyhounds. I’m still this way, and Liffey is still my love (though his current love is Rufio, his hedgehog toy). I guess it made me realize that Becky wasn’t bragging—she was sharing. She wasn’t obsessed—she was smitten.

Now whenever I see a horse I get super excited—when Shadowfax came running from the meadow to greet Gandalf in The Two Towers, I cried. I cried! And I’m not even a Horse Girl! Here was this beautiful creature, easily believable as the Lord of All Horses, looking like he stepped out of a Lisa Frank dream, and in a movie populated with all sorts of mythical beings, the horse–an animal that actually exists and shares our space–was the one that struck me as the most magical.

What do any of us do when we fall deeply in love with something? We try to carry it with us wherever we go. We wear a band’s T-shirt or scratch their lyrics on our desks, we tattoo names on our skin, we take a million pictures and post them online for the world to see. Our lives begin to revolve around our loves. Maybe I was never jealous of Becky for having a horse—maybe I envied her having such a strong connection to something, for being in love long before I even understood the concept. I’d had pets before Liffey, but my parents took care of them, and I went through phases of being super into various things, like the aforementioned berets and My Little Pony, before becoming bored and moving on. I was more concerned with myself than with anyone—or anything—else. I don’t think I understood the concept of passion until I developed a better sense of compassion.

Prejudging people based on no facts, but lots of stereotypes, might make us feel more comfortable with our ignorance. But it also robs us of interesting experiences, ideas, conversations, and friends. Would Becky and I have been best friends if I’d taken even a tiny interest in her horse? Maybe not. But at least it wouldn’t have taken me 15 years to look a horse in the eye and recognize that her love was completely normal and honest. Horse Girls seem to understand obsessive fandom and devotion before the rest of us do, and that’s pretty amazing. How could I have derided someone for something so noble as caring for another creature with all of her heart? If Becky’s horse could ever wear a T-shirt, I’m sure it would have her face emblazoned on the front. ♦

* Not her actual name.