Bigger Than the Small Screen

A guide to TV mythologies.

My Kind of Guy

Warning: Spoilers ahoy for many shows including Fringe, The X-Files, Twin Peaks, Buffy the Vampire Slayer, and Battlestar Galactica, as well as The Epic of Gilgamesh!

It’s easy to be cynical about humanity. As a species, we are a blight on the planet and often on one another, and we basically serve no purpose, as Rookie’s favorite astrophysicist succinctly argues here:

And yet it’s hard to quash the vague inkling that our lives surely have some meaning. That inkling is worth investigating, and you’ll be pleased to learn that you can do so simply by watching tons of awesome TV shows. So consider this a primer on how to seek the meaning of life while watching TV all day. A DIY of sorts.

I think the best shows to watch for meaning-of-life purposes are the ones that contain their own mythologies—self-contained universes with their own rules and realities, and mysteries that unfold over time. Most of these are, by definition, genre shows: The X-Files, Twin Peaks, Fringe, Supernatural, and the like. Their worlds are like ours—but different. OR ARE THEY?!? You might actually be surprised by how different they’re not. Because every one of these shows uses tropes that have appeared in stories since the beginning of human existence, back when storytelling consisted of, like, prehistoric people sitting around a fire and chatting about their days. Tropes are ideas that are so deeply embedded in our collective unconscious that we can’t stop repeating them to one another, in every new storytelling medium we come up with. Once you become aware of them, you’ll start to notice them everywhere.

Some tropes you’re probably already familiar with: Rags to Riches. Self-Fulfilling Prophesy. ___ With a Heart of Gold (Hooker, Jerk, Hitman, etc.). The Underdog. The Evil Laugh. Will They/Won’t They romance plots (spoiler: they will). You could argue that these themes keep recurring because we humans are just super predictable. But I like to think that actually there’s a spiritual component at work here, and that these tropes reflect deep mystical truths about our nature.

Take the Evil Laugh, for instance. We’ve all heard it: MWAHAHA, etc.

But have you ever asked yourself why all villains have that same laugh? If the Evil Laugh weren’t essential in some symbolic way, you’d see villains weeping as often as laughing. But like many tropes, it reveals something about humanity—in this case, that being evil will ultimately drive you mad.

You might dismiss tropes like the Evil Laugh as mere clichés—but I think that’s missing the point. A cliché is generally thought of as a phrase or concept that’s so overused that it’s lost its oomf, like saying you love someone “more than life itself” or that something weird is a normal thing “on acid,” or that you gotta cross something off your “bucket list.” Because we’ve heard these phrases a billion times, they don’t feel meaningful anymore. Tropes, on the other hand, are concepts we feel compelled to return to over and over, not because our imaginations are so limited and we’re such boring people, but because they’re meaningful to us. They are the themes of human existence. Their origins are often hard to trace (was there some dude who was the first to evilly laugh?), and they’ll continue to evolve long after we’re gone.

There’s a vast, awesome wiki called TV Tropes where people compile and celebrate tropes from every source imaginable (TV shows, comics, folklore, ancient myth, real life). Using data culled from the site, I put together this graph to compare a group of shows that each make superb hunting-grounds for tropes: 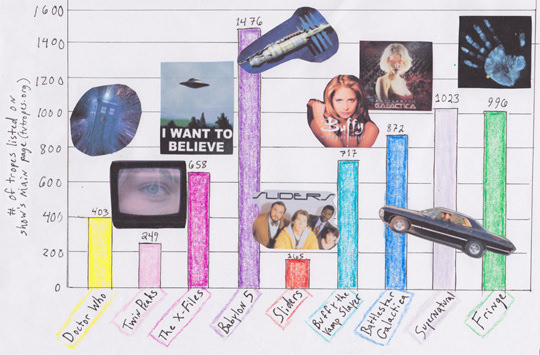 I don’t necessarily mean to suggest that more tropes = better. It depends on how they’re used. Let’s explore a few of the best, shall we? 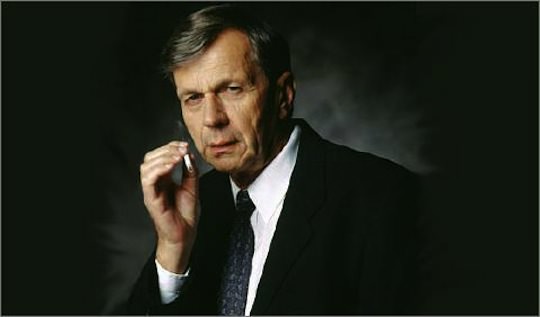 This is a nameless, often villainous person who is mysteriously referred to only by a descriptor, like the Smoking Man on The X-Files. We never know his actual name or identity, nor his precise purpose (besides being sinister and unfathomable). The Adjectival Man (and it’s almost always a man—the Log Lady from Twin Peaks is a rare exception) tends to hold the key to the story’s mysteries, and is something of a mystery himself. The X-Files had a bunch more of these: the Well-Manicured Man, the Gray-Haired Man, the Crew-Cut Man, the Toothpick Man. On Fringe you have the Bald Men; Twin Peaks also featured the One-Armed Man, who was particularly interesting because the secrets he held existed only in his unconscious mind—making the mystery that much more mysterious! 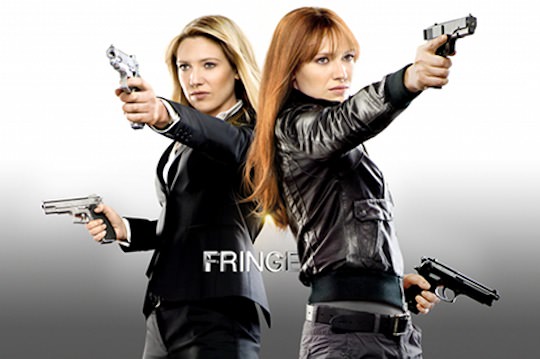 It’s you—but evil! The prime shows for Evil Twins spotting are Sliders and Fringe, both of which involve parallel universes, which means the protagonists are bound to run into their parallel-universe selves from time to time. Of course, their doubles are totally corrupt and nefarious. In the Star Trek original series episode “Mirror Mirror,” the crewmembers of the Enterprise encounter evil versions of themselves, including an Evil Spock (you can tell he’s a bad guy cuz he has a goatee). The Evil Twins trope acknowledges that there’s good and bad in everyone, while also feeding our moral arrogance: if there’s an evil twin, it’s certainly not me. I’m the good one, right? 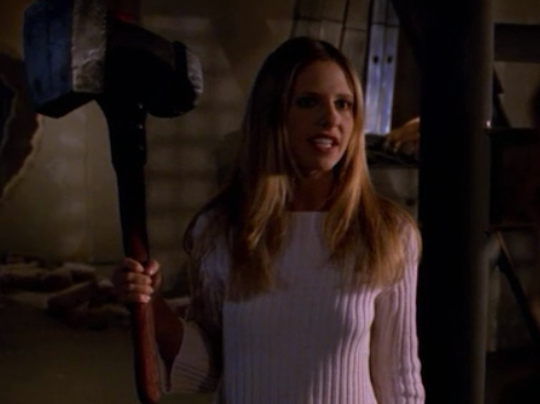 This is when a huge problem is conveniently solved by a sudden and seemingly random power, event, person, or act of God. The phrase, which means “god from the machine,” comes from Greek theater, where gods would be suspended above the stage on a big crane, ready to intercept at any moment. More than half of Euripides’s plays involve Deus Ex Machina, so even if it’s not the most elegant way to wrap up your story, at least there’s 2,500 years of precedent. Today you can see Deus Ex Machina all over the place, particularly in Buffy the Vampire Slayer. Remember in season five when Buffy and her friends spent like 10 episodes moaning and quivering with fear about this supposedly undefeatable god called Glory? And then in the season finale Buffy randomly whips a magical Troll’s Hammer out of her ass and handily beats Glory to death? And everyone watching their TV was like, “Excuuuuuse me?” Deus Ex Machina, my friends. 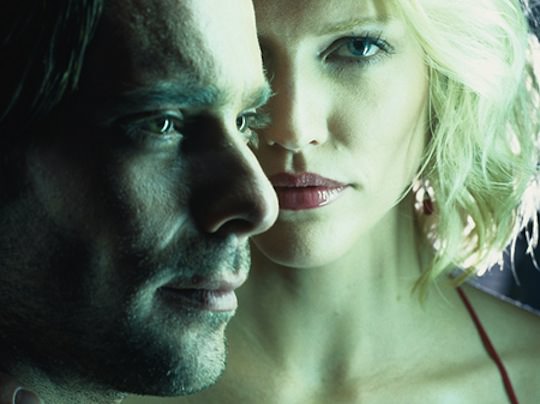 Most real-life love stories are actually kind of a snooze (once upon a time there were two people who met each other and fell in love, and they were compatible and enjoyed each other’s company most of the time, but sometimes they fought, but mostly it was OK so they stayed together till they got sick of each other, THE END). The antidote for this yawnfest? Star-Crossed Lovers: they’re perfect for each other, if only their love weren’t forbidden! Battlestar Galactica seems to have been a prime breeding ground for Star-Crossed Lovers. The sci-fi show (not the cheezoid 1978 version, but the 2004-2009 remake) was about a bitter conflict between people and a mechanical race called the Cylons, who basically attempt to exterminate all of humanity. Naturally, a number of illicit human/Cylon love affairs ensue, the strangest and most romantic being between the brilliant scientist Gaius Baltar and the bodacious Cylon called Six. (Also check out the Pete and Pete episode “Apocalypse Pete” for a funny example of Star-Crossed BFFs.)

You can explore a thousand more tropes on TV Tropes: Badass Bookworm, Blasphemous Boast, Vagueness Is Coming, and Dawson Casting are just a few to get you started). But beware: don’t click on any of those links unless you’re prepared to fork over the next 10 hours of your life. One trope leads to another, and soon you’ll be obsessed enough to call yourself a “Troper” (yes, there are people who do that—don’t judge, they will soon be your comrades).

If you’re a writer, it’s easy to psych yourself out by thinking that everything you write has to be 100% original, and that if you make use of a well-worn plot device you’re a hack. You might also find it depressing to reduce all human stories to set of standards that can be identified, classified, and indexed. But you don’t have to think about it like that! I found a great argument to the contrary from a a guy called “grumblebee” on a Metafilter thread:

I wish that creative writing courses all began by having [students] write translations and adaptions. It would be awesome if writers would spend 10 years doing this, as a sort of apprenticeship, so they’d totally get over this weird idea that writing [is] about “being original” and that “being original” means coming up with a plot that no one has ever thought of before…. People breastfed on Homer, Chaucer, the Arabian Nights, and The Decameròn don’t suffer illusions that they could come up with new plots…. More likely they thought, Wow! What a cool bunch of tools to carry around in my utility belt!

Tropes are tools, people! So work that Evil Twin! Work that Bumbling Dad! The Epic of Gilgamesh, one of the earliest known works of literature (circa 1300 BC), contains a Femme Fatale, an Immortality Seeker, The Ace, and a ton of other tropes that you can find today in an episode of Buffy or The Vampire Diaries, the Harry Potter books, or any of the games in the Final Fantasy series. I love studying tropes because they make me feel connected to three thousand years of human storytelling, and that makes me feel like our stories matter. ♦