Me, according to the people who signed my yearbooks.

Your high school yearbook doesn’t have much to do with you. Even if you had a Max Fischer-like compulsion to be in as many clubs as possible and your face pops up in several different photo spreads, you’re still talking about a book filled mostly with pictures of other people. It’s the comments scribbled by your friends on the inside covers that really testify to your year. The vague compliments, the silly anecdotes, the inside jokes—these are almost always the best record of the connections you made and the things you did.

Looking through my own four yearbooks, I realized something else: they had an interesting reverse-diary quality to them. It was the story of the person I was from ninth to 12th grade as told by the kids that I knew back then. The moments they refer to may not be what I would have considered highlights, but they defined me to other people, whose opinions of me were only sometimes consistent with how I saw myself. On the whole, these kids’ appraisal of me was a lot kinder than my own. 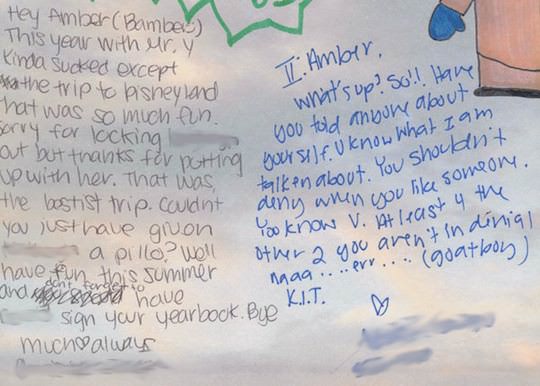 This is the year I established myself as a “good friend.” I got my fair share of the standard yearbook platitudes, but that one made sense. It was my first year in a small parochial high school that that included kids from four or five different cities, only four of whom I already knew. So the vast majority of my friendships were new, and by the end of the year had progressed only to the point where people were comfortable wishing me a “good summer,” not a great one. Honestly, I appreciate that kind of restraint. It’s the yearbook equivalent of not saying “I love you” prematurely. Those who were a little more specific brought up crushes that I’d had over the year, reinforcing the perception I have of my high school self, which goes a little something like: BOOOOOOOYYYZZZ! A buddy from PE class (the two of us spent most of the period performing dueling imitations of the ’90s-era Saturday Night Live character Goat Boy) mentions a mysterious “V”—a crush that, according to her, I was in denial about. 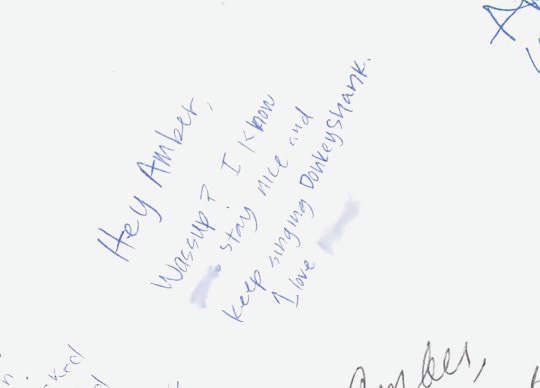 The definitive event of the year, according to at least four signees, was a Disneyland trip, when my band class flew down to Anaheim and performed in the park. It’s actually pretty surprising that I don’t immediately think about that trip when I think about ninth grade, because something odd and definitely noteworthy happened: while we were backstage after our performance, I stood on a table and did an a cappella rendition of “Danke Schoen” in front of my classmates and a group of bewildered local nuns (seemingly placed there by the Fates just to make the situation as inexplicable as possible). It was the act of an attention-seeker with questionable musical taste who’d probably re-watched Ferris Bueller’s Day Off in the weeks preceding. It understandably made an impression on everyone who was there, and it’s why someone wrote “keep singing Donkey Shank.”

I would say at this point in my life I was an extroverted introvert, someone who, at her core, is reserved or possibly even shy, but who also has a strong desire to be noticed or entertain, and so pushes past those inhibitions even though it makes her want to poop. At least that’s how I’m defining it. When I sang that day, I wanted to make people laugh, and that feeling trumped any securities that I had. In my heart, though, I was a withdrawn and perpetually anxious Cameron Frye. 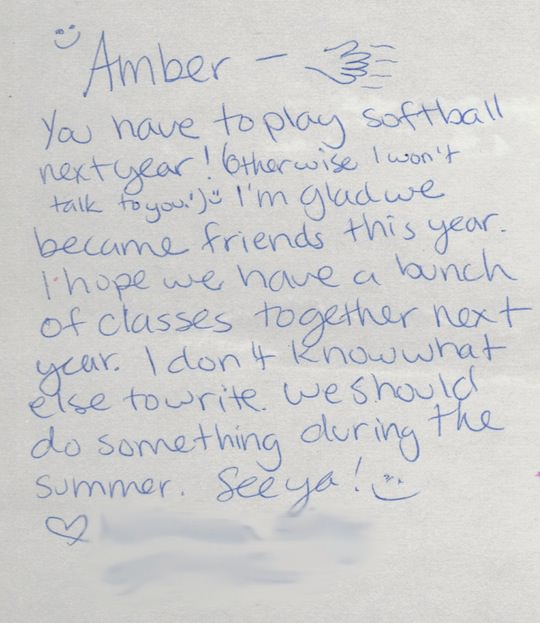 This was when “have a good summer” turned into “we should do something during the summer,” meaning my friends didn’t just ambivalently want things to turn out OK for me during the three-month break—they wanted to be a part of that OK-ness. In 10th grade, anecdotes outnumbered generalizations and people were signing their names with hearts. It was a positive time in my life.

My locker-neighbor, who would become one of my best friends by the end of high school, drew a cute little picture of a hand with lines shooting out of it that would appear to be a reference to teen sorcery but, no, I’m just now remembering that it is a hieroglyph of sorts symbolizing a secret handshake that we’d invented. We’d extend our hands as if we were about to shake but stop short of actually clasping by waving our fingers from side to side in a fluid, undulating motion. I can’t tell you the meaning behind the handshake because, duh, it’s a secret. Also, I can’t remember. But I can tell you that a secret handshake is the most intimate thing that two people can share. 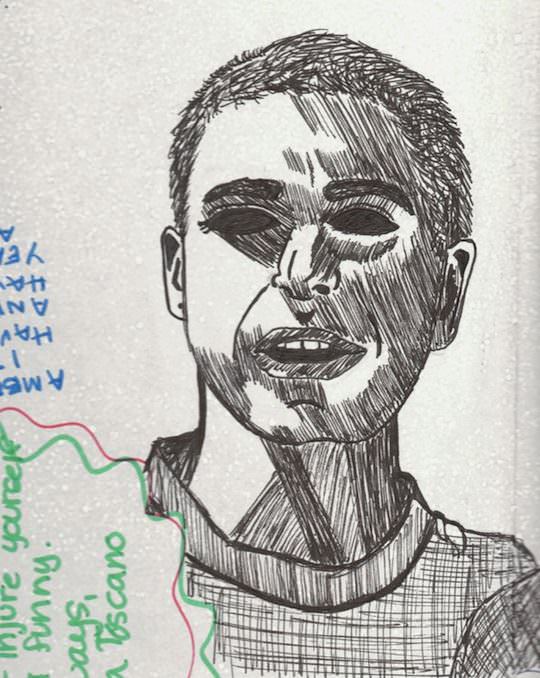 Another close friend drew a picture of the Beastie Boys—a terrific picture, in fact, that captures Mike D’s wonderful nose perfectly. The Beastie Boys were my favorite group in high school (and in life, forever). Theirs was the first concert I went to without parental supervision and I enthusiastically wore their T-shirt to the show, because I’d just turned 14 and didn’t know any better (the last group I’d seen in concert was New Kids on the Block, and the rules were different then). 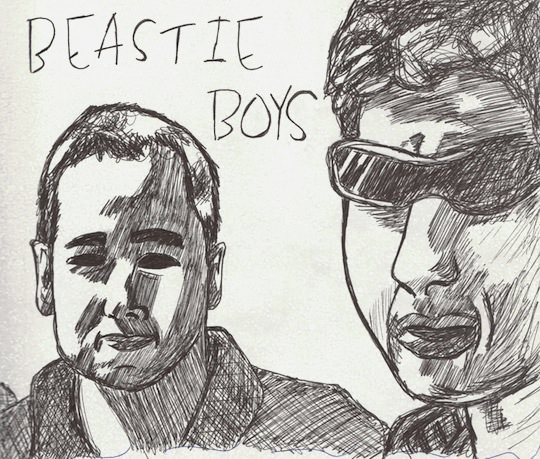 In my mind, the portrait of the Beastie Boys is also a portrait of me, and of the friendship that I had with its creator, because I didn’t ask her to draw it, but she took the time to do it—in fact, she asked if she could take my yearbook home overnight to work on it. Friends get you; they understand what you’re all about—and that’s what I see when I look at that picture. 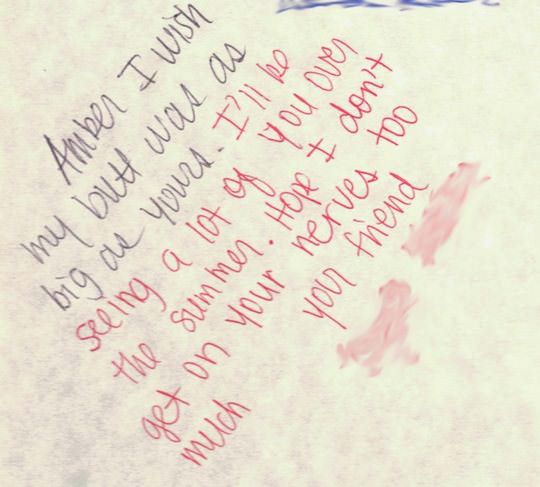 No one phoned it in this year. Everyone kept it really, really real, and that’s why I have several people in this book reminding me of how shitty I was at math, including my Algebra 2 teacher. One friend said, “I wish my butt was as big as yours,” another called me an “Adam Sandler fruit” (I used to incessantly quote Billy Madison). Someone started their comment with “dear Hump 4 free” (my last name is Humphrey and every year, from the time I was in second grade, some brilliant person’s has alighted on that nickname), and one boy called me “sweaty,” though he may have meant “sweetie,” I don’t know. Was I sweaty? At 16 I wasn’t particularly graceful, all of my crushes were unrequited, and I wasn’t cool or popular in the teen-movie sense of the word, but I accepted those things. I could laugh at my foibles and quirks, and I wasn’t above pointing out the foibles and quirks of my friends. All pretense had been stripped from my relationships, and we’d moved from platitudes to razzing. 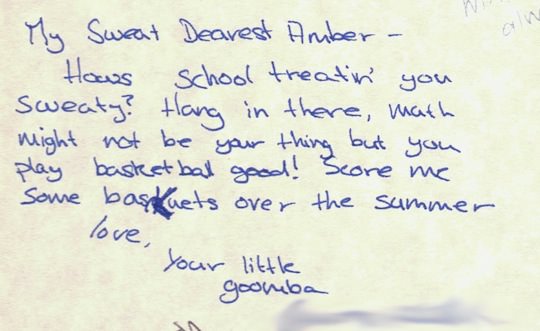 On the other hand, my drama teacher wrote something so unequivocally nice that when I reread it for the first time about five years ago, I cried harder than I’d cried during Bambi, the end of My Girl, and this scene from The Sixth Sense combined. “Drama and comedy…it’s your calling,” he wrote. “Remember the small people when you make it big. Continue to work hard and make people smile. All the best toward your bright future.” This is perhaps the sort of thing that every drama teacher writes, but I actually had some very real plans to “make it big.” Sophomore year, I did a solo comedy bit in the school’s talent show—I’d been such a hit with Anaheim’s nun population a year earlier, it only seemed natural to try to expand my fan base. (The routine was basically a rip-off of something that I’d seen Andy Kaufman do mixed with Molly Shannon’s Mary Katherine Gallagher character.) The summer between my sophomore and junior years, I did stand-up comedy for the first time. Anyway, I gained a reputation as a funny person, or at least someone who fancied herself a funny person, and everyone who knew me knew that my dream was to be on Saturday Night Live. 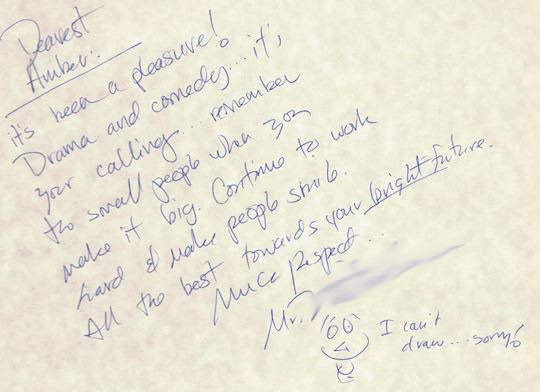 When I reread my teacher’s message five years ago, I was an adult who had not, in fact, “made it big.” SNL was no longer my dream, and I was no longer an extroverted introvert (it’s the “extroverted” part that left; the introvert stuck around). I’d lost whatever bravado pushed me to do things like sing on tables or enter talent shows. I’d finished college and was at a point in my life where I didn’t have much confidence, and all my goals were vague: Maybe I’ll go to Italy. Maybe I’ll work in a museum. I didn’t know what the hell I was doing. And then I read what my drama teacher had written, and I remembered that someone, at one time, had believed in me. This was huge.

I’m still working through my confidence issues, but the one thing I have come to understand is that “making it big” is a totally subjective concept, and success is relative. Like now, for instance, I’d say that I was livin’ pretty large if I were able to pay for health insurance. 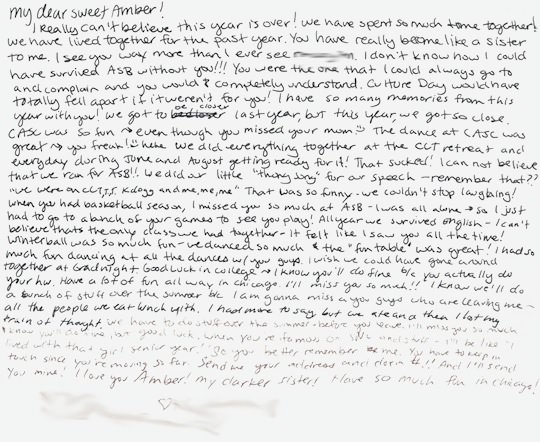 If I’m being completely honest, I’m pretty selfish and grumpy. I’m not uncaring or purposely mean, but no one would describe me as “sweet.” I’ve more or less always seen myself this way. Yet my yearbook is filled with these great, long blocks of love. There are comments like “I believe in you” and “follow your dream,” and then others like “I don’t know what I’m going to do without my fave hump-a-tree.” I appreciate the silliness of that last one, because it mitigates some of the sentimentality that gets me choked up in the others. My relationships had depth at this point, and even though I didn’t see myself in the most favorable light, I was clearly important to these people—some even referred to me as a sister. 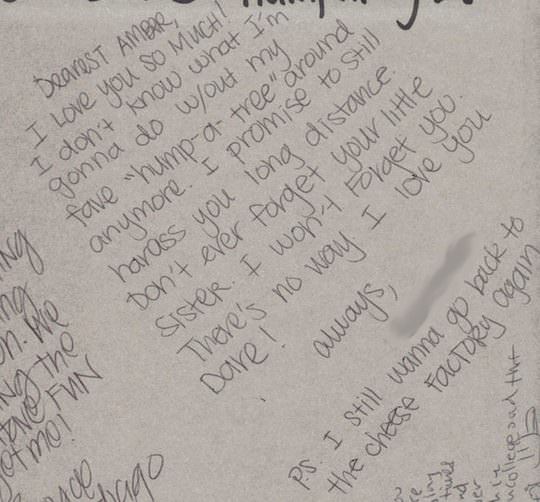 Aside from the occasional “happy birthday” message on Facebook, I haven’t kept in touch with anyone from back then. It’s sad that our friendships don’t always last, but I still feel lucky. High school definitely had its share of thoroughly shitty and/or embarrassing moments, but when I look at these messages, I realize that it wasn’t as bad as I thought. In fact, it was mostly positive: I had these great friends, friends who laughed with me, brought balloons to school on my birthday, and supported me. I only hope what I wrote in their yearbooks is half as valuable to them. ♦