Why Can’t I Be You: Sister Simone Campbell

The Pope called her a “radical feminist” (he didn’t mean it as a compliment). We call her a hero. 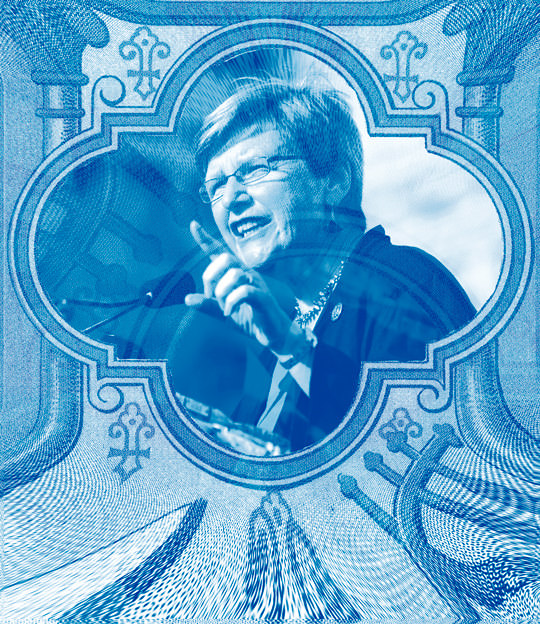 I’ve always been a little bit obsessed with nuns, priests, rabbis, imams, gurus, and monks—folks who make a commitment and a lot of sacrifices to serve a higher power, and their community, according to the laws and morals of their religious faith. It’s pretty inspiring to think about the selflessness and strength that that kind of dedication requires.

Sister Simone Campbell is a living, breathing example of how personal faith can translate into a life of public service. After training to be a Roman Catholic nun in her 20s, she spent 18 years working as a lawyer, representing the working poor of Alameda County, California. She subsequently worked as a professional advocate for economic justice in California, then moved to D.C. to work for NETWORK, a Catholic lobby that raises awareness about poverty and helps shape policy to help those who are struggling. In 2010, Campbell spearheaded the organization’s support of the Affordable Care Act (also known as Obamacare), praising the legislation’s expansion of services to the poor. In April, NETWORK was called out by the Vatican, which claimed that nuns in the U.S. were promoting “certain radical feminist themes incompatible with the Catholic faith.” In response, Sister Campbell funneled the media attention into an opportunity to help people by starting a program called Nuns on the Bus, which had her zigzagging the country to raise awareness about poverty in America.

Ever since she’s been on The Colbert Report and spoke at the DNC, Sister Campbell is very much in demand, so I was lucky to get her on the phone right before she jetted off to Rome, where she was getting a Defender of Democracy Award from the Parliamentarians for Global Action (PGA), an international organization of legislators from governments all over the world. She laughed often while telling me about her incredible career spent helping others.

ROSE: How did you decide to become a nun?

SISTER SIMONE CAMPBELL: I grew up in Long Beach, California. When I was a teenager, in the late ’60s, there had been progress nationwide on civil rights, but there was still a fair amount of discrimination going on in L.A. I went to a Catholic school, and the sisters who taught us really valued civil rights. So I always thought that caring for what happened to those that were left out was part of being a Christian, part of following Jesus and the Gospel.

In college, I got really involved in civil rights sit-ins. I realized that I wanted to do this kind of work with people who shared my reasons for doing it.

Which would you say came first, your passion for helping people or your desire to be a nun?

You know, for me the two are inextricably connected. Because the religious life is about the spiritual journey. And you can only have the spiritual journey if you’re engaged with people around you. Spirituality, for me, isn’t about going off on a mountain and being holy by myself. Other people do that, and that’s their path—but it’s not mine.

At what point did you say, this is how I’m going to be with people and help them? I grew up Reform Jewish so I don’t really know what you’d call it, but when did you…enlist as a nun?

[Laughs] We call it “joining the community.” I did that when I was 18, almost 19. I was so young! In my community you have to do three years of preparation. Then after three years you make your first commitment, which is when you make a promise to live this way. Then you make temporary commitments for a number of years. The total turns out to be about nine years of preparation before you take final vows, which is when you say “forever.”

You keep saying “my community”—that’s the specific community of Sisters of Social Service, right?

When you join religious communities, you pick one, or one picks you. I sort of feel like my community picked me, because it fits so well with who I am and what I do.

Once you started, was there ever a point where you were like, “Oh, maybe this isn’t what I should be doing?” Did you waver?

Oh, of course. It’s actually required. Sometimes we have a tendency in the United States to think we’re always certain. But it’s not true. In order to really make a full, strong commitment to something, you have to have had doubts. Because unless you have doubts you haven’t really considered your choices. I call it “holy doubt.” It’s important to have holy doubt, where you think of other options.

So after you became a nun you went to law school. How did that come about?

I was in Portland, Oregon, volunteering to do community organizing with tenant-rights legislation. We went down to Salem, the capital, to testify about the legislation, and the legislator asked me some question I didn’t know the answer to. I hate power imbalance; I hate not knowing something. I realized if I liked doing that work I needed to get more training—I needed to be a lawyer so I could argue back. That’s what got me into it. Then I discovered I liked practicing law, which was kind of a surprise! So I did that for a bunch of years. I ended up starting a low-cost legal service center, the Community Law Service, which served the working poor in Oakland, California.

When you were working as a lawyer full time, did you still have responsibilities to your religious community?

Oh, sure. The reason we do the work is because of our religious commitment. What happens is—and a lot of people don’t know this—but we put all our money in together. So I was not earning much money in the beginning, and I lived with some of my sisters who were making more. But we were all committed to the same mission, so by putting our resources together we could all do service that was important for people. Does that make sense?

So that point you’d already made your permanent commitment. Did you think you would just continue practicing law, or did you have other goals in mind?

I better explain a little more about how I think about the spiritual life. The spiritual life is all about trying to meet the needs of people around us. And you discover what those needs are by talking to people and also by listening deeply—not just to people, but also in prayer, to see where you get nudged. Meditation is a really great way to get things to become clear.

The law center grew to be more than me—we had six attorneys and six paralegals and support staff. After 18 years, I realized was that my law partners who were not Catholic sisters but were just as committed to the work had taken maternity or paternity leave because they had babies—and that was wonderful—but I never got maternity leave. So they gave me time off. And I realized that the law center was like my child in a way, and it wasn’t ever going to go away to college. And I was going to kill it with my strength…how can I explain this? Our strengths are also our weaknesses. It’s important to get other leadership skills so things can continue over time. So I decided I needed to do something else.