Saturday Links: Our Hearts Go Out to Newtown Edition

Sending love to anyone who has ever been hurt by gun violence.

Jenny
Our hearts are broken because of what happened in Newtown, CT, yesterday. We in America need to talk about gun control. The current laws are not protecting the most vulnerable among us. Let’s petition Congress now and always until it happens.

Because if we don’t talk about gun control now, as this Slate article asks, “could you just let us all know: when would be a better day?”

Here are some really scary facts about guns and violence in America.

And if you have something you want to tell the leaders of this country, here is link to send your message to President Obama and the White House.

Danielle
The Brady Center to Prevent Gun Violence, named for the press secretary who was seriously wounded during an assassination attempt on President Reagan, is a grassroots organization that works for gun legislation in an effort to reduce gun-related violence. It’s a great place to get informed, make a donation, or find out if you can help any local groups in your area.

Stephanie
Cure Violence, formerly known as CeaseFire, is an organization that started in Chicago, which is my hometown as well as President Obama’s. When Obama spoke about the Sandy Hook tragedy he mentioned the gang and gun violence that plagues Chicago and so many urban areas. Cure Violence takes the approach that “violence is like a disease and can be treated like one.” I truly hope that organizations like this one can make our streets and neighborhoods safer.

Connected to Cure Violence/CeaseFire are the Interrupters, a group of people who use their past experience with violence to mediate current conflicts. You can learn all about the approach in this film, which aired on Frontline earlier this year. One of the documentary’s subjects is Ameena Matthews, who is the daughter of a famous gang leader and was a gang member herself. Now she is one of only two female Interrupters in Chicago.

Anaheed
If you’re looking for ways to more directly help the families in Newtown, consider donating even $5 to one of these organizations:
The American Red Cross: Immediately after the shooting, the Red Cross supplied the hospital closest to Sandy Hook Elementary School with blood, platelets, and plasma; they are currently providing food, water, and counseling to Newtown families and first responders.
Newtown Youth and Family Services: This nonprofit health clinic is offering free emergency counseling to the local community all weekend. All donations will go directly to the people affected by the tragedy.

(And while we’re thinking about gun control, let’s also talk about improving access to mental-health services in this country.)

Arabelle
Shinji Moon is my favorite contemporary poet. She’s also around my age, which makes me like her even more. She wrote this really beautiful, moving poem about the tragedy. It resonates with me so much that it brought me to tears.

Tavi
Do you love LOVE? Then you are going to cry big baby HAPPY tears at Buzzfeed’s photos from Seattle’s first day of marriage equality.

I’m sure you guys already heard about this, but in case ANYONE hasn’t: a monkey dressed in a winter coat was found alone inside an Ikea and that’s really all you need to know.

The New York Times also put up this beautiful video gallery of 13 actresses who especially killed it this year:

I think Elle Fanning, Quvenzhané Wallis, and Rebel Wilson were my favorites.

And here’s a self-esteem boost for humankind: according to Nicholas Kristof of the New York Times, people are smarter than they used to be. Yay!

Emma S.
Every December, the literary website The Millions runs a series called “The Year in Reading,” and it’s always amazing. Scores of writers send in their lists of books they loved in the last year, regardless of publication date. One of my favorite entries so far this year is Chris Ware’s, all about reading Laura Ingalls Wilder with his daughter.

Rachael
I live in Washington, D.C., so I’m surrounded by politics. And despite all the important world-changing decisions that happen here, most of what goes on behind the scenes is an awful lot like high school—a lot of pettiness, bickering, and popularity contests (heck, most of that’s not even behind the scenes). That’s why this Mean Girls of Capitol Hill meme KILLED ME. Congress and North Shore–how has no one made this connection before? 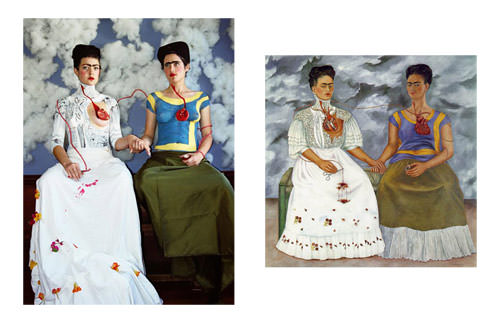 Last year Booooooom, one of the coolests art/design blogs on the internet, teamed up with Adobe for “Remake” project. The submissions–quirky but clever photo remakes of masterpieces—drew inspiration from sources as diverse as Yahoo News and the MoMA. Now the project is going to be turned into a book. This week a new call for submissions was announced, so pick your favorite painting, grab a camera, and go down in art history.

Jessie Ware is a British singer whose vocals you might recognize from some of SBTRKT’s best loved tracks. She just released her debut album, along with this charming video. I came across it while sneezing miserably in bed with a flu, and it was like a combination of chicken soup and a three-hour-long marathon of cute cat videos rolled in one (I know because I have tried both in the last three days). ♦