Saturday Links: Back to McKinley Edition

Sam Weir got so buff.

Sunday Comic: Light As a Feather

This week gave the world two of the best holiday-themed videos of all time. The first is Olivia Newton-John and John Travola’s completely terrifying new atrocity, and the second is Mariah Carey and the Roots and Jimmy Fallon, which is basically Love, Actually condensed into a two-minute clip. Warning: both will probably make you cry. The former because you will be laughing so hard and the latter because your Scrooge-y soul has just melted.

Gabby
Remember how I wrote about my frustration with the Easy-Bake Oven? Turns out I am not alone! Thirteen-year-old McKenna Pope has started a petition for Hasbro to change the way it markets the toy. After her little brother asked for a dinosaur and an Easy-Bake Oven for Christmas, she was shocked to find zero boys in the product’s packaging or advertisements. She’s asking the company to make the toy more gender neutral because, after all, baking is not just an activity for the ladies. I wish McKenna and her brother all of the dinosaur-shaped cookies in the world! Let’s just hope Hasbro listens and this doesn’t end up in another QueasyBake Cookerator disaster.

A smart person made this fantastic animation to accompany Rookie hero Neil deGrasse Tyson‘s answer to the question of the point of the universe. I love him and all he does because although his work is a consistent reminder of how tiny we are, I am always left with a feeling of satisfaction and purpose when I listen to what he has to say. Oh also he is doing the remake of Cosmos soooooo make sure you make no social plans for the time of its release.

2012, PLEASE don’t be the end of the world, because Fleetwood Mac just announced that they are starting a tour in April and I am freaking out!! Lindsey Buckingham says it will be 75% Fleetwood classics and 25% unexplored stuff and hopefully a portion that’s just him and Stevie onstage. So BASICALLY the perfect combo for any fan. My heart is already aching.

I wish Modess was not the name of a sanitary pad because then I could use it to call Shirley Kurata the MOD GODDESS she is. In this House of Style clip, she muses about the delight of getting dressed and gives a tour of her absolutely joy-inducing closet.

Caitlin
Congratulations to Elizabeth Price, who just won the Turner Prize, a very prestigious annual award presented to a British visual artist under the age of 50. Price’s video art uses archival images, text, and music to explore the relationships between humans and the objects they consume. I’m very pleased she’s making points about how important art is in education, especially with the EBacc (England’s new testing system that is resulting in cuts in creative subjects). I’m sick of art, design, and drama being regarded as nonacademic. The more people stick up for them, the better!

Hazel
Like many other people, I am a little obsessed with Claire Boucher, also known as Grimes. Her music is BEYOND and I just want to know as much about her as possible. Rookie’s own Jessica Hopper recently did this interview for Spin, and it’s Boucher’s best interview ever. She opens up about her youth, feminism, her relationship to the internet, and more. Definitely required reading.

Wanna smell like ’za? Pizza Hut has a perfume. Apparently it smells like “freshly baked, hand-tossed dough.” Are you vomiting right now OR jumping for joy?

This is my favorite Christmas song–or should I say DMXmas song, har har–so far this year. As my friend Ahmed, who played this for me (thank you, Ahmed!!), said, “DMX is the only dude that can make this song sound scary.”

Rose
According to surveys, 40% of homeless youth in the USA identify as LGBTQ. Rachel Aviv’s epic and heartbreaking piece in this week’s New Yorker is an intimate, must-read account of what it’s like for a few of those teens to live on the street. Read it and weep. 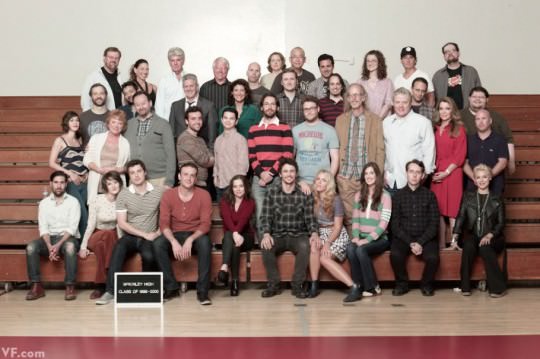 I realize it would’ve made no sense, but when Vanity Fair got the entire Freaks and Geeks cast together for the first time in 12 years, I wish they’d also had the foresight to shoot another episode. (How awesome would it have been to flash-forward to 1992?) But since that couldn’t happen for lots of logistical reasons, not the least of which are that John Francis Daley’s muscles make it almost impossible to remember him as little Sam Weir, I’ll settle for watching this video and obsessively poring over the photos from then and now (the actress who played Cindy looks so different, and where is Ben Foster?). It’s cool how many people from this show really made it–Jason Segel, Busy Phillips, Seth Rogen, Lizzy Caplan, James Franco, Martin Starr–but the best part is seeing everyone together. After graduation (and series cancellations), it’s pretty much a guarantee that the same group of people will never be in the same room again, and as Judd Apatow says, this is probably the last time for the F&G gang. Maybe that’s how it’s supposed to be. Maybe the ending we got was just perfect. Regardless, I like thinking of Lindsey and Nick and Haverchuck and Millie as real people who carried on after we stopped watching them, and for the moment, looking at these photos, I can pretend that’s true. ♦