Rethinking the appeal of tortured romance. 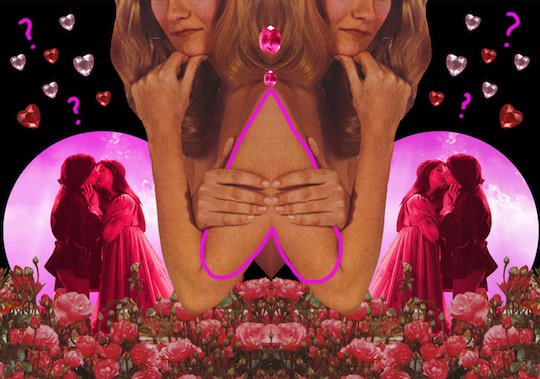 The first time I thought I was in love coincided with the first time I had sex. The year before, I had written in my diary: Ellen* let Mitchell touch her boobs, and now she thinks they’re in love. Um, that’s not love, that’s called he likes touching your boobs. But when it happened to me it was called love—real love that spun me on my feet. I was 15 years old and I swore I wasn’t the type of girl who confused sex with intimacy. My need to be around him was as real and urgent as my need to eat or sleep or shit, and yet I was hardly doing any of those things. I was just needing, needing, wanting, needing, needing, wanting, pining, needing, wanting, pining, crying, needing. We weren’t officially boyfriend and girlfriend, but for three years, we were somewhere excruciatingly in between. It was so physically painful that sometimes I could not get my body from the floor to my bed.

This did not seem strange at all, though. Love was supposed to be painful. Because if it wasn’t, if it didn’t make you breathless and fearful, if it didn’t swallow you into the depths of its belly, spit you out, and leave you shivering and ecstatic, then it was something else. It was the kind of boring love that depressed me and was everywhere. It was the love of married people and their boring, married lives. People like my parents weren’t in love, I told myself. In high school, I was convinced that I saw my mother naked more times than my father ever had. When we went on vacations, my mother and I shared a bed and my father slept on a cot, and I often wondered if she preferred sleeping next to me. Their marriage looked more like a business partnership, whereas love was thinking there was someone in the world who completed you, and without that person we were all just half a being.

These ideas didn’t come from me. I had read Plato’s Symposium the summer before junior year, and he said that human beings used to be completely round, but because we were too wicked, the gods cut us in half, and so we spend the entirety of our lives looking for our other half. The most important figure of Western philosophy told me that love made you whole.

While I was in the early throes of my does-he-or-doesn’t-he-love-me drama, I started to notice couples at school who made too much sense, like each person was super good-looking so of course they had to date. I felt sorry for them, because they would never know what it was like to love someone so much that it wrecked them. That was the kind of love that my favorite musicians sang about. That was the kind of love that was talked about in movies and TV shows, where people said things like, “You’re so beautiful, it hurts to look at you.” Or: “I can’t live without you.” Or: “I could die right now…I’m just happy.”

So die. So don’t live. So stop loving that person if it hurts, I was tempted to say. But I didn’t really believe that. Instead, I thought: I want someone to say that to me.

When he went to study abroad in Japan, we talked on the phone every day for hours. The only thing that cheered me up was knowing that he was as miserable as I was. Except sometimes he wasn’t. Sometimes he was happy, or at least engaged with the world and content to live his life in the present instead of looking back at the past, to a time when we spent an entire semester holed up in his dorm room. Those moments killed me. I didn’t understand how he could feel anything but depressed without me.

“He should miss me so much that he literally wants to kill himself,” I said to my friend. “Just kidding.”

“You don’t sound like you’re kidding,” my friend said.

Maybe I wasn’t. I could only think of two of the most tortured lovers in literature. I remembered reading Romeo & Juliet in high school and thinking, To be separated from your love is nothing short of death. There’s the part when Romeo sees Juliet for the first time, and she’s so stunning that he falls in love with her right away. He says, “Did my heart love till now? Forswear it, sight! For I ne’er saw true beauty till this night.” Yes! I thought. That’s how it’s supposed to be!

I once asked a boyfriend in college about this girl he was obsessed with during his freshman year. She broke his heart, and he talked about her until she possessed mythical importance in our relationship. He told me he had never loved anyone like he loved her.

“Thank you,” I said. “I look forward to it.” I will strangle you in your sleep, asshole, I thought.

It became a game after that—if a guy didn’t declare that he was in love with me within a few weeks, or even better, a few days, then I wasn’t interested. If you really loved me, I thought each and every time I started dating someone new, then you would have known it the minute you laid eyes on me.

But you know what? When I thought about it, Romeo and Juliet’s relationship—if you can even call it that—was pretty disturbing. Within less than a week, they profess their undying love to each other and get hitched. Juliet delivers her famous “parting is such sweet sorrow” line, and the next time Romeo sees her, she’s unconscious from a potion that was designed to work for 42 hours, just enough time to trick her family into thinking she’s dead so that she won’t have to go through with the arranged marriage to Paris. Romeo, with whom she has had about three conversations, was supposed to find her alive and whisk her away to a life totally cut off from her friends and family for all of eternity. GOOD PLAN.