I’d waited my whole life to discover her. 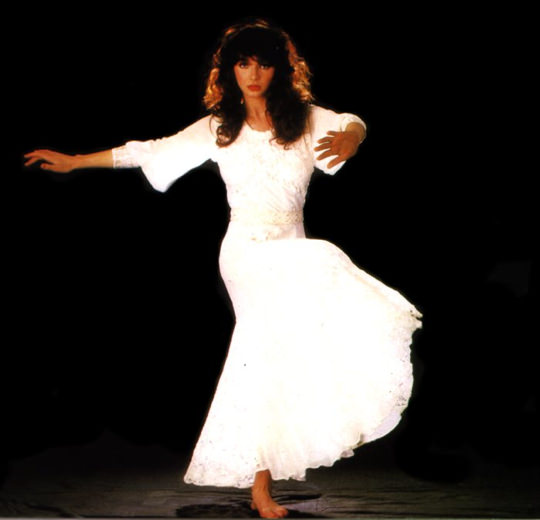 It’s a beautiful thing when you find an artist it seems like you were waiting your whole life to discover. I stumbled upon Kate Bush relatively late in the game, by way of Tori Amos (an entirely other post), because Tori was compared to Kate time and time again in magazine articles and reviews. It was 2003—exactly 25 years after the release of Kate’s debut album—before I finally got around to downloading a song of hers.

I started with “Wuthering Heights,” her first single, which had been a chart-topper in Europe, but was not as well known in the States. I was 22, a college student living in my first actual apartment, and after I listened to it, I couldn’t get Kate’s intoxicating, witchy, high-pitched wailing out of my head. This was my new soundtrack. (If you’ve heard this song, I’m preaching to the choir, but if you haven’t, do so now, and congratulations. Your life just became a whole lot more magical.) As you might have guessed, the song was inspired by the Emily Brontë novel of the same name, and it’s probably the best example of what I think makes Kate Bush so supremely special: the specificity and intensity of her lyrics. She doesn’t just loosely reference the book—she actually channels the (spoiler alert!) ghost of Catherine Earnshaw by addressing Heathcliff in the chorus, which is so nerdy and awesome and weird. I officially fell under Kate’s spell.

I soon found a VHS copy of her music-video collection, The Whole Story, on eBay, which takes her idiosyncratic style to a whole new level. (I mean, male dancers wearing an assortment of goat horns and dunce caps for no real reason? What goes on in your beautiful brain, Kate?) Unless you happened to catch her on her one and only tour in 1979, which you didn’t, these videos are the only way to really experience Kate in all her performative, peculiar glory. Here are my five favorites:

Are you still alive? I know, it’s a lot to take. Kate’s intense facial expressions and the hilarious late-’70s special effects totally confirmed her place in my heart. One of the reasons this video is so enchanting is Kate’s background in dance AND, yes, mime, which is perhaps not a surprise given how expertly and unabashedly animated her moves are here. Actually, “Moving,” the first track from her debut album, The Kick Inside, was reportedly written for her mime instructor, Lindsay Kemp, who also worked with David Bowie. The record also includes some whale sounds, just in case your current musical rotation is lacking in whale sounds.

This incredibly dramatic and gorgeous epic is sung from the perspective of a fetus affected by its mother’s exposure to nuclear fallout. It comes from the 1980 album Never for Ever, which I cherish for its dreamy cover art and the cartoon-fairy-kingdom sound of “All We Ever Look For” and just the strange surprises of Kate’s inspiration. “Egypt” tells of falling in love with a foreign country (please don’t miss this video), while “The Infant Kiss” is a story of a governess who finds herself attracted to a child in her care: “I’ve never fallen for a little boy before / No control.” (But don’t worry, the child in question is possessed by an older, presumably of-age male soul, so…)

In college, my friends and I would put on this video and synchronize our dance moves to those of Kate and her troupe of background dancers, all of whom appear to be the moon (but the song is about the abuse of Aboriginal Australians and the desecration of their land). Anyway, I highly recommend trying this—you’ll become a pro at undulating your shoulders like a sea creature, which is useful—and I also recommend listening to the full album, because The Dreaming is my personal favorite. Kate apparently refers to it as her “gone mad” album (which, in the context of her delightfully nutty repertoire, is really saying something), and the moodier subject matter includes the Vietnam War, The Shining, and Houdini. The highlight for me is “Leave It Open,” in which Kate sings “we let the weirdness in,” a phrase she recorded backward so that it could be played forward (aka backmasking) for an ultra-possessed vibe.

No big deal, just the story of psychoanalyst Wilhelm Reich and his actual rain-making machine, starring Donald Sutherland as Reich and Kate Bush as his son. (Reich also came up with the idea of an orgone energy accumulator, which is a little too complicated to explain.) This amazing song comes from Kate’s popular album Hounds of Love, which is comprised of two distinctly different and equally beautiful suites: the first side of the LP features pop hits like the title track and “Running Up That Hill,” while the second side, “The Ninth Wave,” feels sort of like being woken up by ghosts at dawn in the middle of the woods. It’s awesome.

I have to include this video, because the idea of the military conspiring to create a sound so horrible that it can kill people is effed-up and strange and maybe not even that far-fetched. The video dramatizes the whole thing beautifully, and includes some cameos by British actors (yes, that’s Hugh Laurie from House). This track appeared only on Kate’s greatest-hits collection, which is also called The Whole Story. Normally I wouldn’t recommend starting with a compilation, but The Whole Story was her first album that I heard in its entirety, and it did the trick.

I know I’m hardly alone in my intense love of Kate; her legacy is everywhere. Bat for Lashes and Florence and the Machine owe her a lot, and Big Boi from OutKast is obsessed. Plus, she is still putting out great albums to this day; plus, there is her ONE AND ONLY tour, which you can find on video; plus, there’s her 1979 Christmas special OMG! She’s timeless. And you know what? The best thing about getting into Kate Bush is discovering each and every one of those jewels for yourself. ♦

Erika Wilder is a poet and writer from Seattle. She currently lives in New York City and loves linguistics, cereal, and witches.