Frida Kahlo is probably the most famous female artist in the history of the world. She transcended everything—her time (the first half of the 20th century, not exactly a time of great opportunities for women anywhere), cultural norms (her work dealt explicitly with taboo subjects such as abortion, miscarriage, gender inequalities, and the personal and sexual lives of women), feminine beauty ideals (not only did she not remove her unibrow or faint mustache, she was known to darken them with a black pencil), and her own physical limitations (she had polio as a child and was severely injured in a bus accident as a teenager). In an oppressive and repressive political and social climate, she was an outspoken leftist, a feminist, and a fighter for equality. Her life was bound by strictures of all kinds, but those limitations seem, paradoxically, to have granted her the freedom to live exactly how she wanted.

I can’t remember a time when I wasn’t in awe of Frida Kahlo and her artwork, which somehow always made me feel weird inside—haunted, but also like I was getting a secret glimpse into the life and mind of a person, a spirit, unlike any other who ever lived. Her paintings are mostly self-portraits, and it’s a testament to her genius that she was able to say so much in so many different ways with that one subject.

It was her eyes that first drew me in. In her paintings, she’s always looking at you, and you know that she was staring right into her own eyes, too, as she painted. I think Self-Portrait With Monkey (1938) is the first one I fell in love with: 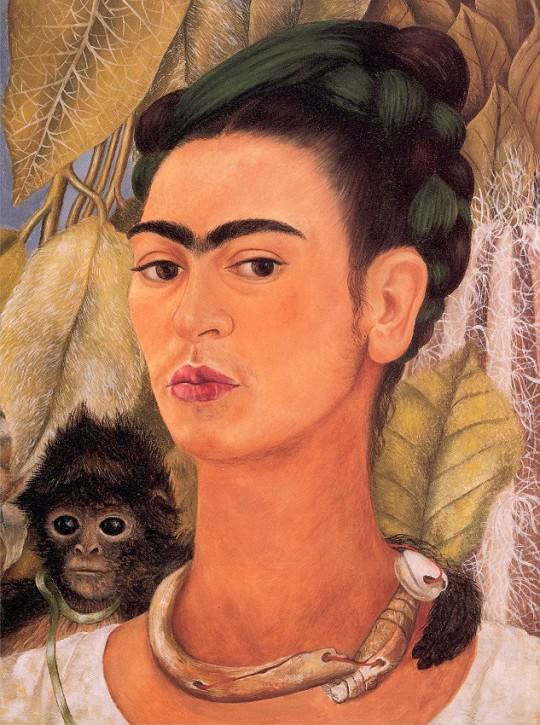 Sure, I was a child when I saw it, and I was probably like, “Hey, monkeys are cute!” But I am still struck by how, in such a seemingly simple composition, there’s so much going on. There’s her necklace made of bone, the jungle leaves behind her—and that monkey. In the painting, woman and primate are both staring directly at the viewer, but the monkey’s gaze is more sympathetic—more human—while Frida’s cold stare and pursed lips suggest she’s ready to take on whatever life throws her way.

Or maybe it was My Birth (1932), which shows Frida’s infant head crowning from the vagina of a woman whose head is covered with a sheet, so we can’t determine her identity. 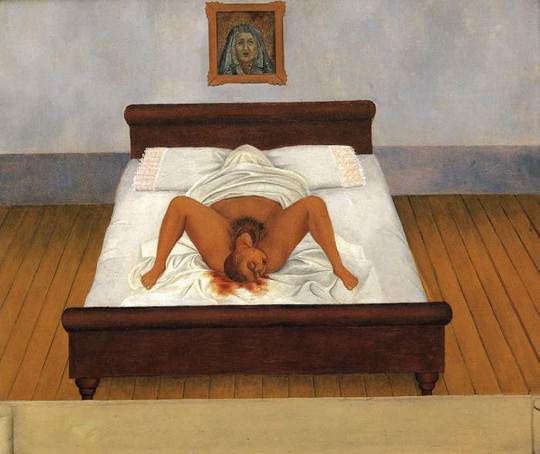 Via The Based Blog

I always interpreted it to be Frida giving birth to herself, which seemed like a powerful statement about artistic independence. (On an unrelated note, Madonna owns this painting, which TOTALLY MAKES SENSE!) It wasn’t long before I was trying to read and learn as much as I could about this enigmatic woman.

And so I did, and the more I learned about her life, the more incredible Frida became in my eyes. It seems she was always poised to do great things—as a teenager she was one of only a handful of girls admitted to the prestigious Escuela Nacional Preparatoria in Mexico, where she was studying to become a doctor. This was in 1922, and her mother didn’t really see any reason for Frida to get a formal education, since she’d just end up getting married and devoting her life to her husband and kids anyway. But lucky for us all, Frida’s father was progressive enough to encourage his daughter to get an education and follow her dreams. That school is also where Frida’s lifelong dedication to leftist politics was first expressed, when she joined a student socialist group there.

Frida’s professional ambitions were brutally cut short in 1925, when she was 18, as the bus she was riding collided with a trolley car. She was impaled by a handrail; her spine, collarbone, pelvis, right leg, some ribs, and a foot were broken. Doctors were not sure she would live, much less ever walk again, but she did, of course, although she spent months in a full-body cast, had more than 30 surgeries throughout her life (none very successful), and was left unable to bear children.

During her convalescence, Frida began to paint—the bus accident and her resulting infertility were persistent subjects in her work. “I paint myself because I am so often alone,” she later said, “because I am the subject I know best.” Her work also expressed a great love of nature and animals and an ambivalence toward industrialization and capitalism. In Henry Ford Hospital (1932), for example, Frida paints herself in a hospital bed in Detroit after suffering her second miscarriage. 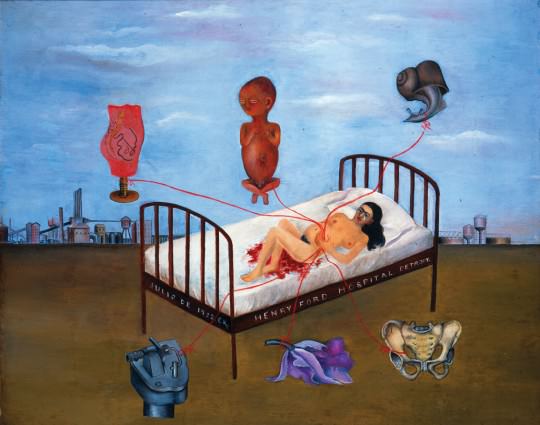 Via One Surrealist a Day

She’s surrounded by, among other things, her unborn baby, the fractured pelvis that prevented her from birthing it, a medical diagram of the female reproductive system (she had been studying to be a doctor, remember), and what looks like a piece of medical machinery, all attached to her body by umbilical cords. In the background you can see the smoggy towers and smokestacks of the Ford Motor Company—which was owned by Edsel Ford, son of Henry Ford, who financed the hospital where Frida lies alone in her bed, and for whom it was named. Just try looking at this painting without getting emotional. You can’t.

Frida once said to a friend, “I have suffered two grave accidents in my life: one in which a streetcar knocked me down…the other accient is Diego.” After her first accident, when she had been painting for a few years, she got a chance to show some of her work to Diego Rivera, a renowned muralist and an important figure in Mexican art. She asked him if he thought she had any talent. He said she did. He also married her.

Being married to a world-famous artist had its pros and cons. His fame and talent overshadowed Frida’s for many years; but his encouragement and support were instrumental to her development as an artist. Her style is sometimes called “folk art,” because of its use of colors and motifs from Mexican visual traditions, and sometimes surrealist, because she used so many visual metaphors—but she always held that she was a realist: “My paintings are…the frankest expression of myself,” she said. André Breton, the “father of Surrealism,” described Frida’s work as “a ribbon around a bomb,” which is the perfect description, really.

Breton gave Frida her first show in Paris, which led the Louvre to buy one of her paintings, The Frame—the museum’s first-ever acquisition by a 20th century Mexican artist. 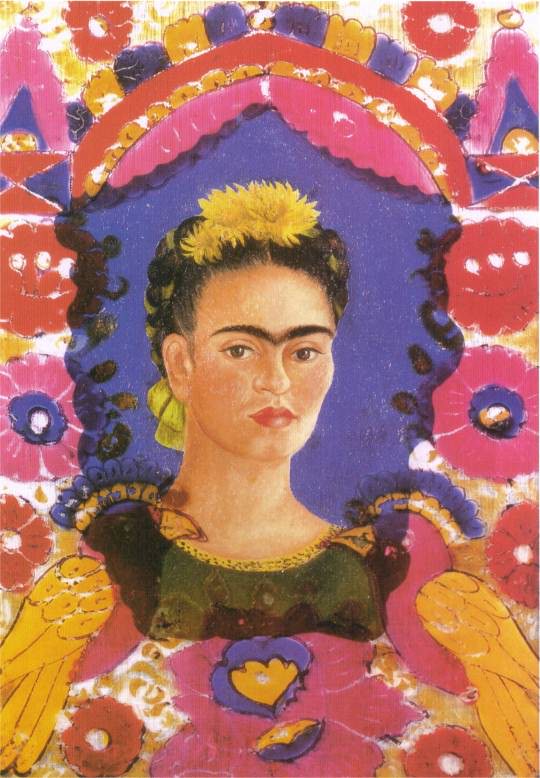 It’s definitely one of Kahlo’s simpler works, a pretty self-portrait on aluminum festooned with flowers—it makes me wonder if everyone was afraid that her other, more characteristic, paintings were just TOO REAL. Still, the purchase was an important milestone for Frida, and proof that she was more than just Diego Rivera’s wife—she was a real talent all on her own.

Frida and Diego’s marriage was tumultuous, to say the least. They were both strong personalities, and neither had a particular affinity for fidelity, although each of them tolerated the other’s affairs, for the most part. However, when Diego took up with Frida’s little sister Cristina, it didn’t sit too well with Frida. She moved into her own apartment and didn’t paint for a year. When she went back to work, the first thing she made was a painting called A Few Small Nips (Passionately in Love): 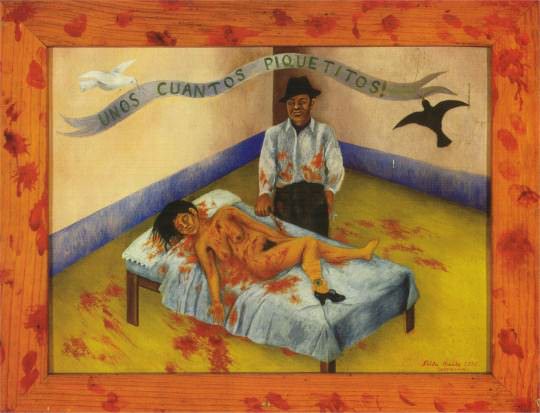 The painting depicts a murder that had recently been reported in the newpaper: a man, believing his wife had cheated on him, threw her on their bed and stabbed her 20 times. During his hearing, the murderer defended himself by telling the judge, “But it was only a few small nips!” I feel like Frida must have identified with the victim—and her “few small nips” were the indignations she regularly had to put up with from Diego, which were slowly killing her.

Frida was no martyr, though—she had plenty of affairs as well, with women and men, including Leon Trotsky, the Marxist revolutionary leader. Frida and Diego were active Communists, a theme that was always present in Diego’s work, but only showed up in Frida’s later paintings, after she decided that she should use her art to “benefit the revolution.” In Marxism Will Give Health to the Sick, for example, she stands in the center of the canvas in an orthopedic corset, held by two giant hands, with Karl Marx’s face looking over her shoulder. 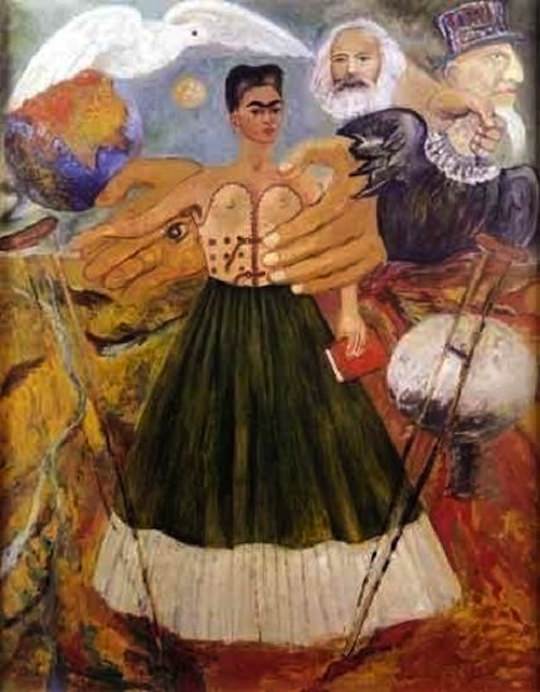 In 1936, when Trotsky had been exiled from the Soviet Union, Diego and Frida invited him and his wife to stay with them in their house in Mexico, which is where the affair began. Diego was reportedly not bothered by his wife’s female lovers, but the male ones were another story. The couple eventually divorced in 1939, whereupon she painted The Two Fridas, my favorite work of hers. 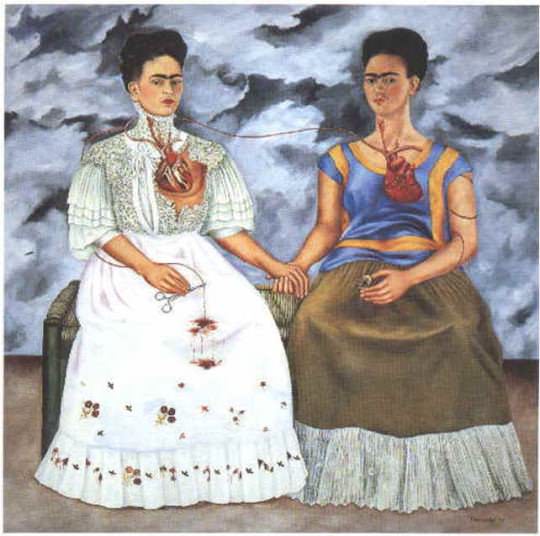 Under a stormy sky, the two Fridas sit side by side, gazing forward placidly. One of them is wearing the native Mexican outfit that Diego liked Frida to wear every day; in one hand she holds a small locket containing a portrait of Diego, with the other she clasps the hand of another version of herself—this one in a white European-style dress, holding a pair of medical pincers. She’s trying to stop the flow of blood from an open vein that sprouts from her broken heart, but she can’t. Her heart is bleeding everywhere.

Even after all that, Frida and Diego couldn’t stay away from each other. A year later, they got back together, and got married AGAIN. They stayed together this time, until Frida’s death in 1954. (She was a rabblerouser till the end: 11 days before she died she participated in a public protest against U.S. intervention in Guatemala.)

By painting herself, Frida painted her life and her emotions. Her portraits speak about love and despair and loneliness and pain—but there’s always an underlying sense of pride and defiance in all of her work. When I look at her paintings, the main thing I see is strength, even when she is a wounded deer: 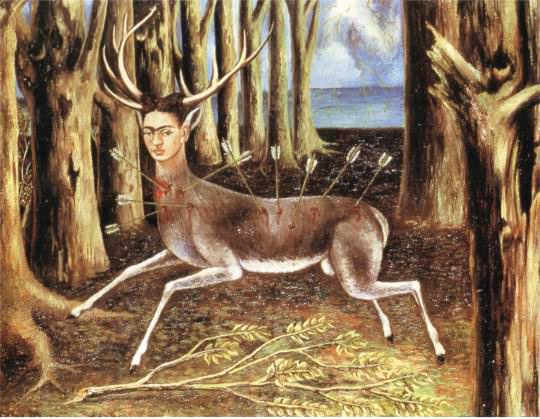 The Wounded Deer, 1946, via Wikipaintings.org

That’s the face of rising above pain. It’s the face of bravery against any odds. That’s a face that refuses to be defeated. How could I not fall in love with her? ♦