They melt my grinch-y heart. 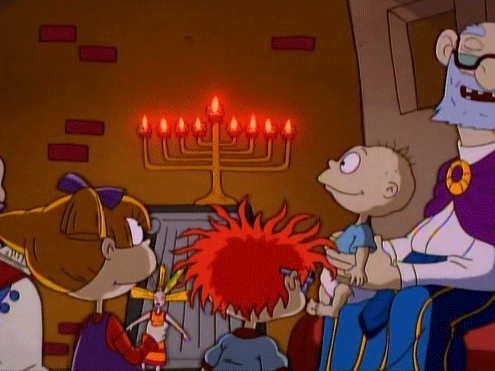 Come December, is there anything better than a holiday-themed animated TV special? Not to me, because I’m addicted to them. Frosty the Snowman, Shrek the Halls, Pikachu’s Winter Vacation: Christmas Night—sure, I can buy these on DVD or watch them on my computer whenever I want, but that’s not the point. They’re broadcast on television but once a year, during their rightful season, and this is what makes them so precious and exciting. Basically they’re the Shamrock Shake of TV programming.

While I’m not opposed to live-action movies and sitcoms and all of the holiday cheer that they offer, it’s the animated ones that really pierce through the dense layers of “meh” and “ugh” that surround my heart. The new ones remind me of the old ones, and the old ones remind me of how wildly enthusiastic I was about Christmas when I was a little girl, when all the other months were like a boring prologue to “the most wonderful time of the year.” These programs often aired at night, which, when I was very wee, was a major part of their appeal: watching a cartoon after school is normal, but watching a cartoon when Murphy Brown is usually on—pardon me, I grew up in the ’90s—made me feel like the universe was restructuring itself just to please me.

These days, I relish the uncomplicated, positive messages that animated holiday specials promote. Good and bad, wrong and right—it’s all so clear-cut, and that’s deeply comforting when, in real life, there’s so much uncertainty and incomprehensible violence. The characters in these specials exist in enviable worlds where decency and kindness always win out, where villains are miraculously reformed when confronted with the loving spirit of the season, and where everyone’s forgiven for acting like a huge ass.

Nothing demonstrates this more memorably than the original 1966 version of How the Grinch Stole Christmas. The Grinch is straight-up dastardly; when we’re introduced to him, he’s swallowing a toothpick for no good reason. He lives on a mountain just north of Whoville, and as he looks down on its cheerful residents preparing for Christmas, he decides to put an end to all of their celebrating. He steals their presents, decorations, trees, and, in a weirdly spiteful move, ice cubes. But Christmas comes and the Whos are unfazed. They remain cheerful, they hold hands, they sing—their joy doesn’t come from material things, it comes from Whovian love and togetherness. The Grinch is moved, his heart grows, he returns everything, they all eat together, and even though the Whos know that the Grinch totally took their stuff earlier that day, the dinner isn’t the slightest bit awkward. Whos are just cool like that. I dig their absolute acceptance.

Selflessness in the face of all the gift-grubbing and Black Friday stampedes is also customarily and heartwarmingly championed. Take the Hey Arnold! Christmas episode, for example, in which Arnold tries and unfortunately fails to reunite a character named Mr. Hyunh with his long-lost daughter, whom he was separated from during the Vietnam War. Helga Pataki, who’s normally extremely antagonistic towards Arnold because she secretly has the hots for him, ends up coming to the rescue, tracking down Mr. Hyunh’s daughter in a twist that isn’t at all unexpected but almost made me cry (OK, it totally made me cry). Helga has to give up the one present that she desperately wanted in order to bring Mr. Hyunh and his daughter together, and then she doesn’t even take credit for what she’s done. That kind of generosity and the quiet goodness of the conclusion touches my soul in such a way that I probably need to stop talking about this episode right now lest I start sobbing at the memory of Helga, alone, whispering “Merry Christmas, Arnold” as snowflakes fall around her.

But I don’t always sit there crying like a fool when I watch these programs. Sometimes I sit there singing like a fool, because seriously, they have the best soundtracks. I could listen to “You’re a Mean One, Mr. Grinch” all year long, what with its killer big-band sound, Thurl Ravenscroft’s deep and sinister voice, and the remarkable string of absolutely perfect metaphors and put-downs (“Your brain is full of spiders / you’ve got garlic in your soul”). I recommend blasting this one as you drive down the street. Everyone you pass will love you, I promise. My favorite song, though, is “Christmas Time Is Here” from A Charlie Brown Christmas (1965). In the special, Charlie is disheartened by the commercialization of the holiday. (“My trouble is Christmas,” he says. “I just don’t understand it. Instead of feeling happy, I feel sort of let down.”) “Christmas Time Is Here,” with its jazzy, melancholic score courtesy of the Vince Guaraldi Trio and a chorus of soft, lilting voices, ends up being a really smart meditation on the true meaning of the season, and it just gives me the chills.

The stop-motion specials produced by Arthur Rankin Jr. and Jules Bass in the ’60s and ’70s have always been crucial to my family’s Christmas tradition, and I think they’ve ended up creating this very cool, cross-generational sense of nostalgia. My mom’s never going to be able to fully comprehend the awesomeness of Pogs, and I’ll never have the chance to look as badass as she probably did in her Beany-Copter, but we both share a fondness for Rudolph the Red-Nosed Reindeer and The Year Without a Santa Claus. (In the former, a couple of misfits from the North Pole–Rudolph and an elf/aspiring dentist called Hermey–save Christmas; in the latter, Santa decides to take a little vaycay from work despite the fact that he doesn’t do crap during the other 11 months.) These were a part of both of our childhoods, and naturally we have rapid-fire, Lorelai-and-Rory-Gilmore-style convos about the Snow Miser and that super-fresh elf with the sunglasses who hitches Rudolph to Santa’s sleigh. I get the sense that these specials were a touchstone for almost everyone. Shows like Community, Eureka, and SpongeBob SquarePants have all paid homage to them. The quaint little handmade costumes and the herky-jerky movement of the puppets makes them look like tiny dolls come to life, which is mildly creepy, but mostly magical.

In more recent years there’s been an effort to make sure that animated holiday specials really are holiday specials, and not just Christmas specials that end with an “It’s a Small World” lineup of multicultural kids holding hands during the finale, as if everyone on the planet is united by Jesus’s birth and a love of elves. Modern specials acknowledge that people—and anthropomorphized animals—of different cultures and religions coexist, and that many of us live in multi-faith households. In Arthur’s Perfect Christmas, pals of everyone’s favorite PBS aardvark describe their winter holiday traditions: Francine misses Muffy’s party because she’s observing Hanukkah; Arthur’s overachieving bear buddy Alan “The Brain” Powers celebrates Kwanzaa; ventriloquist moose George is Swedish and honors Saint Lucia Day; and Arthur’s BFF Buster decides that he wants to invent a completely secular, stress-free holiday that’s just about him and his recently divorced mother spending time together.

In the holiday-themed episode of As Told By Ginger, which is one of the most fantastic cartoons ever because the characters grew older and actually changed their outfits every episode, introspective middle-schooler Ginger Foutley discovers that her grandfather was Jewish, and she tries to explore that part of her heritage as Hanukkah approaches. Then there’s A Rugrats Chanukah, in which bold baby protagonist Tommy Pickles imagines himself as Judah Maccabee and says things like “A Macca-baby’s gotta do what a Macca-baby’s gotta do” while listening to his grandfather describe the history of the holiday. I went to a public elementary school where we all had to make Santas out of construction paper and cotton balls with the assumption being, I guess, that everyone celebrated Christmas. So, no, there wasn’t a ton of cultural sensitivity or inclusivity there, and I feel cartoons like these are important, because they let kids know that not everybody has the same experience, and hopefully they give everyone something to identify with, which might not be happening anywhere else.

But whether they’re educational or just kind of silly and cute, watching these specials now reminds me of how unfathomably cozy I felt when I watched them as a kid. I’d either be sprawled out on the living room couch or cuddled up next to my mom in her bed, eating green olives (my addiction to green olives is just as intense as my addiction to animated holiday specials). These shows are so sweet, and while sweetness isn’t something that I seek out most of the year—Grinchiness seems to be my default setting—I take immense pleasure in binging on it this month. ♦