It’s Not the End of the World

And now we know it. 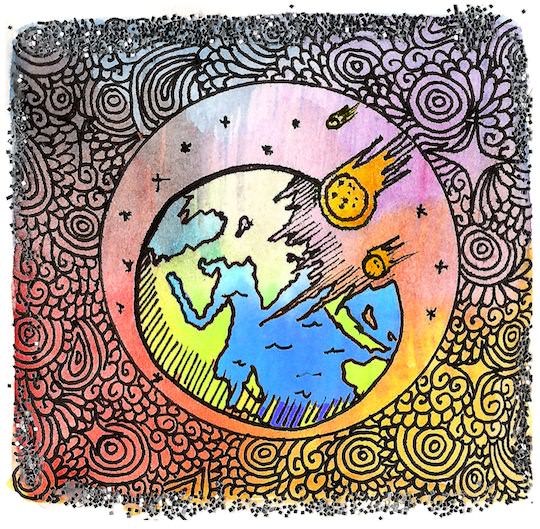 For weeks, freaked-out people across the world have been ransacking stores to stock up on supplies for the Mayan apocalypse, which was supposed to go down today. In Russia, according to The Guardian, end-of-the-world supplies included salt, matches, torches, and candles; not exactly sure what the salt was for, but I can appreciate that doomsayers were thinking ahead enough to realize they’d want their last meal to be well-seasoned. Chechnya’s President Ramzan Kadyrov tried to offer some solace to fearful citizens on his website, but actually just ended up sounding like kind of a jerk: “Does no one realize that once the end of the world comes, candles won’t help them?” Thanks for the consolation, dude! Meanwhile, NASA released a video explaining why everyone needs to just chill.

By now we all know that the apocalypse didn’t happen today, and I really hate to be a killjoy, but it probably won’t happen in our lifetimes. I have accepted this, after spending literally one-quarter of my life studying and/or mildly freaking out about it, partly because of my semi-superstitious upbringing—my family is Mexican, and my grandmother was a curandera (a folk healer)—and partly because I am such a “just in case” person when it comes to these situations. You never know, right? But sometimes you do know. Fire did not rain down upon us from the searing lips of the feathered serpent gods. Tectonic plates did not rise up and swallow humanity whole. The magnetic poles did not shift. Mel Gibson’s hot Apocalyptos did not chase us through rain forests to our collective demise. John Cusack did not escape skyward on a borrowed plane as Los Angeles crumbled into itself below (although 2012 remains an extremely high-quality example of doomsday cinema). Today is a significant date in the Mayan calendar, but it has been misinterpreted for years, and for years archaeologists specializing in Mesoamerican cultures have been saying so.

So why are there endless forums, preparedness books, Nat Geo docudramas, and a $200-million Roland Emmerich film based on the concept? Here’s the deal: the Mayans, who lived (and continue to live) in and around the Yucatán Peninsula and Central America, were total bosses who, like many other ancient civilizations, developed highly complicated methods of astronomy and time-clocking, obviously without the aid of modern jams like telescopes or clocks. In around 5 B.C., they began using a sophisticated calendar that divided time into many complicated cycles, including a 260-day year called a tzolk’in, as well as a solar year encompassing 365 days, like our own. It’s elaborate, yes, but when your whole culture is based on building super-advanced cities and being mathematical wizards, you probably want a lot of ways to account for your activities. And anyway, the Mayans thought of time as cyclical, hence their super-ill calendar is round and divided up into 19 ouroboros-looking segments, which represent months. (I have one in my apartment handmade by someone named Johnny Camal of the Cayo District in Belize, where many modern Mayans live today. Yes, there are modern Mayans! We’ll get to that in a sec.)

The part of the Mayan calendar that has everyone freaking out is coincidentally one of the coolest parts of their culture. Whereas the Gregorian calendar divides time between “before Christ” and “anno Domini,” so that 2012 is 2012 years after Jesus’s birth, the Mayans began their calendar at the precise time they believed their gods created humanity. Accordingly, the sky god placed three stones at the foot of a pitch-black, sleeping sky; something clicked and the sun was raised, bringing life to earth. “[Earth] arose suddenly, just like a cloud, like a mist, now forming, unfolding,” reads one translation of the Popol Vuh, an ancient text describing early Mesoamerican mythologies. By the Mayans’ estimation, all of that went down in 3114 B.C., and they believed that after 13 baktuns—a baktun being yet another measurement of time that consists of 394.26 years—the calendar stopped. That didn’t necessarily mean it’s ALL OVER, but still: you can bet that back in 5 B.C., people weren’t able to conceive of what would be happening in the year 2012, much less that people 2000 miles away from the origins of their civilization would be fighting each other for toilet paper in preparation for the end of the world.

Obviously, the Mayan calendar is hella confusing, and some archaeologists and Mayanists don’t even agree on the way they calculated the dates, so you can understand how the end of the 13th baktun could be totally misconstrued to mean the End of the World (™). I certainly bought into it for a long time, although I also filled my bathtub with water for Y2K and believed with all my heart that the year 2001 would be not unlike the world on that crappy TV show Revolution. Clearly, we are not currently foraging for electricity pendants. But still! It makes sense why people are prone to believe doomsday prophecies, what with global warming already wreaking planet havoc and half the countries on earth engaged in perpetual war. I really can’t begrudge anyone for being freaked out enough to believe the Mayans predicted the end.

But again, they believed time is cyclical, which is actually pretty beautiful. Everyone should have just listened to what modern Mayans have to say: the new baktun just means the calendar is starting over again—and perhaps we’re in for an era of enlightenment, where we all have the opportunity to restart and broaden our minds, not unlike New Year’s. A new beginning! No indigenous Mayans holed up in bunkers or hoarded cans of beans; rather, all over the world they’ve been blessing water, offering up maize, and participating in purification ceremonies. Today is not a time to fear, but to celebrate. ♦

doomsday scenarios mayans the apocalypse the end of the world