The hidden dangers of idol worship. 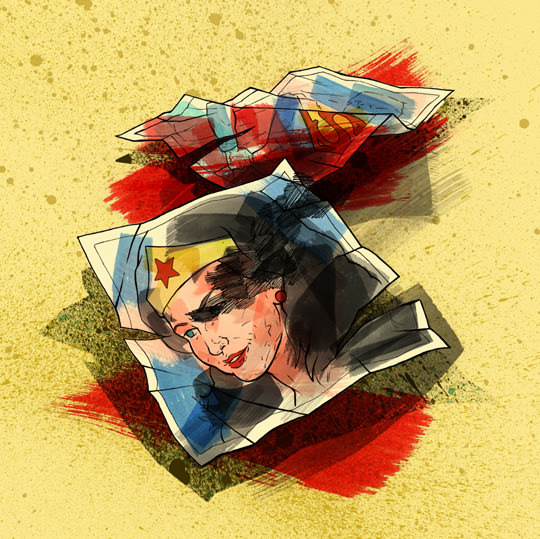 There’s a time in your life that you might not remember, when you were very, very small, and all of the adults in your life seemed perfect. I know that might seem almost unimaginable now, but you probably saw your parents, teachers, and guardians as infallible gods. It’s more likely that you remember your teenage babysitters—did they not seem like the coolest, most glamorous creatures in the world? Well, those demigods were then the age you are now, and the age of your classmates—and you know how glamorous all of your lives are.

There’s nothing wrong with looking up to, admiring, even borderline WORSHIPPING other human beings—it can actually be helpful to hold select people up as role models, to purposely focus on what’s awesome about them because it inspires us to be awesome, too. Who among us can’t understand why, when Kathleen Hanna catches herself reading negative comments on the internet, she looks to the example of a certain person who probably has flaws but if so we don’t need to know about them:

I just think, Would Beyoncé be reading this? No, she would just delete it, or somebody would delete it for her. What I really need to do is close the computer and then talk back to that voice and say, Fuck you. I don’t give a shit what you think. I’m Beyoncé. I’m going to Ibiza with Jay-Z now, fuck off.

But I think it’s important to know the risks of putting mere mortals on a pedestal—the main one being that they will probably fall off one day. Maybe your favorite director will turn out to be a sexual harasser. Or that marriage that you always held up as an example of perfect love dissolves. And what are you left with? Would you be mad if I said you’re left with a Valuable Life Lesson? You’d have good reason to be. But it helps to prepare for these almost-inevitable moments of disillusionment, so let’s take a look at how to do that, with three varieties of people.

I was a little kid, sitting at the kitchen table, coloring with a set of crayons that had really elaborate names for all the shades. My dad was at the same table, concentrating on balancing his checkbook. I had only recently learned to read, and the names of these crayon colors were too long and fancy for me to make out.

“Fluorescent yellow,” he said, squinting at the label.

“What about this one?”

I would go back to silently coloring for a few minutes before finding another shade I just had to ask him the name of, and after one Faded Lavender or Crimson Blush too many, my dad’s patience wore out. Finally, totally frustrated, he grabbed my box of crayons, walked across the living room, opened the back door, and flung them out the backyard.

I could not believe my eyes. My dad had always been the most patient person on the planet, and I had never seen him react like that before (to be fair, I did ask him a lot of color names). He immediately apologized for overreacting and helped me gather all my crayons, but my view of him had changed. Not in a huge way—a yard full of broken crayons is not exactly the stuff of childhood trauma—but this was the first time I saw that my father could be impatient, hasty, and hypocritical (“Don’t throw temper tantrums when you’re mad” is a lesson he was always trying to teach me). I realized that my father wasn’t a superhero or a saint—he was just a man. And this led me to a radical new idea that totally blew my five-year-old mind: all adults were fallible, and people of any age could make mistakes, be petty, be selfish, or be wrong. It was an epiphany on the scale of finding out the truth about Santa Claus or the Tooth Fairy. It made me dizzy. If I couldn’t rely on adults to always be right, who could I trust? How would I ever know what was true??

I didn’t turn into a tiny nihilist, questioning the very notion of right and wrong. Instead, I slowly learned to check in with my own instincts when an adult told me something. If something a grownup did or said felt wrong to me, I no longer trusted them blindly. Basically, I started to learn to think for myself and develop my own moral compass, which are pretty helpful things to know how to do.

Tina Fey is one of the funniest people in the world to me. Exhibit A, she wrote Mean Girls. Also, she created 30 Rock, a sitcom that has made me cry from laughing on several occasions. I have loved her since she was a writer and cast member on SNL in the late ’90s, and I applauded when she was appointed that show’s first female head writer. I was inspired by her book, Bossypants. Fey, to me, could do no wrong. She represented the very pinnacle of comedy to me—someone who knew how to be hilarious with intelligence and talent and integrity.

Then, a couple years ago, I watched an episode of 30 Rock that contained a particularly heinous rape joke (if you don’t want to read the content of the actual joke, don’t click on that link). I was so repulsed that I immediately turned off my TV. I sat there for a while, my mind reeling. What the hell was going on? How could Tina Fey, who could do no wrong, do something that felt sooo wrong? Did she think rape was hilarious? I actually think there’s a way to be subversively funny about almost anything, but that joke didn’t feel subversive or clever or anything other than gross, unfunny, and unnecessary. It felt way beneath the pedestal I’d placed Fey on.

But weirdly enough—while I still wish she hadn’t written/approved that rape joke—that lapse in judgment helped me appreciate Fey’s good bits in a different way. Because I had grown up watching her, I had kind of taken for granted that she was some kind of Comedy Robot, programmed to effortlessly do and say the funniest thing in any given situation. But now that I saw her as a fallible human woman (stars, they’re just like us!), I realized how hard she works at her craft—and anyone who works really hard to be great at something makes mistakes along the way. And this helped me related with her—I’ve made my share of jokes that have fallen horribly flat (more on that later). So, like, if Tina Fey can make mistakes sometimes, maybe I can aspire to be funny on occasion? Let’s dream big, why not.