Giving Me Something I Can Believe In

My faith used to be a perpetual whirlwind of soul-deep confusion. 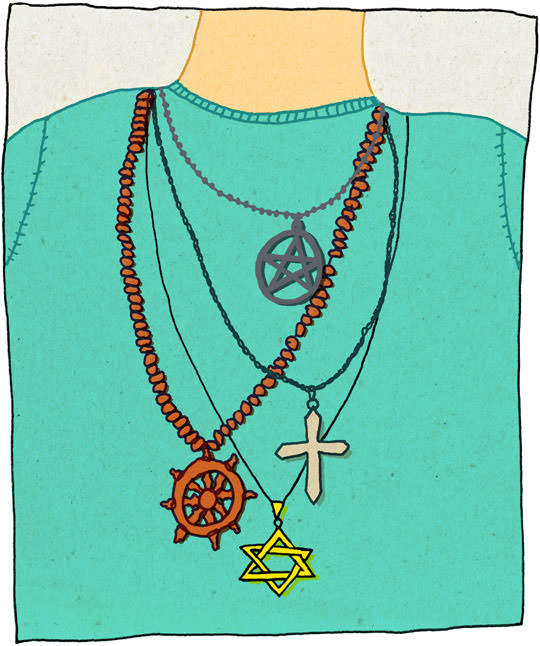 Once upon a very short time, I was a devout Jew. I specify that this period was brief because, before my 18th birthday, I would also identify as Catholic, Presbyterian, Evangelical, Wiccan, Buddhist, and atheist. It was obviously really easy for me to be secure and unquestioning in my religious beliefs, and my string of young conversions were a totally fun process that was not at all fraught with long periods of uncertainty and doubt in not only myself, but the very nature of existence. HAHA, JUST KIDDING, YOU GUYS—faith, to my younger self, was a perpetual whirlwind of soul-deep confusion. Although it’s certainly true that religion can be, and for a huge number of people is, a fulfilling, engaging part of life, I have had a lot of trouble understanding my spiritual place in the universe for the majority of my existence within it. This led me to travel down mannnnyyyyy different paths in search of a religion with which I genuinely related on a personal level as well as in a universal, holy way.

Even though all this religious exploration was full of philosophical and existential meltdowns, I’m really glad for all that restless searching, because it finally led to where I am now—having settled into spiritual state of mind that makes me feel grateful for and secure in what I really believe.

My lifelong religious befuddlement makes me something of an anomaly among my closest family. Throughout 54 years, six children, countless holidays, love notes, and arguments, my paternal grandparents have each respectfully maintained and observed their own separate, but equally devout, faiths. My grandmother is Catholic and my grandfather is Jewish. Over the years, I have alternated between thinking they were submissive, incurious people who just, after taking on the faiths of their own parents, just never bothered to question them, even after marrying someone who believed something different (this was during my longstanding period of being a self-righteous jerk); and being profoundly impressed by their utter certainty in their faith, a steadiness that is completely foreign to me. Long before my divine confusion set it, though, my grandparents’ two faiths intertwined to define my earliest religious identity.

Per my grandmother’s wishes, I was baptized Catholic as a baby, but Judaism was the first religion that I chose to belong to. At three, I insisted that, like my great-grandmother Blanche, who lived in a high-rise in Coney Island, and my distant cousins who wore headscarves and had Hebrew names like Chaya, I was a through-and-through Jewish Jew. My mother attributed this change to my toddler love of Jewish stories, food, holidays, and incantations—basically, I would jump all over anything that had even the tiniest bit to do with “God’s chosen people.” Most of all, though, I loved that side of my family best when I was wee, and their zealous Judaism was what they all had in common. I insisted on learning the prayers and attending services with Jewish families in my neighborhood. When Grandma Blanche found out that I had been broadcasting my Judaism to my preschool teachers, classmates, and pals on the block, she wept with joy. The next time she saw me, she gave me a menorah, which is a religious candelabra used to observe Hannukah, that she had brought with her from Russia to Brooklyn. At the time, I saw “God” and “family” as parts of an overarching, loving entity, one to which I belonged.

My parents, although slightly mystified by my refusal to get down with the New Testament, were tentatively accepting of my self-designated Judaism. “You can be Jewish as soon as you’re old enough to walk to the cantor [a Jewish prayer leader] and take lessons,” my mom remembers telling four-year-old Amy Rose. I understand that not everyone’s parents are willing to give their children this kind of autonomy, and I know that it’s important to many families that everyone observes their faith in the same way—but to this day I appreciate that my folks didn’t freak out when I decided to do things differently. I, on the other hand, was not always as tolerant. “When you were five,” my mother remembers, “your little sister wanted a Virgin Mary statue on the front lawn. You said, ‘You can’t do that! It’s disrespectful to me because I’m Jewish!’ And then you cried for hours.”

I had my first crisis of faith when I was about nine. My mom had brought me to the synagogue to help a neighbor create artwork for the walls of the temple. We were making a sign that listed the Biblical mandates that Jews were meant to observe, one of which said that Jews could not marry or even date outside of their own religion. When I realized that there were restrictions—that I potentially wouldn’t be available to people I might like—I felt distressed and insulted. After a childhood defined by Yiddish slang and a strong devotion to bagels and lox (which persists to this day, though my beliefs have changed), I gained a new understanding of religion, which sent me on the spiritual spiral of uncertainty that would plague me like so many frogs and locusts for the next decade: organized religion has rules, and they’re not always fun ones. My Judaism was meant to be a way to get closer to people that I loved; the idea that it might keep me from loving others in the future was abhorrent to me. So went the first of my many falls from grace (although I still treasure Grandma Blanche’s menorah).