My sister in solitude.

How to Make a Celebratory Tassel Garland 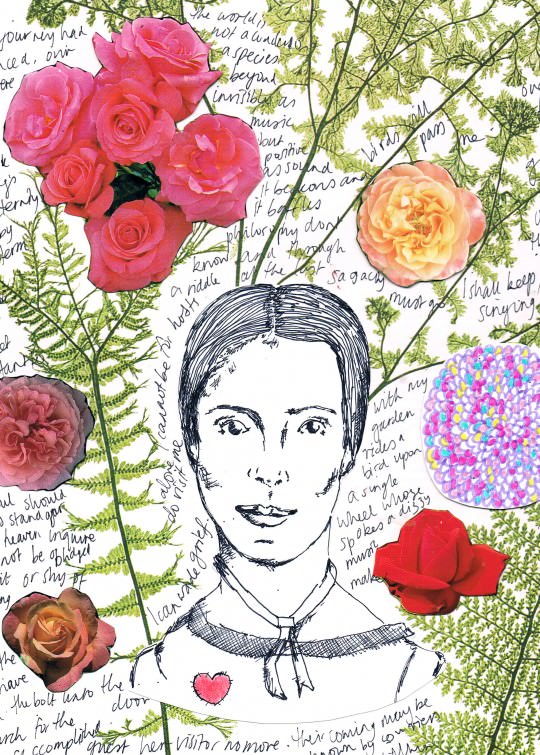 For decades, Emily Dickinson rarely left her room. She sat at a simple desk by her bedroom window on the top floor of her family’s house at 280 Main Street in Amherst, Massachusetts, and wrote poems. Only about 10 of the almost 1,800 poems she wrote were published during her lifetime, and those were probably submitted to journals and publishers anonymously, without the poet’s knowledge, by friends or relatives. When she passed away in 1886, at the age of 55, her family found a hidden treasure trove: massive bundles of papers and handmade chapbooks filled with the many, many powerful poems that distinguish her as one of the greatest literary talents of the 19th century.

Her compact, riddle-like verses about nature, mortality, and the soul will probably be dissected and discussed in schoolrooms and lecture halls for as long as English is spoken, and possibly longer than that. But although her art is held in the highest regard, her biography has been sentimentalized with romantic theories about why she lived her adult life the way she did: avoiding most human contact, rarely venturing past her house and its garden, and, after her father died in 1874, dressing head to toe, every day, in white. She’s often described as a fragile woman-child, a wraithlike spinster, a proto-goth weirdo. People speculate as to her mental, physical, and emotional health. There are volumes of scholarship devoted to hypotheses about what might account for her self-imposed isolation: Was she heartbroken? Agoraphobic? Epileptic? Blind? There had to be something wrong with her—why else would a person want to spend so much time alone?

I was recently in the car with my dad when the Beach Boys’ “In My Room” came on the radio. “It’s Rosie’s song,” he said, turning it up:

It’s been more than a decade since I lived at home, but he’s still right. As long as I can remember, I’ve longed to be by myself. Growing up, I was lucky enough to have my own bedroom, and I guarded my space like a dog with a bone. I wanted to shut my door to my raucous family, the pressures of friendships and social interactions, daily worries and long-term fears, the basic humiliations of being a human person in this world. This was hard for my family to understand. When I’d lock the door, they’d all want in: my brothers were convinced they were missing out on something truly thrilling, while my parents outlawed locked doors on safety grounds. (I never really understood this—what did they think I was going to do, rug-burn myself to death? Get tangled in the curtains and suffocate? Bleed out from a horrific stepping-on-a-Lego-induced wound? OK, that last one at least seems possible.) My only peace was late at night, after everyone went to sleep. I’d read with my flashlight so that my dad wouldn’t know I was awake (staying up late: also taboo). At night I could focus my thoughts and finally find the privacy I craved.

I’ve never been a big reader of poetry—I tend to think in cascading sentences, and I find line-breaks hard to follow—but I’ve always thought of Emily Dickinson, who was born 182 years ago today, as my own personal patron saint of creative solitude (and zines—she made zines that she called fascicles!).

Others may see Emily’s reclusiveness as a symptom of a problem—but I always saw it as a solution to one. It was the 19th century, and Emily Dickinson, a woman, wanted to be a writer. So she retreated from the obligations that would have absorbed her time and energy: marriage, motherhood, keeping up appearances, the social expectations that came with her family’s privileged station. One afternoon while her niece was visiting, Emily made as if to lock her bedroom door with an invisible key, and said: “It’s just a turn—and freedom.” For Emily, solitude meant not imprisonment, but the opposite: a release from expectation.

Writing poetry made another kind of liberation possible: it gave her the opportunity to inhabit multiple, shifting selves beyond the limited identity her class and culture offered her. Poetry allowed her to see beyond the confines of her room, and indeed herself. “The Brain has Corridors—surpassing / Material place,” she wrote in one poem (like most of her poetry, it has no title). Emily didn’t write for fame our fortune; she wrote for herself, because it was the only way she saw to leave the narrowness of human experience—the walls of so many rooms—behind.

Folks don’t like it when you tell them you need to be alone. The very notion is confusing to many (maybe most?) people. Friends and family can feel hurt, or even angry, when you choose being with nobody over being with them. And maybe they’re even scared for you: spending too much time alone makes you vulnerable to loneliness, the gloomy sister of solitude. But Emily Dickinson didn’t spend all that time in her room feeling sorry for herself—her separation was a means to an end.

There is a solitude of space
A solitude of sea
A solitude of death, but these
Society shall be
Compared with that profounder site
That polar privacy
A soul admitted to itself—
Finite infinity.

When you make something out of nothing—a poem, a novel, a dress, a painting, a robot, a song—you have to be able to silence all the voices telling you do it differently, you suck, forget it, let’s have lunch, let’s watch a movie, let’s bury our bad feelings and self-doubt with food or drink or ill-advised eBay purchases. You have to be able to say no to everyone and be OK with what you have left. Solitude can be a revolutionary act. “The Soul selects her own Society— / Then—shuts the Door.” Emily taught me that. ♦