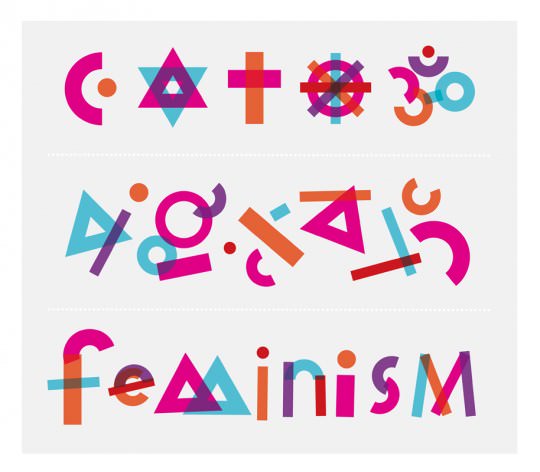 When I was about 15 years old, there was nothing anyone could do or say to convince me that the Christian God (A dude! In the sky! Bossing me around, and deciding what I was allowed to do, and stuff!) was not a creation of the patriarchy, invented specifically to ruin my entire life. At the time (and evermore), I was trying to liberate myself from sexist oppression and male bossing on a practical, day-to-day basis. I was trying to assert my authority and autonomy as a young woman. The idea of handing my soul over to a millennia-old all-male organization, dedicated to making sure I listened to the instructions of one man, who was supposedly right about literally everything…well, that did not exactly mesh with my five-year plan.

I don’t regret that part of my life, and I don’t think it was “wrong” for me to feel that way. I had grown up in a Catholic home, and though today I’m aware that there are a lot of rad feminist Catholics out there, a lot of the things I was taught by my church leaders as a kid (e.g., women are not equal to men; abortion is morally wrong; sex before marriage is a sin, as is any sex at all with someone who was assigned the same sex at birth as you) were things I just didn’t agree with (and neither do I today!). Not being aware, as a teen, that there were progressive alternatives to my family’s church, I jammed out with my heresy, reading The Mists of Avalon, listening to lots of Tori Amos, and enjoying my new woman-friendly, anti-Catholic lifestyle. (It upset my parents to no end, which I confess was part of the appeal.) By the time I turned 18, I was certain that I had no religious beliefs whatsoever (though I still crossed myself whenever I had to walk down a dark street alone). I thought that religion was superstitious, and irrelevant, and not something that a proud, rational, feminist woman like me would ever need or want in her life.

Last year, I changed my mind. I don’t know how, or why. It just felt like I needed to sit down and figure out my life and my values, to re-evaluate what I believed and how I wanted to live. I was reading a lot about Buddhism during this time, and was even meditating regularly, though I couldn’t call myself a Buddhist by any means. (I’m fairly certain someone would need more than a Kindle and some spare breathing time in order to claim a faith that rich and complicated.)

Around the same time, during one of our many late-night chats, my friend and sometimes editor Emily McAvan told me she was converting to Judaism. That grabbed my attention. Emily is a radical queer woman, a passionate advocate for gender and economic justice, a teacher, a writer, an academic—someone who thinks about things really closely and really well, in other words—so the idea of her going through the long and difficult learning process of a formal conversion just so she could start practicing a religion was surprising and inspiring to me, and it got me thinking about how faith and feminism might be friends, complementing and supporting each other rather than necessarily being always at odds. If Emily was converting, that meant there were other women out there who were interested in examining, and possibly populating, the intersection of feminism and faith. I wanted to talk to those women.

I started with Emily herself. Like me, she’d distanced herself from the religion she’d grown up with, which she describes as a “really fringe Protestant faith” that she found homophobic and sexist. At a certain point, she said, she was spending every Sunday arguing with church leaders about “these interpretations of the text they were making that felt really restrictive and unjust.”

In grad school, Emily encountered the work of Jewish scholars who were dedicated to matters of social justice. As a feminist, she was inspired by Judith Plaskow. As an activist, she was attracted to the “call to responsibility” that she found in the writings of Martin Buber and Emmanuel Levinas. And as an academic, she was drawn to the rich Jewish tradition of interpreting religious texts, debating their meanings and how they apply to daily life.

But ultimately, Emily’s conversion to Judaism wasn’t an intellectual choice. It’s not like she weighed the pros and cons of different religions and settled on the one with the most pluses. She just, one day, realized what she already believed.

“It’s like falling in love,” she says. “Why do I love this one person and not one of the other similarly awesome people I know? There’s something irreducibly irrational and excessive beyond the accounting about the attachment to any faith… At a certain point you find yourself changing, actively becoming what you are drawn to. That’s a scary thing, because you don’t know entirely who you’ll be at the end of that.”

The conversion process was intellectually and personally demanding. Emily had to work closely with a sponsoring rabbi, who interrogated her about her personal history and her thoughts about Judaism. She had to study religious and historical texts and show that she had strong ties to the Jewish community. “It’s really daunting to walk into this millennia-long tradition,” she says. “There’s so much to learn.”

Now that the process is over, Emily says that becoming a Jew has made her life better and more joyful. It’s also helped her see her political work in a new light. The religion she was taught as a child focused on the end of the world and the afterlife; Judaism’s emphasis on community, on uplifting and improving the world as it exists, supported her work as an activist. Being part of a religious community also helped her understand other women of faith, including those who might feel alienated by secular feminism. “It helps to have an understanding of religious women’s issues and the ways in which religion can be a source of both oppression and liberation,” she says. Being religious herself “makes it easier to not reduce ‘the Other’ to a brainwashed automaton, but rather someone making choices…just as I am, just as you are.”