Why Can’t I Be You: Meredith Kelly

In which we talk climate change, travel, and cosmogenic nuclide surface exposure dating. You know, the usual.

I Am Whatever I Say I Am 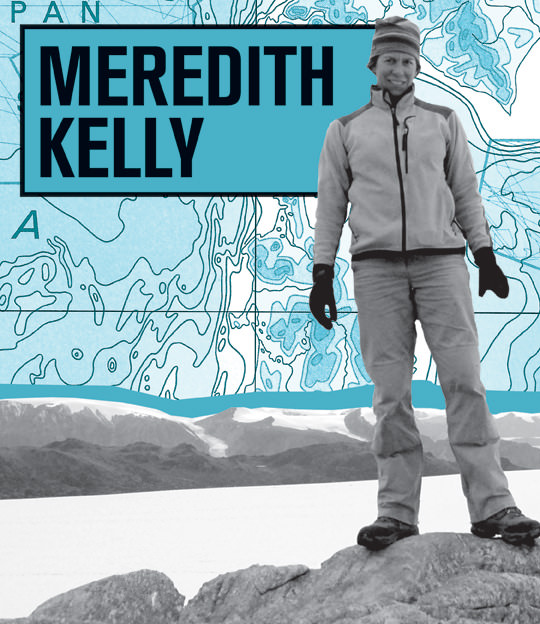 Geologist and paleoclimatologist Meredith Kelly is a total badass. Currently an assistant professor at Dartmouth College in Hanover, New Hampshire, she studies glacial and sedimentary evidence for clues on what Earth’s climate was like in the past to better understand how it might change in the future. Her focus on ancient fluctuations in temperature takes her to the most extreme landscapes on the planet to collect data, from the Dry Valleys of Antarctica to the far reaches of Greenland, from the tropical ice caps of the Peruvian Andes to the Rwenzori Mountains of Uganda. Her work is fascinating and SO IMPORTANT, and her life is shaped by her deep curiosity about how things work. Basically she’s living all of our scientist-superhero dreams.

I always knew I liked the sciences. I liked that they were analytical, and they involved questions, and you could actually find answers to those questions. I always had a harder time with more abstract concepts. Even though I loved art, and I still love writing a lot, I felt like my analytical side was a lot more developed than my creative side. Then there’s also my absolute love for the outdoors. Growing up in Cleveland, we spent Saturdays and Sundays in the Metroparks. Some of my first memories are of walking around and appreciating the outdoors with my family. I think that’s part of why I always liked geology and earth sciences—because a lot of what I do now is wander around outside and look at things.

How did you end up becoming a professor?

I went to Tufts University as an undergrad, and I was thinking maybe I’d try biology. I took my first biology class, and it was filled with pre-med students who were very competitive and not very nice. I knew I didn’t want to study with those kinds of people for four years. So I took a geology class, and I absolutely fell in love with it. It was a really basic class, but we took field trips every week and went out around Boston and learned about landscape evolution and how North America was built, and it was just awesome. After I graduated from college, I took a bike trip with a friend, and we biked from Montana to Seattle. I realized that people have a really disconnected relationship with the environment. So I had the idea to do outdoor scientific education and work with kids. I got a temporary job at the North Cascades Institute in Washington and taught there for a little bit. It was really fun, but it was all temporary work, so I decided to get a master’s degree. I knew by then I wanted to study geologic history.

Well, my project in college involved studying glacial lake sediments in the Connecticut River Valley. The entire valley was once filled with a huge lake, created when the glacial ice sheet retreated northward through New England and left meltwater behind. I was trying to understand why the landscape, particularly in New England, looks like it does. So I went to the University of Maine to do my master’s. I got to study with this professor who did a lot of work in Antarctica, and for my thesis research I spent three months there. We flew to McMurdo Station—

Oh, I know about it from Werner Herzog’s Encounters at the End of the World, the documentary about the weirdo characters that live there!

Yeah, there are definitely some weirdo characters down there. I totally fit in with them! But instead of living in McMurdo, I took a helicopter with my undergraduate field assistant to this area called the Dry Valleys. We spent three months there without coming back to civilization, and it was just the two of us for most of the time. We didn’t have electricity, we didn’t have running water, we didn’t have heat. I actually didn’t shower for 98 days. I guess that places me in the weirdo category right there!

You were there in summer—isn’t that the time of the year when the sun never sets?

Yeah, it’s still cold, but you have 24 hours of daylight. Our tent was yellow—it’s really hard to fall asleep in a bright yellow tent!

What were you doing there?

What did you wear while you were in the field?

I had six pairs of socks. One pair of pants. And a couple pairs of long underwear and a jacket. For three months I didn’t think about what I was putting on for the day. It was dry enough down there that we didn’t get completely disgusting, but I definitely wanted to shower when I got back. The whole experience was amazing. At that point I thought: I want to be a scientist. This is SO MUCH FUN. I get to be outside, I get to travel to amazing places, I get to think about really interesting questions and test these questions with my data!

How did that experience affect you?

When I got back to civilization it was so hard to understand anything that was going on. Like people who were rushing in the morning to get their coffee and absolutely needed to have this particular thing…I couldn’t relate to that for a while.

What did you do after you got back?

I decided to pursue my Ph.D. at the University of Bern in Switzerland. I didn’t know any German, and I didn’t know anyone there. My field area had the Matterhorn and Mont Blanc in it, so I got to spend every summer for three summers walking through the Alps and looking at glacial features and making maps and taking samples.

Environmental scientists have been investigating the Swiss Alps for a long time. What were you doing that was new?

I was mapping the upper surface of the Alpine ice cap—and I was doing it in a much more detailed manner than it had been done before. I was using new technology to determine the age of rock surfaces, a method that’s called cosmogenic nuclide surface exposure dating. It allows me to take a piece of rock that’s exposed to Earth’s surface and be able to tell the last time that rock was uncovered by ice. One thing you can tell from the older Alpine ice cap is where the most precipitation occurred. From that we can map out where we think precipitation was coming from. These and other studies provide information about climate conditions of the past, and they can help predict future climate.