The World Is Bound With Secret Knots

An interview with David Hildebrand Wilson. 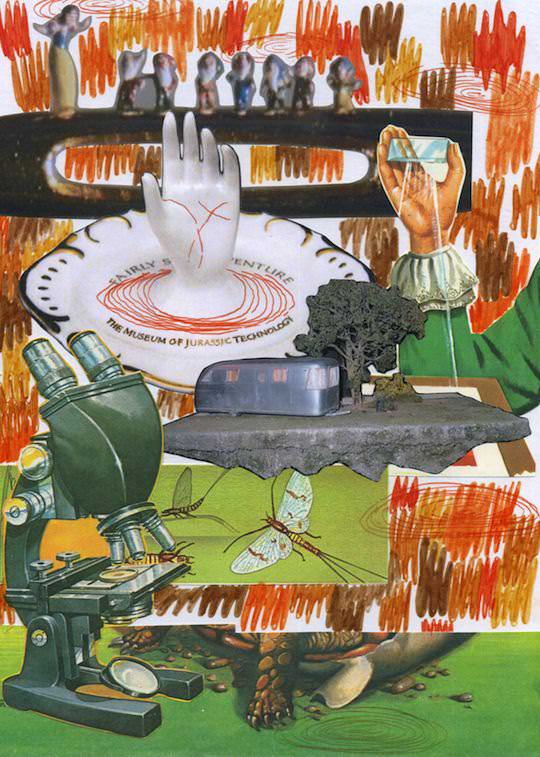 The Museum of Jurassic Technology looks like a humble little storefront on a street in Culver City, California. Upon entering, however, you find yourself in a maze of oddities—a row of microscopes on mosaics made of butterfly-wing scales, a hall of flower X-rays, tiny sculptures displayed literally in the eyes of needles (the sculptor timed his carvings by his heartbeat). At first it feels like being transported to another world, until you see what a loving representation it is of the wonders of our own. You might suspect some of the displays are made-up, or that footnotes, names, and the plaques and pamphlets sitting in the gift shop are fictionalized, until you come to love the ways in which the museum inspires that very act of questioning. Lawrence Weschler wrote in his 1995 book about this place, “It’s that very shimmer, the capacity for such delicious confusion, Wilson sometimes seems to suggest, that may constitute the most blessedly wonderful thing about being human.”

Wilson is David Hildebrand Wilson, who founded the museum in the late 1980s. Since then he’s lived with his wife and daughter in an adjoining trailer, and run the museum with the help of volunteers, visitor donations, and grants. I noticed while we were speaking that he would make these grandiose statements about life and humanity, but they were always prefaced with “I think.” Or he would describe something, and find a better word for what he’s trying to say two or three times, and list them all. You could hear his brain working. It brought back the sense of affection for uncertainty that I felt when I visited his museum in the summer, the same feeling I found when I read Weschler’s book in the fall, and the same one I was overwhelmed with by the time we finished this interview. I might have burst into tears once we hung up? I DUNNO, YOU MAY JUST HAVE TO ~WONDER~. Read on, curious one.

TAVI: Thank you so much for doing this.

DAVID WILSON: Oh yeah, sure, I’m honored. Rookie looks great. How long have you been doing that?

Thank you so much. I started it September of 2011.

Can you tell what the viewership is?

I can, but I don’t. I think if I look at the numbers it messes with my head.

It’s funny—I’m the same way. If people write things about the museum I never read ’em. I’d rather not see it somehow.

I was reading an interview with Stephen Colbert yesterday, and he said reading about yourself is poison—even if it’s positive attention, it just brings you outside of your head.

Oh yeah, it’s easily as bad if it’s positive as it is when it’s negative. It’s better to just avoid what you’re doing and do it without a lot of external input. It can throw you off course.

How would you explain or describe the museum to someone who’s never heard of it?

I think typically what we say is that we’re a small museum of natural history, history of science, history of art, and then everything else that comes along. We’re inspired by older museums—200, 300 years ago, a museum wasn’t a museum of a particular thing, it was a museum of everything. We don’t think all museums should be that, but we think there’s a place for that kind of museum, kind of an encyclopedic museum.

Would you say then that there’s anything in particular that unifies everything you have on display?

There are definitely underlying, unifying principles to what we do, but sometimes they’re kind of hard to discern, or hard to define. We have a motto, which you actually almost never see in the museum, but it’s “Un translatio nature,” which means “nature as metaphor.” That doesn’t really sum things up so much, but it actually is meaningful to us, because the kinds of things we like to put in the museum tend to be either natural phenomena or man-made—which, you know, there’s no real distinction between what’s man-made and what’s natural, because humankind is pretty natural as far as I can tell. We find ourselves gravitating toward material and phenomena that have meaning in and of themselves, and that also suggest other levels of meaning—kind of radiating spheres of meaning.

It’s interesting what you said about the line between man-made and the natural world being sort of blurry. To many people—and I always kind of thought this until I went to your museum—science and art are mutually exclusive. Some say it’s science’s job to tell humans that we’re not important and art’s job to declare that we are. How do you make them work together?

Essentially it goes back to a 17th-century or even earlier designation of artificialia and naturalia—what is artificial and what’s natural. It’s kind of an act of hubris or pride, I think, that things that are made by humankind are in some way out of the natural order. We’re certainly, absolutely, profoundly part of the great glittering chain of being. I mean, look at birds’ nests—are they artificilia or are they naturalia? A bird makes this gorgeous nest, and that’s considered a natural artifact—so why is that different for humans?

There was a moment when I was probably just turning 19—and it was through nothing I did, there just kind of came to me an opening of my mind and my understanding. It was inexplicable, but it gave a level of meaning to my understanding of life that I had never had previously. That experience lasted over a period of days. Towards the end of it, I became afraid that…I was just very concerned to not lose the understanding that came as part of that experience. And really, that moment has had a profound effect on how I spent the rest of my life and spent the whole of my life’s energy.

Do you feel like you’ve done justice to that realization?

I think that in itself says enough, the fact that it is indescribable. What were you like as a teenager? What were the biggest influences for you at that time?

After that [epiphany], there was a certain change in my external demeanor. Prior to that, I was somewhat introverted, but I still had a pretty active social life. But after that experience I became more introverted and spent a great deal more time reading and trying to delve into areas of human activity or natural phenomena that reflected the kind of understanding that had come to me. I began to read Eastern philosophy—and this was not too easy to find at the time, in 1965; the culture has changed enormously since then. I [also] became interested in medieval times. I felt that… [Tavi’s dog won’t stop barking] Who is your dog?

I know, I’ve been quietly typing all-caps emails to my dad asking if he can let her in—

It’s driving me crazy! I’m upstairs and she’s right outside by my window, and I’ve been trying to quietly ask my dad—

You don’t have to quietly do anything! You can go tell him if you want to!

I think I will if you don’t mind; really quickly I’ll go let the dog in!